Simple and pure Potions and Provisions 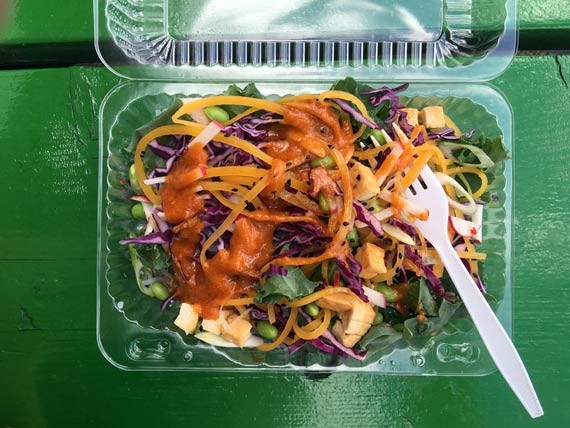 Annie Brace-Lavoie met Jenner Cormier in a bathroom in Toronto. They were laying tile, working on the mosaics in the bathroom of Bar Raval, where they were both a part of the opening team. Cormier worked the bar at the restaurant while Brace-Lavoie was a line cook.

Before Raval, Brace-Lavoie worked in the kitchens at Nora Gray, Buca and Grant van Gameren's other Spanish restaurant, Bar Isabel. Cormier is the award-winning Halifax bartender who put Noble on the map before being named Canada's Best Bartender in 2013 and then moving to the big city.

The couple moved back to Halifax in January, and started up Potions and Provisions as a short-term way to continue working with food and cocktails as they long-term plan. After a few food and drink pop-ups at Noble, they settled into their business at the Seaport and Alderney farmers' markets.

"We kind of stumbled upon a few restaurants and takeaway counters in Toronto that were doing veggie-style bowls and vegetable-heavy meals that we fell in love with," says Cormier. "We both really love to eat vegetables, and thought it would be a fun project to work on together to get our foot in the door at the markets."

The Spanish and Italian cooking she honed her skills on in Toronto, Brace-Lavoie says, inspires but doesn't define her. "I think one of the most amazing qualities that you'll find in both those styles is that there doesn't need to be an over manipulation of ingredients to have an unbelievable dish. Simplicity and treating your ingredients with care and respect will more likely give you a wonderfully balanced plate, rather than trying to reinvent the wheel and losing the integrity of your ingredients in the process."

Potions & Provisions excels in its simplicity. The noodle bowls have slice and curls of fresh, crisp vegetables, sweet potato noodles and bright, punchy sauces. The spotlight on local vegetables, things Brace-Lavoie finds in the markets where she sells.

Working at the markets has been a boon for Brace-Lavoie and Cormier simply because they have gotten to know lots of suppliers. "We wanted to meet the farmers and foragers, and the honey people, and the mushroom guy. We wanted to be part of that community." As for their long-term plans? Those are a secret, a potion still in the making. So for now, pick up some provisions.

Syd Delicious is hot and ready