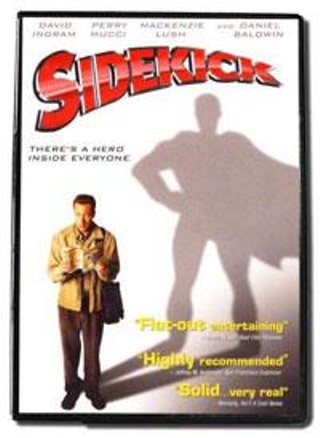 Sidekick
Blake Van de Graaf
(Maple)
An indie spin on the superhero genre, Sidekick explores its themes through conversation. The action is subdued; Victor (David Ingram), the film’s hero-in-training, uses his telekinetic abilities for the mundane —protecting coffee mugs from shattering, levitating liquor bottles and kicking serious butt at softball. This quiet approach is welcome—one of the more interesting scenes in Batman Begins featured Bruce Wayne sitting on the carpet, sipping orange juice and making plans. Computer consultant and comic aficionado Norman Neale (Perry Mucci) discovers co-worker Victor’s hidden talents, and becomes determined to train the softball ace for greatness. Sidekick then takes the conventional trappings of the superhero origin story—personal trauma, tights—and tweaks them. The film ends up in unexpected territory. But none of this promise makes the movie good. This is the first time at the helm for director Van de Graaf and writer/producer Michael Sparaga. Most of the film’s budget came from credit cards, and while many problems can be chalked up to Sidekick’s low budget, the film’s greatest failing cannot. Sidekick’s dialogue is badly timed, making the entire production stilted—jokes fall flat and the actors seem uncomfortable, a discomfort that transfers to the audience.
—Lindsay McCarney