Despite government cover-up, The Coast has learned Nova Scotia's beloved weather-predicting groundhog has died and been replaced multiple times. 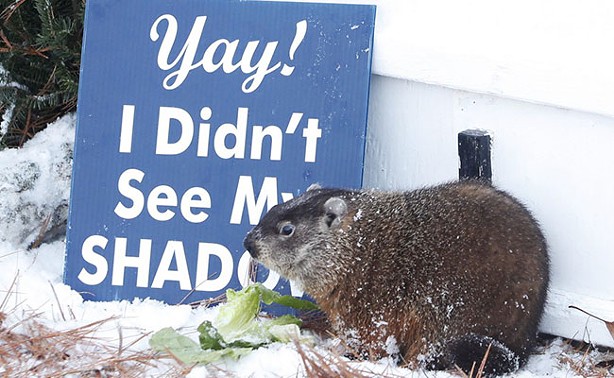 VIA NOVA SCOTIA
The current "Sam," as pictured in his home at the Shubenacadie Wildlife Park.
The legend of Shubenacadie Sam is built on a wildlife park of lies.

Officially the government maintains its beloved prognosticating groundhog is “ageless,” but a year-long The Coast investigation has learned several different rodents have been given the identity over the decades.

The animal predicting spring’s arrival this week will be the fourth “Sam” since the Shubenacadie Wildlife Park started its Groundhog Day event 29 years ago.

Like some kind of furry Doctor Who, a new critter is chosen to inhabit the role upon their predecessor's death.

So why is the government hiding this information from taxpayers?

“We try to preserve the mystery a little bit, for the kids,” admits Bruce Nunn, spokesperson for the of Natural Resources.

But even a child’s Nova Scotian-taught math skills could see through the smokescreen of misinformation regarding Sam’s age.

In the wild, groundhogs can survive anywhere from two to six years. Their lifespan in captivity is considerably longer, but not enough to account for Sam’s 30-year career.

The authority on the subject is Richard Weigl’s Longevity of Mammals in Captivity: From the Living Collections of the World, which contains a long list of species and their ages of death as observed in numerous zoos.

The oldest recorded groundhog, also known as a woodchuck, was a Quebec male who died in 2001 at the age of 14 while a resident of the Calgary Zoo. Other closely related species, such as the alpine marmot, have been recorded living as long as 18 years in captivity.

The current Sam will celebrate his 12th birthday in April.

The province, however, seems reluctant to come clean about its groundhog false flag.

“[Sam] is a ‘seasoned’ predictor,” writes Nunn in an email to The Coast from last February—suspiciously sent after Groundhog Day had already passed. “Since he started predicting, he has always been only one Sam.”

February 2 is known all over North America for the tradition of elected officials and trained journalists gauging the end of winter based on whether or not a ceremonial rodent observes its own shadow.

It’s a bit of pomp and circumstance that distracts from the bleak cold and helps avert attention away from our own shambling mortality.

Even former TV meteorologist and current Halifax municipal councillor Richard Zurawski praised the event this week during a meeting at City Hall.

“I’m still waiting for to make this a municipal holiday,” joked Zurawski, who’s usually the kind of humourless Science Guy who scoffs at such folksy hokum.

Sam’s fame comes from being the eastern-most groundhog on the continent, and the first to predict spring’s arrival. His colleague, Two Rivers Tunnel in Cape Breton, lazily doesn’t get around to looking for his shadow until almost noon.

The province has eagerly sought to capitalize on its golden groundhog, turning him over the last several years into a bonafide online brand.

“In these modern times, it is especially important that Sam maintain contact with his broad fan base, so he spends time on Facebook and communicates via Twitter,” reads the Wildlife Park’s website. “He is especially fond of social media and has enjoyed his time as the focus of a live webcam broadcast, the SamCam.”

Members of the Marmota monax species usually spend their winters hibernating a metre below the frost line. They awaken only a few times to expel waste.

Unlike his wild brothers and sisters—and some of his prognosticating colleagues—Sam doesn’t hibernate. He spends his winters indoors, enjoying a special heated enclosure. Given his day job, that’s probably to Sam’s benefit. Digging up a hibernating groundhog can be traumatic, and a matter of luck.

According to a 2007 Nova News Net article archived online, Shubenacadie only had to excavate a hibernating groundhog once.

The previous Sam was discovered dead inside his heated home, causing something of a panic to find a replacement the big day.

Wildlife Park education coordinator Susan Penney tells reporter Lindsay McCarney that heavy digging equipment had to be used to pry the new Sam out from the frozen ground.

“It was difficult to know where the groundhogs were, she says. And, she adds, ‘you run the risk of damaging the animal while trying to dig it out.’”

Sam will be greeted Friday morning by a procession of bagpipers, local dignitaries and probably Brett Ruskin. He’ll be beckoned into the cold air at to give his ruling on winter’s end.

Officially, the province stands by its belief that Sam’s predictions are always accurate. “Whether the weather agrees is inconsequential.”