Show with the flow

Our Bodies, Our Blood explores menstruation through art 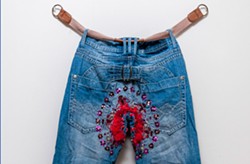 "It's such an intersectional topic," says Alanah Correia, the curator of Our Bodies, Our Blood, a menstrual-themed art show opening at Plan B on Tuesday. "It's not just about femininity and gender issues but it's also environmental, political, religious and so on."

After attending a fertility workshop with a pal last January, Correia realized that there was a lot about the natural cycle of a woman's body she didn't know and was never taught.

"I thought, 'Oh my god, why isn't this information more accessible?' Especially in terms of how menstruation is portrayed in culture and why we have shame, and then why we have body shame in general," says the NSCC photography student. She started working with local women's shelters to raise money and awareness about menstrual product access in marginalized communities.

By early summer, with the financial help of NSPIRG, Correia created the group art project Our Bodies, Our Blood, which will feature over 30 pieces of art relating to menstruation from all over the world, including Australian activist Margaret Kalms, a handmade quilt by local artist Cheryl Hann, embroidery by Fiona Legg and Sam Logan and paintings, videos, artifacts and more. She says the quality of the pieces show the extent to which periods are unique, but still a shared and yet unexplored experience.

"By talking about menstrual health, maybe we can break down the stigmas about periods in the media, advertisements, politics. It's an OK thing to have, there's no shame," says Correia. The DIY show is also supported by Radstorm and Inkstorm. "Menstruation," she says, "has been happening to bodies since the dawn of time."