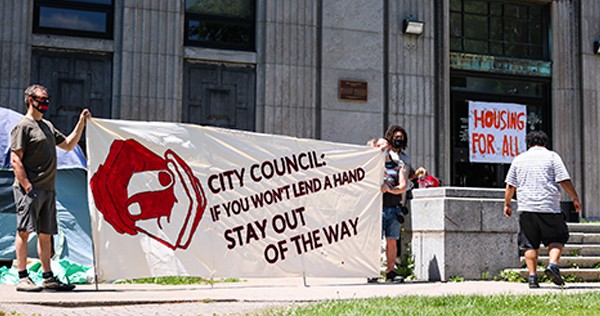 “The only reasonable solution to this crisis is housing for everyone on the streets, now.” THE COAST

Hundreds rally for “crisis shelters” after city says it will tear the temporary housing down.

Hundreds of people rallied in downtown Halifax on Sunday afternoon in support of several temporary shelters that the city plans to demolish. Halifax Mutual Aid, a local volunteer group, organized the rally at the city’s old central library on Spring Garden Road. That library has been shut down since 2014, and HMA built several of its wooden, shed-like shelters—which it calls “crisis shelters”—on the property.

“While the HMA crisis shelters are inadequate in many respects, they give occupants a level of autonomy that can only be matched by permanent housing,” HMA spokesperson Campbell McClintock read from the group’s statement.

“These crisis shelters are tools for people who have nowhere safe to go. These shelters can help folks weather the housing crisis that is wreaking havoc on our city.”

10 things in Halifax’s 2021/22 budget to be hopeful about: Staff to work on affordable housing, new parks, accessible taxis and more.

Last week, HMA had 13 crisis shelters built across the Halifax Regional Municipality. The shelters were fully occupied and, at the time, the group had more than 20 people on its waiting list.

The volunteer group started building the shelters in January. But last week CTV News reported that the city is planning to remove the shelters (no date has been set for the removal). Apparently HMA didn’t have permission to build the shelters on municipal property, and structures built for temporary or permanent accommodation cannot be placed in parks according to bylaw P600.

In January, the city said occupants of the shelters wouldn’t be evicted until they had somewhere else to live. Now, the city plans to demolish the shelters and house the occupants in hotel rooms for two weeks—but there are no firm plans for what will happen after that time.

“This is not a solution by any reasonable measure, and it is a cowardly, half-measure that puts profit before people,” McClintock read from the statement. “The only reasonable solution to this crisis is housing for everyone on the streets, now.” 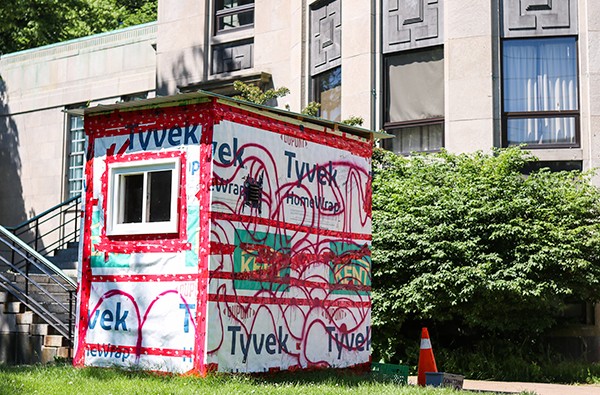 the coast
Halifax Mutual Aid built 13 crisis shelters across Halifax since January; they’re full and the waiting list has more than 20 people on it.

On June 17, downtown Halifax councillor Waye Mason tweeted: “I believe the province has adequate shelter for all the folks living rough right now, and hotel rooms as a very temporary measure for folks heading into an apartment via Housing First.”

But McClintock, who’s also a frontline resident support worker at Out of the Cold Shelter, said he thinks Mason is wrong about the situation.

“For numerous years, folks working at these shelters have [had] to turn away people from a bed every single night because there are no beds available—it’s super messed up,” McClintock said at the rally. “So, for him to say there are enough beds totally negates the reality of people who get turned away from shelters all the time and the people who have to turn them away.”

“Shelters are not housing and we should not normalize shelters as a solution to this crisis,” he said. “Shelters are a bandaid solution for a system that would rather homelessness be invisible than provide dignified, affordable accessible housing for people of all classes, genders and races.”

Nova Scotia needs to do more to ensure its shelters embody harm reduction: “Every overdose is a policy failure.”

Andrew Goodsell was the first person to take one of the temporary shelters at the old Halifax Memorial Library location. He said he believes getting rid of the system of shelters is the key solution to the problem.

At the rally, Goodsell said he specifically asked for a temporary shelter to be built at the old Halifax Memorial Library because Spring Garden Road is heavily travelled by pedestrians.

“I wanted the whole world to see me give the city the big old middle finger and say, ‘House me,’” he said. “House the homeless, provide the places. Once you hit the street, it is a downhill spiral. Every day it rained on me, I cried.”

Goodsell currently lives in a one-bedroom apartment he received from Shelter Nova Scotia. But he said he quickly became used to being homeless and travelled across Canada without a permanent home.

“I’ve learned that it’s not only here in Halifax but across our country that we tend to spit on our homeless,” he said.

“The reality is, there’s no reason for anyone to be out on the streets. I’d like to think that we consider ourselves a modernized country. But how primitive is it that I spent six months here in Halifax during the winter on the streets because there’s no such thing as affordable housing?”

According to the Affordable Housing Association of Nova Scotia, Halifax hasn’t made measurable progress on homelessness. Around 400 people in the city are homeless, with more than half of those people being homeless for six months or longer.

NSCAD University student and Nova Scotia ACORN member Sage Beatson said the province should be redirecting some of its spending toward the housing crisis. That includes the $70 million funding agreement the province made to build a new waterfront art gallery.

“I feel every level of government is failing us,” Beatson said at the rally. “I wish we had a government that was tireless and ferocious and fearlessly on our side, but I just don’t see it.

“I do see people like that in my community.”

Currently, HMA is working toward getting permission from various landowners to build more temporary shelters. The group has one built and will continue building more in the coming weeks.

“We must recognize that homelessness and our housing crisis is a public health emergency, and that trickles into mental health, safety and overall community well-being,” McClintock said at the rally. “The best possible investment that you can make in our communities is by providing accessible housing for everybody.

“For Waye Mason to throw up his hands and say, ‘There’s nothing better we can do right now,’ we know it’s a lie.”