After seven consecutive Best of Food wins for Best Shawarma, Mezza Lebanese Kitchen’s dreamy chicken pita has been deemed as unbeatable as it is delicious. We unwrap the story behind our 2014 Hall of Fame inductee. 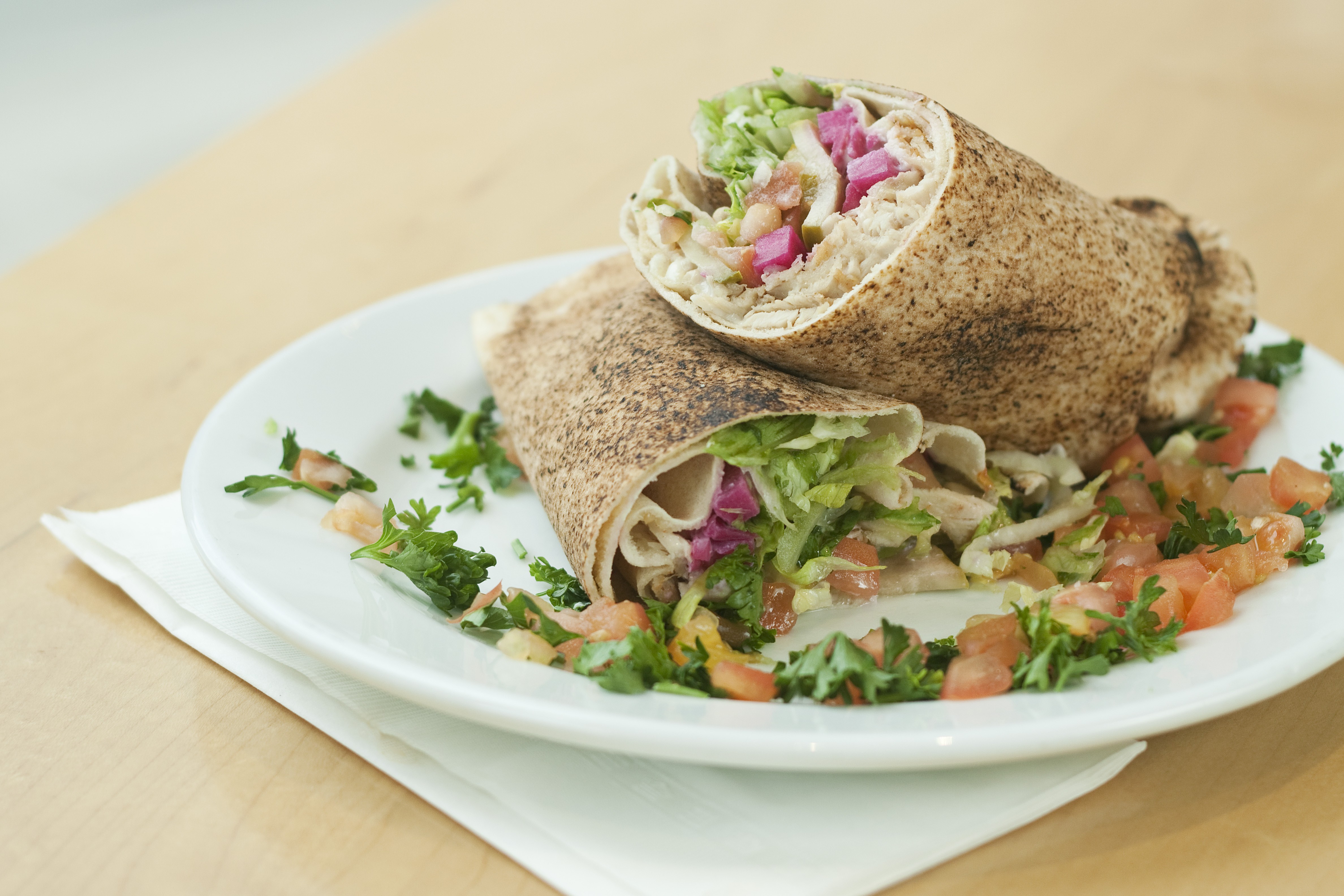 It’s a sunny Sunday afternoon and a small group sits in the dining room of Mezza Lebanese Kitchen, where a guide from Local Tasting Tours regales them with the sweet and spicy story of the Halifax donair. Moments later they are given samples of something a little more savoury, and the “oooh”s (“ewws”?) over the donair turn into “ahh”s as they bite into the real secret to Mezza’s success: the shawarma.

Below the dining room, through a tiny maze of corners and doorways, sits a small prep kitchen custom fitted with stainless steel counters and sinks, and a low table where the rod from one of the restaurant’s three vertical roasters points hungrily at the low ceiling. The dull, choppy thwack of a knife echoes through the room as a prep chef prepares lettuce and tomato for a Greek salad. Tony Nahas emerges from the walk-in fridge with two 20-pound boxes of marinated chicken breasts.

Nahas runs the Mezza Lebanese Restaurant Group with his brother, Peter. Their father, Elias, got the ball rolling with Tony’s Donair at the Halifax Shopping Centre in 1990. After rebranding as Venus Pizza, and now to Mezza, the future of the group is in the brothers’ hands. And Nahas feels that two generations in, if nothing else, they have finally mastered the art of shawarma.

When he was 14, Nahas started working in the kitchen of the Shopping Centre’s Venus. Then, “after high school,” he says, “my father said, ‘Listen, what are you gonna do? You can go to school or you can go to work. If you go to school, I wanna see marks.’ I woke up the next day and put on my Venus shirt.”

Nahas’ coat stays pretty pristine as he handles the chicken, which is covered with a gluey yogurt marinade. With the boxes open, the small kitchen fills with the potent scent of garlic, tart lemon and warm spices like allspice, cloves and cayenne. It smells, at once, incredibly familiar and impossible to completely put your finger on. Only two people know the exact recipe for Mezza’s shawarma marinade. While there is one employee in the Burnside location who knows some of the basics—“he just blends it and puts it together,” says Nahas, “just puts two of this, one of this and a little bit of this”—only Nahas and his father know the recipe. “I don’t think my brother even knows. We have a recipe for the chicken, a recipe for the beef shawarma and the garlic is written down. And the spices for the fries. Those are all locked down.”

In order to lock down the chicken for the shawarma itself, Nahas starts the process by impaling the first of 12 single chicken breasts on the vertical spit’s rod. He slides the others down in a criss-cross composition that builds a tight foundation for the double-breasts that fan the tower out into the signature shape of the shawarma cone. The marinade sticks thickly to the plump chicken breasts, not a single drip to drop.

“I started off with my dad right beside me,” he says as he carefully skewers each breast, making sure to hit a sweet spot that will stop the breasts form splitting from the weight. “He’d say ‘Take the chicken off, start again,’ and I’d be like ‘It doesn’t matter, dad!’”

But, of course, it does matter. “It’s oddly built,” Nahas says, as he makes the cone flare out farther as he gets to the top. “I’m not saying I’m the best, but I’ve been doing this for 14 years now. I just know how to do it.” As he works, he stops now and then to slide a butcher knife along the sides, trimming some of the sloppier ends, nicking off bits of skin and fat that hang limply along the side. “You have to give it some shape a little bit; this will keep it uniform. And the trick to keeping it moist is this skin that is left—that’s what I’m cutting off—I tuck it in the middle. Once the chicken gets smaller then there’s still fat that melts and keeps it juicy from the inside to the outside. You’re not allowed to just put it up, cook it and turn it off; the heat never comes off it, so you have to learn how to keep it moist.”

By the time the cone is fully formed, there are 76 chicken breasts in the stack. Once it’s ready to shave down, this will actually be a relatively small serving, lasting only three or four hours of service.

On weekends they use twice that amount of chicken on a single spit, making shawarma cones that climb to around 100 pounds. A jerry-rigged clamp on the top of the rod lets them slide it onto a pole that they can use to carry it upstairs from their basement prep kitchen, like Ewoks carrying Han Solo to an Endor Feast. Nahas puts it all pretty simply: “We go through a lot of chicken.”

In fact, Mezza goes through four tonnes of chicken breast—not whole chickens, just chicken breasts—a month. And the chicken, brought in fresh from Nova Scotia’s Eden Valley Poultry, is never frozen. “If it comes in on Monday, it’s cut on Monday. Then Tuesday it’s marinated and we use it on Wednesday.”

Up in the restaurant, Nahas puts together a classic shawarma wrap. He slides a large, round-tip slicing knife down a cone that has been whittled down to the core, slices of still-tender chicken falling like leaves from a tree. A second, untouched cone looms huge, a nearby tube of donair meat almost trembling with inadequacy. He adds the sliced chicken to an open pita with chopped lettuce, diced tomato, paper-thin dill pickles and fuchsia sticks of pickled turnip.

“The garlic sauce is also very important,” says Nahas. “Other places will just use garlic granules and blend it with oil and lemon juice, or some people put mayonnaise in it.” He shakes his head.

“Me and my brother travel and hit restaurants,” he says. “We went away a couple of months ago to Montreal and Toronto for four days and all we did was eat and eat and eat from shawarma store to shawarma store, just to see what they’re doing differently. And, actually, I think we’re on par with everyone, if not next level.” The next level for the Nahas brothers means taking their classic Lebanese menu items and putting some modern and international twists on them. Like the Lebanese wrap, a favourite at Mezza: it has garlic, pickles and French fries.

“In Lebanon, that’s how they serve them. So we go that idea there, and then we were like, ‘What else would be cool to do?’ You get people from Egypt and Saudi Arabia coming in, and each country does something differently,” he says. “In Saudi Arabia they’ll put ketchup, mayonnaise and garlic on it just with chicken and then a few fries.” That’s on the menu now, too.

The tour group is long gone, and while it’s the middle of the afternoon there is still a steady trickle of business streaming in, most people ordering shawarma wraps. “You get surprised with who comes in,” says Nahas. “You get the oddest people sometimes and just wonder ‘How did you hear about shawarma?’”

Click here to find the full Best of Halifax Hall of Fame.

Everything you need to know for Best of Halifax 2017