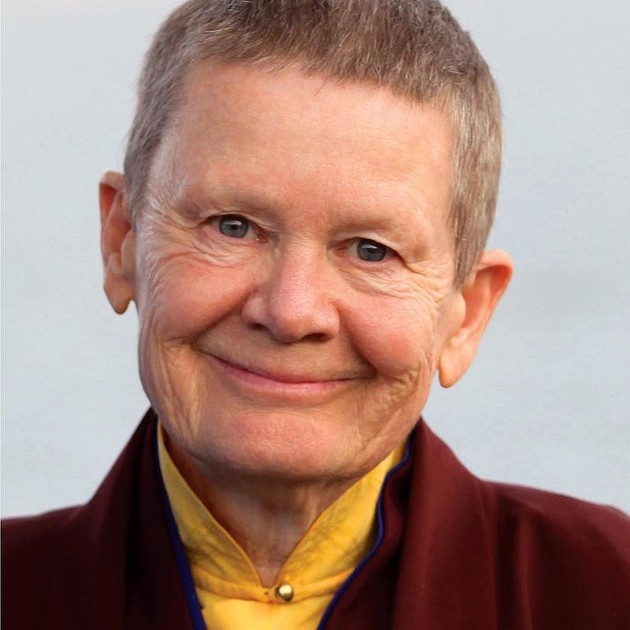 via Pema Chodron Facebook page
In her resignation letter, Pema Chödrön asks the Shambhala board to find a "path forward" with accountability for the years of sexual abuses.

One of Shambhala Buddhism's most prominent figures announced she's stepping down as a senior teacher. Pema Chödrön, best-selling author and Buddhist nun, has had a decades-long association with Gampo Abbey in Cape Breton. She sent a letter to the Shambhala board announcing her resignation from her position as an acharya, then shared it more broadly through the Shambhala Times, the Halifax-headquartered Shambhala community's global news site.

"When I read the recent letter from the Sakyong saying that he wished to start teaching again and would do so for all who requested, I was disheartened. I experienced this news as such a disconnect from all that's occurred in the last year and half," Chödrön writes. "It feels unkind, unskillful and unwise for the Sakyong to just go forward as if nothing had happened without relating compassionately to all of those who have been hurt and without doing some deep inner work on himself."

Osel Mukpo, known in Shambhala as Sakyong Mipham, "stepped away" from teaching and administrative duties at Shambhala in February 2019, after some of the allegations of sexual assault and clergy sexual misconduct that were documented in reports from Buddhist Project Sunshine were confirmed by an independent investigation by Halifax law firm Wickwire Holm. Mukpo's return to teaching comes at the request of a small group of students in Europe, and is sanctioned by the Shambhala board.

"It feels unkind, unskillful and unwise for the Sakyong to just go forward as if nothing had happened." —Pema Chödrön

Chödrön was called out in one Buddhist Project Sunshine report for telling a woman who says she was sexually assaulted that her assault didn't happen and, if it did, "you probably liked it." Chödrön subsequently apologized to the woman.

In her letter, Chödrön urges the board to consult broadly across the Shambhala community for ways to move forward with full accountability for the allegations that Mukpo and other teachers abused students—and that the board knew and did nothing. In response the board issued a statement of its own, noting it intends to meet with her to discuss her ideas. The statement includes this further note from Chödrön:

"I have no intention of leaving the Shambhala community and would always do my best to be there for anyone who might need it. However, if no path forward can be found, that would break my heart, and I'm not sure what I would do."