The lauded artist shares a trove of works reflecting the city he loves. 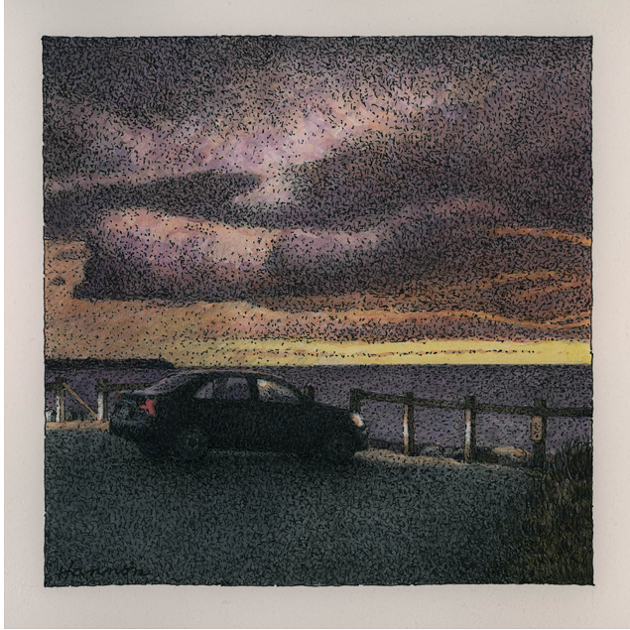 Paul Hannon
"In a Dark Four Door", a 2019 work by Hannon that's an A-1 example of his "hand-hewn" style.
Since moving to Halifax in 1989, Paul Hannon has been primarily recognized for his paintings of urban and coastal scenes in Atlantic Canada. But in his new show at Chase Gallery, Selected Drawings & Watercolours (co-curated with Coast art critic Mollie Cronin), Hannon’s drawings take centre stage. Dating back to 1994, the show includes swimmers in Chocolate Lake, harlequins, hurricane aftermath and his own imagined ancestors. Hannon cites influences like Robert Crumb and Edward Hopper to make images he calls “hand-hewn.”

“I want the edge to be recognizable as being handmade,” Hannon says. “I’m using a style of drawing that I’ve developed myself based on using a pen and pencil and watercolour, and I kind of isolate the image as if it’s a print.”

“The closer you look, the more handmade they look,” he explains. “And a little bit further away, they can actually start looking like a photograph.”

Hannon created sixteen new works for the show, including a watercolour of the dearly beloved (and recently departing) Newfoundland Grocery Store. He didn’t know the store was on the verge of closing when he decided to draw it.

“I’m like the death knell of buildings,” Hannon laughs, a little sadly. “I have this habit of picking buildings that are about to close and painting them.”

Hannon’s drawings of Hurricane Juan’s aftermath also document a fleeting, volatile moment in time. After the 2003 storm, Hannon drew many streetscapes of uprooted trees, fences and strewn debris—sights now made newly familiar after Hurricane Dorian. Juan was “one of the first times in Halifax we directly experienced climate change,” Hannon points out. Looking at Hannon’s drawings, it’s easy to see, as Hannon says, “this is part of a pattern now.”

Selected Drawings & Watercolours is free and open to the public every day except Sundays until January 30 at the Chase Gallery (6016 University Avenue).

Plan your night moves with our Nocturne 2019 guide