Council votes to release confidential info, but defers decisions on park until September. 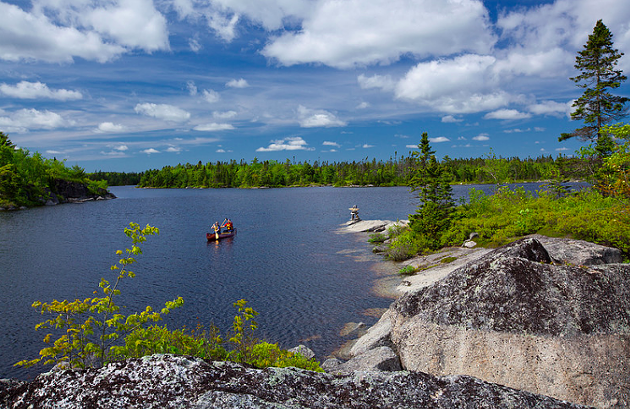 A secret map that may hold the future of the Blue Mountain-Birch Cove Lakes park will be released to the public, but it’ll take a few more weeks to see the light of day.

Halifax regional council unanimously voted on Tuesday to defer the release of map “3A” and its relevant materials until August 31, so that its contents can be discussed at council’s September 6 meeting.

That decision was reached after council spent over an hour talking in circles about whether the discussion to release the map had to take place in camera.

The debate centered around information that councillor Russell Walker apparently had in his possession showing “flaws” in the map. What those flaws related to, what the map showed and even why it was created, couldn’t be openly discussed.

Watts stressed 3A shouldn’t be given the “illusion” of importance as being HRM’s preferred choice for the Blue Mountain-Birch Cove Lakes lands. “It’s not.”

The map presumably shows a revised set of boundaries created by staff for the proposed regional park, and differs from the map previously used in the city’s Regional Plan that includes lands owned by private developers. 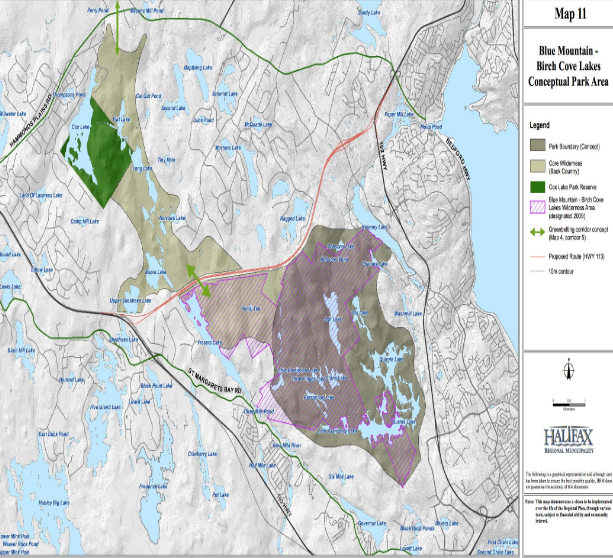 via CPAWNS
The proposed park boundaries as outlined in HRM's Regional Plan. Click here for a collection of other maps published about the Blue Mountain-Birch Cove Lakes park, including what the Annapolis Group and other private owners want to develop.

Those 1,300 acres along the area’s south-east corridor are mostly zoned urban reserve, and unable to be developed until after 2031. Land owners the Annapolis Group and Susie Lake Developments want $6 million from HRM for the properties. The municipality values the lands closer to $2.8 million.

Whatever the price, the cost HRM would have to pay for the property could considerably increase if the secondary planning process for the lands were initiated—as councillor Reg Rankin seems to want.

The District 12 councillor brought forward a motion at Tuesday’s meeting directing staff to start the public consultation and hearing process to amend the planned boundaries for the Blue Mountain-Birch Cove Lakes regional park, release map 3A to the public and proceed with secondary planning for those corridor lands not within the proposed park’s new boundaries.

Rankin’s motions were deferred to September 6 as well, but it should have been rejected outright according to Canadian Parks and Wilderness Society biologist Chris Miller.

“There is absolutely no basis for proceeding with secondary planning now,” Miller writes in a statement to The Coast. “The biggest bargaining chip the city has to acquire the lands for the regional park is to grant development approvals outside the park in exchange for the lands. To advance secondary planning without acquiring the lands as part of that deal would likely be a fatal wound for the city and the regional park.”

Miller says even the recent facilitator’s report by Justice Heather Robertson—loudly criticized for siding with the developers—acknowledged that HRM has enough developable lands to meet residential growth needs for the next three decades. He hopes Rankin’s suggestions to open up the BMBCL lands to secondary planning will be soundly defeated come September.

“It's not clear why Rankin is bringing this forward,” Miller writes, “but lots of people are speculating.”

Remo Zaccagna, with Local Xpress, reports that Rankin declined repeated requests to clarify if he’s in favour of development on the proposed park lands during a tense scrum outside of council chambers.

Global News reported yesterday that the Annapolis Group’s Hawthorne Capital donated $2,500 to mayor Mike Savage during the last election, $1,000 to Rankin and deputy mayor Matt Whitman, and $500 each to councillors Linda Mosher and Barry Dalrymple.

Council is currently awaiting two reports about Blue Mountain-Birch Coves Lake: one a response to the facilitator’s report, and another containing 1,500 public submissions about the proposed park. Those items, along with map 3A, will be discussed in September.