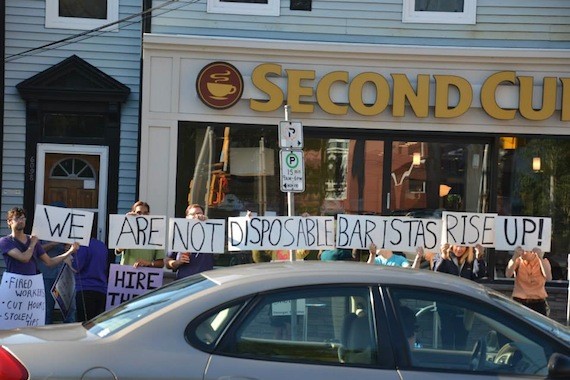 Second Cup franchise owner Kathy Attis disciplined and fired three employees following a union vote, she told the Nova Scotia Labour Board this month. After a union drive at her Quinpool Road cafe, she cut employees’ hours and fired three baristas, but said she did so to maintain order in the cafe.

When employees made up their minds to unionize, they felt entitled to run the cafe, she argued. “I’ve changed from a coach to a disciplinarian in the store. I like being a coach better,” she told the Labour Board.

Attis said she cut their hours because labour costs were far too high. Sales were down at the cafe prior to the dismissals, Attis and barista Shelby Kennedy testified. Financial records disclosed at the hearing confirmed this.

Attis said her accountant delivered the financial records the same day she received notification employees wanted to unionize. However, she said she wasn’t immediately aware of the unionization attempt because she had not looked at the hand-delivered notification, and did not see a union photo in the cafe.

SEIU Local 2 representative Jason Edwards testified that an unknown person posted the photo of six employees holding union cards with the caption “We’re voting yes!” The colourful photo was posted on a bulletin board that Attis passed every day, employees testified.

Attis said she first noticed the photo weeks later, in mid-to-late June, after she fired the employees. Of the six employees in the photo, Attis fired three, one quit and two continue to work at the store.

The Labour Board will make a ruling in coming weeks.