Weekday traffic was dwindling even before the effects of COVID-19 took hold, and many long-time vendors have packed up for greener pastures. 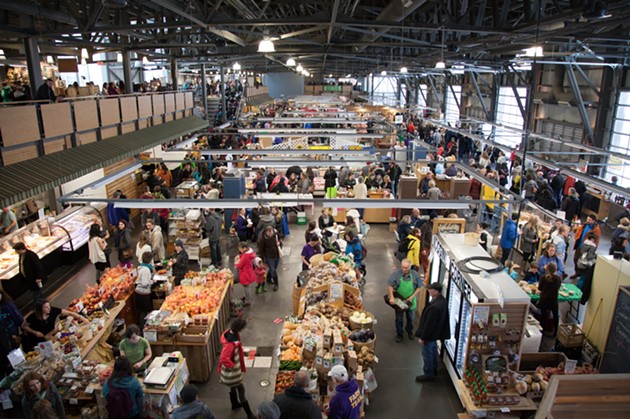 Instead of being a seven-day-a-week market as it’s been since before the Port Authority took over running the market in 2012, the market will now run weekends only from a new location. Between March and September, it will be located outside Pavilion 22 (the building after the Pier 21 museum if you're walking south), and in the colder months inside Pavilion 22, which previously was where cruise ship passengers disembarked.

“We’re not abandoning the market by any means, we want to really focus on what works well, and that’s that weekend market,” says Lane Farguson, spokesperson for the Port Authority.

Farguson tells The Coast that with tourism and cruise ship traffic grinding to a halt during the pandemic—the cruise ship season for 2021 was fully cancelled earlier this week—it made sense that the market would be able to move in there.

“It’s a building that has a very similar footprint to the existing building and it’s also heated during the winter,” he says. “Right now, we’re not using it for cruise and even when cruise resumes we don’t use it for cruise in the winter anyway, so it’s, in the sense of property usage this is a good fit and we’re really hopeful that it’s a good fit for the vendors as well.”

But why did the market need to move in the first place? Because over the past several years, the weekday market has been struggling to make ends meet.

“The market has never been a successful weekday market. Saturdays are awesome and Sundays are pretty successful as well, even Fridays we see some pretty good activity,” says Farguson. “But Monday through Thursday it just really has just never hit that critical mass that it needs in terms of traffic and even the number of vendors selling to make it sustainable really.”

District 7 councillor Waye Mason says the change at the market "wasn't a huge surprise" for him. "The sales—even on the weekend—are not what vendors and the people who came up with the idea all that time ago hoped for," he tells The Coast. "It was supposed to be able to pay for itself based on a lot more traffic coming through more regularly, and that just never happened."

Mason says HRM doesn't have any input on what changes are coming to the market, but the market situation is certainly not unknown to council. "This is a drama that’s been playing out since the Seaport Market and what used to be called the Historic Farmers Market split and this got built," he says.

Last year, the Port Authority had put out an expression of interest to find a new operator to reinvigorate the market. At first, it went well.

“We’re not able to name the groups but I can say that there was some interest and that this was going to be a good solution,” says Farguson.

B ut COVID-19 quickly took the wind out of those sails, forcing the market to close to the public from March through July.

“After, when it was safe to do so we were able to do a reopening of the market on the inside and we’ve worked to keep that open even through the second wave,” says Farguson. The market slowly re-opened as restrictions eased, but even now the 84 vendors is a far cry from the 200-plus that would normally be set up at the market on a busy Saturday.

“We’re also restricted in the number of people we can have, the number of customers that we can have going through the market at any given time as well. Those numbers have been increasing as doctor Strang and premier McNeil ease the restrictions. But even with that though it’s nowhere near what we would see under normal circumstances,” Farguson says.

The cancellation of the cruise ship season saw another setback, meaning 300,000 fewer people set foot on the waterfront last summer. “Not all of them are going through the market but enough of them are that it certainly helps to keep them animated,” says Farguson. “Add to that the downtown office workers who might grab a bite to eat on Wednesday, Thursday or Friday, that crowd is also greatly diminished these days as well and continues to be so. It’s not one thing creating challenges, it’s a number of different elements that we’re trying to work through.”

Though Farguson says the Port Authority tried many ways of marketing and creative methods to get through Covid—like opening up the cruise brow walkway to allow Haligonians to eat their market goodies while staying socially distanced—nothing really stuck.

“We’ve tried various things over the years to try to drive that weekday foot traffic but none of it has really taken hold,” says Farguson. “Even before Covid hit, if you’re a regular at the market you will have noticed that there are just fewer and fewer weekday vendors, especially over the last year, and that after Covid it’s really had an impact on the foot traffic and on the vendors that are able to make a go of it there.”

And so the move to Pavillion 22 was decided. In November 2020, market vendors were told to leave by no later than March 12.

“It is a mix of emotions. There was worry also and then there was excitement. What new things will it bring for us?” says Jaskirat Rekhi, who operates Amin’s Indian Food along with his wife Shelly.

Rekhi says he and other vendors were made aware of the change around the end of November, but they already knew something was happening. “We already know, market had the meeting in February before the pandemic, 2020, and they told me they are looking for a different model for somebody to take over the whole market and to reinvent the market. So they gave us a plan and it was pretty much clear there will be changes in the coming year.”

Even before Covid, Rekhi says some vendors left the market for greener pastures. “A lot of people have already left the market, but they all have been into better projects, I will say. Like there was Thanos Kitchen who has moved to Montreal and he’s looking forward to a great new start,” he tells The Coast in a phone call.

The food stall will have to purchase some new equipment to set up outside, but Rekhi is overall optimistic. “If it makes the market successful, then this is just a small change,” he says.

Farguson says the Port Authority is still working out some details for the new market, like the price it will cost to rent a table. “I can tell you with certainty that those discussions are taking place, but we don’t have those answers yet,” he says.

Google Maps
The parking lot outside Pavilion 22 will soon be filled with vendor tables every weekend.
The soon-to-be-former Seaport Market building, which opened in 2010, won’t sit unused for long. The Port Authority has plans to create a “transportation hub” in the building called The PIER.

In simpler terms, Farguson says this will be a combination of local start-ups and international companies in the cargo transportation sector.

“We’re bringing those different players together under one roof. They’ll be leasing space from us and then conducting their business in this building. Either their own business or working collaboratively with each other,” he says.

Right now, Farguson says the Port Authority can’t give many details but it’s in talks with CN Rail, PSA Halifax—which operates the South End Container Terminal—and Farguson adds that they hope to procure top-tier talent from local colleges and universities. (🙄)

But Farguson says the “old” Seaport Market hopefully won’t be entirely empty of food vendors. The Port Authority says the seven permanent storefronts with separate entrances—only one of which is currently occupied, by Gourmandises Avenue Chocolatiers—are being offered to current vendors.

“We’re hopeful that it will be a good fit to have a mix of restaurants and retail in those spaces that can serve the office workers that are working at the living lab as that gets up and running,” says Farguson.

Farguson's optimism isn't matched by all market vendors, but some are feeling pretty OK with the change. Ciro Comencini, owner of Roma Cheese says “we don’t have to be worried, we have to be loyal with our customers and our customers be loyal to us.”

Comencini says he’s seen a decrease in overall foot traffic during Covid, but more customers know what they want. “There is less crowds like before, it was walking around, a lot of people were walking around to have a coffee, to have a talk. They still come, but mostly people come to shop for the market now,” he says during a busy Saturday morning in between selling balls of fresh mozza.

Comencini's optimism is also due to the fact that he's only ever sold at the market on Saturdays, after making his cheese fresh on Friday. He’s not worried about going outside either, adding that it’s the probably safest thing to do during Covid.

“I come from Italy and it’s always outside, the markets there,” Comencini says. “My product, I don't [have] issues because we got coolers and it’s all packaged. But I don’t know about other people with different products, how it’s going to affect them.”

With vendors like Chenpapa and their handmade steam buns leaving the market entirely, and other vendors uncertain about the future, the market will undoubtedly look very different by spring 2021.