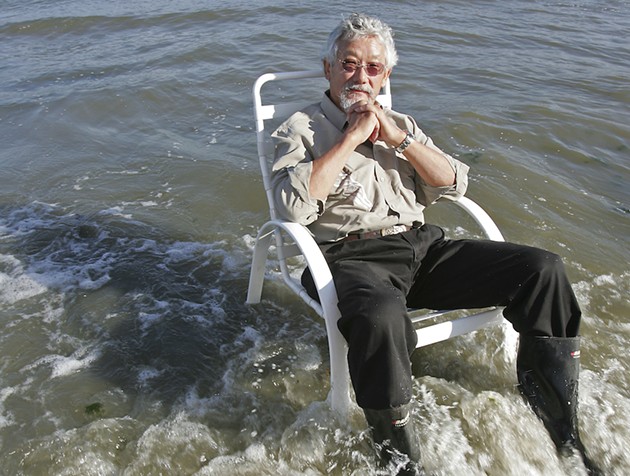 Kent Kallberg via the David Suzuki Foundation
Seeing terms like “post-truth” and “alternative facts” gain traction in the news convinces me that politicians, media workers and readers could benefit from a refresher course in how science helps us understand the world. Reporting on science is difficult at the best of times. Trying to communicate complex ideas and distill entire studies into eye-catching headlines and brief stories can open the door to misinformation and limited understanding.

Recent headlines about a climate study, “Shifting patterns of mild weather in response to projected radiative forcing”, in the February 2017 issue of Climatic Change illustrate the predicament. Some news outlets implied the study showed countries such as Canada and the U.K. would benefit from increasingly frequent “mild weather days” brought on by climate change. Many failed to convey the true take-home message: Climate change will have devastating consequences for human civilisation.

Just ask the study’s author, Karin van der Wiel, research scientist at the Royal Netherlands Meteorological Institute. She studied the frequency of mild weather days as a postdoctoral research associate at Princeton University and the U.S. National Oceanic and Atmospheric Administration’s Geophysical Fluid Dynamics Laboratory. She found a few countries, mostly in the mid-latitudes, will experience slightly more frequent mild weather—defined as days between 18 and 30 C with less than one millimetre of rain and dew point temperature not exceeding 20 C. But that’s not the whole story.

“The climate is changing in many places over the world and these changes are ongoing now,” Van der Wiel said in an email. “Globally, mild weather is decreasing and in many summers are going to be increasingly too hot and too humid to be considered mild. These are not desirable changes.”

Van der Wiel chose to examine climate change and mild weather rather than extreme events such as floods, wildfires and drought to make it easier for people to relate to the issue and inspire them to learn more.

“I am happy the research was picked up so widely; that way more people hopefully will learn that climate is changing the weather near them and in the coming decades,” she said, adding, “mild weather is not the only important thing in climate change, and therefore the other, more alarming, aspects of climate change should not be forgotten.”

“If there are projected changes in mild weather, that means there are changes in temperature, precipitation and/or humidity,” she said, noting that although weather could create more opportunities for things such as outdoor recreation, it could also have negative consequences like changing snowmelt patterns and threatening water resources.

Mild weather at the wrong time and place can be disastrous. The wildfire that devastated Fort McMurray last year reached city limits on a mild weather day, with an average temperature of 22.1 C and no precipitation, after several weeks of unseasonably warm and dry weather.

“Mild weather is not good for everything,” Van der Wiel wrote. “If you like skiing, increasing mild weather is bad. We haven’t investigated the coincidence of with mild weather, but such a link might exist and would indicate again that climate change is something the global community should try to mitigate as much as possible.”

This research is an important piece of emerging narrative about the impacts of climate change, but we must consider it in the context of all the work on climate. Prior to her work on mild weather, Van der Wiel studied extreme precipitation and flooding in the U.S. She has since moved to a project investigating climatic conditions that could negatively affect agriculture, to determine if it’s possible to warn farmers and communities in advance of bad crop years.

Science is the most useful tool we have to adapt to climate change and avoid its worst outcomes. But it requires critical thinking and a big-picture perspective to ensure we consider all available evidence. With so many people scrolling through social media feeds for news rather than reading entire articles, facts and clarity can become elusive. It’s up to us all—media and consumers alike—to dig deeper for the full story.

Science Matters is a weekly column on issues related to science and the environment from David Suzuki, written with contributions from David Suzuki Foundation climate change and energy policy analyst Steve Kux. Learn more at davidsuzuki.org.