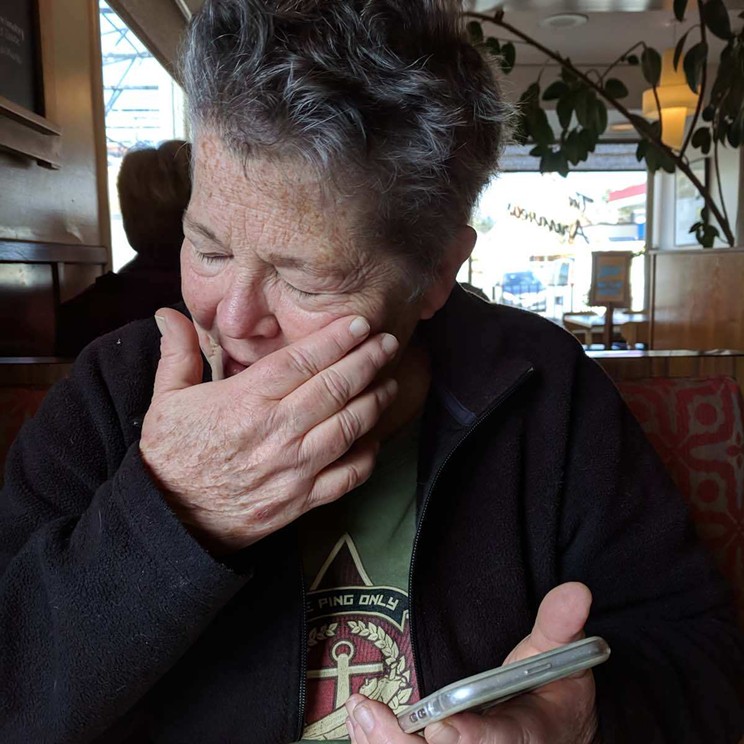 Parker Donham
“December 18 is so the wrong date for Jane Kansas to die. December is not even a month she liked,” writes her best friend, Lis van Berkel.

The beloved Halifax journalist died December 18. Now her best friend shares a tribute to help us all let her go.

Those are the first and almost the only words Jane will say at the Valley Hospice. It makes the nurse laugh, as she and three paramedics lift her into the air above the gurney and over to the hospital bed. That the nurse goes in for a hug next makes Jane smile, for just a second or two. Friday, 11:40am.

Some of the nurses at the Valley Hospice are huggy. Especially this particular nurse who hugs Jane, then Jane's sister, Sue, and then me. Big hugs that make us laugh, too. And pinch ourselves: Is this real? And are we here?

We are in the exact place where Jane has wanted to be since we sat in the parking lot this summer, looking at this large cottage building at the end of a secluded lane opposite Valley Regional Hospital. After a few hair-raising close calls—flipping her Kia Rio in an accident she couldn't remember, falling into hypoglycemic shock—we had moved her closer to where I live in the Valley. But, in Jane-words, it took a donkey's age to arrive in this perfect room, where people come to die. In fact, there's someone “actively dying” in the room next door, Sue and I are told. Jane is mostly sedated, but loud. Until she is comfortable, and quiet, her door should remain shut.

“Heron” is at the end of a corridor of 10 private rooms, all named after a different bird. There's a small couch and recliner, but Sue and I prefer sitting in two small plastic caster chairs on opposite sides of the bed. A lamp, and two windows, including glass doors that open out onto a small woods. The patio is as a friend recently described it to Jane and me. I describe it to her now and she rolls her eyes wide in disbelief. I'm sure she feels ripped off: It's too late for her to ever experience it.

In October, when her family doctor first prescribed hydromorphone for pain, Jane was taking just one or two a day. We don't know if she's moved to taking too much or been forgetting to take it at all, even when she's in pain. We know that she's stopped taking everything else because the pharmacy's blister pill packs, which she's come to hate, are randomly popped.

And even though the emergency room doctor who made hospice happen today knows that Jane is palliative, she wouldn't give her anything more. Palliative drugs need to be titrated, added slowly into Jane's system, not in an acute care environment, but in a place like this.

In addition to a consistent dose of morphine, the hospice doctor prescribes Jane an anti-psychotic called Nozinon. It helps a bit. She still grimaces. Then at 18:00 he adds a “big guns” end-of-life drug, Midazolam. It will induce sleepiness and decrease her anxiety. Sue and I like its pronunciation—“dazzle”—and it works. After two doses an hour apart, Jane is quiet. Every eight hours after that, and she remains quiet.

If I could ask her, Jane would say the pain is in her feet and legs—last week, it was a feeling like an arrow shooting out of her toe that had her writhing in pain. And in her hips—she fell getting out of the shower three weeks ago and hurt her right hip, and after laying in one position at the emergency department for 36 hours, there's the red start of a pressure sore on her left hip. And in her abdomen, where the edema has transformed her body into an extreme pear-shape. The only pants that sort of fit are the pyjama ones we've been buying at Joe Fresh all fall, but regular bouts of diarrhea made even these impractical as of a couple of weeks ago.

The Notes app on my phone is filled with short grocery lists from Jane that I haven't wanted to delete: Cough syrup - only cherry, Chocolates, Dish soap, Grapefruit juice, Blend, Depend

And texts that don't make much sense:

The commissionaire in the seniors' residence where she lives is perturbed by Jane and her need to be picked up off the floor or the shower seat, by the EHS paramedics who became regular visitors to her apartment. “This isn't that kind of place,” he told me early on. And a woman who wears pyjama pants to the dining room is not, Jane discovered, a worthy table companion. But she toughed it out.

Jane almost always refused to go to hospital when she fell. She had a lot against hospitals, even though they had saved her life. It's why she refused dialysis.

On Monday and Thursday afternoons, I visited Jane and brought her the things on her lists. We had beautiful conversations. She wanted to hear what I'd been writing, I wanted her to tell me about things she loved. She often asked the most insightful questions and pushed me to look at my work from another angle. If her day was hard, I laid next to her and stroked her hair. When her nerves became hypersensitive, I sat in a chair and put my feet on the bed. We could talk about almost anything or anyone.

I helped her into the shower. I cut her hair. I cleaned up her shit and she told me I was lucky she let me, which made me laugh very hard. I never knew if she was going to loan me $100 or be mad because I was 20 minutes late. I lied to her if I thought she might pick a fight. Sometimes she yelled at me, sometimes I yelled at her.

By the end, the VON was coming in to help Jane three times a day (although usually she refused their help, too). She wasn't eating anymore, except a spoonful of unsweetened applesauce to swallow her pills, and barely got up. Sometimes she was sick. I got her to sit up when she asked me to shave off her hair—it was very thin and had turned light, a little red like when she was child, Sue said. I buzzed it while she was on the commode, and quickly changed her sheets so she could fall back in bed. She barely peed anymore. She stopped answering FaceTime, and her phone. I don't think she even heard it.

Two weeks ago, Jane had been assessed by a hospice intake team, the usual way into hospice, but she was refused—though she could barely walk, even with a walker, and though her eyesight had deteriorated. Her glasses were now mostly useless, but she put them on her face and sat on the edge of her bed, like a professional, like Jane. She rallied and presented a self who was better than she actually was—even talked about how she liked to cook, Sue said—as too well for hospice.

When Jane was in a coma at the QE2 in 2020, I read one of her favourite children's books to her to bring her back to life, one she'd mentioned in her will. “Next time, read me this one,” she said recently, pointing to Indian Captive by Lois Lenski, on her bedside table. It's the true-life story of a 12-year-old white girl in the 1750s who is taken by the Seneca people as repayment for the loss of their son. I make it as far as page 100 here in hospice. Each juncture feels like I am reading Jane into her conclusion, into a better life.

Jane lived almost four months less than she had recently decided she would. Her kidney function numbers were an 8—anything below 15 means your kidneys are failing. When her doctor had said she had weeks or months, not years, she laid down and called out to me in the next room, “OK, April 15.” I had thought she was just watching TikToks on her iPad in the fort she had taken to making of her duvet. “Or June 15. Maybe I could make it to June 15.”

December 18 is so the wrong date for Jane Kansas to die. December is not even a month she liked, not since she gave up Christmas 10 years ago or more, maybe after her mother died. Prior to her heart attack, she had found some way to get to LA or Costa Rica or Tampa in winter. Even two weeks ago, Sue overheard her in bed quizzing someone at Norwegian Cruise Lines about their cabin fares.

By Sunday morning, I have turned my chair around so that I face the woods. I joke that I am driving and Jane is in the passenger seat. She can still raise her eyebrows but these gestures are just reflexes, they say. I haven't seen her eyes for two days. Maybe she compliments me again on my ability to drive in the dark.

Maybe this particular trip began when I was a shy 25-year-old smitten with her gift for language and she was 38 and started co-hosting The Word Is Out on CKDU. Her word choices were pristine. Her fascination with simple, small things could expand time.

Or maybe Jane set out 24 years after our break-up, with her heart attack during COVID, when I found myself the designated visitor in her 100-plus day recovery in the QE2. And maybe I could just think of her death this way, like a trip she's gone on.