After we knock down this third wave of COVID, the new Splashifax water park awaits.

“We are tied with one other for the largest floating unicorn in the world,” Wolpin clarifies in a phone interview with The Coast. (That one’s based in the Philippines.)

Wolpin is the founder of several businesses including Driver Dave’s, the company that’s shuttled tens of thousands of Haligonians to and from the airport since he started behind the wheel in 2008. Although Driver Dave’s business has paralleled the pandemic-related decline in air travel at Stanfield International, Splashifax wasn’t dreamed up on the spur of the moment in hopes of replacing lost revenue. Wolpin traces the beginning back to 2018, when his friend Jon Rasenberg—another entrepreneur, whose resume includes building and running a trampoline park—“started exploring the possibilities'' of opening an inflatable waterpark on the east coast.

Early in 2020, Rasenberg made his pitch: Let’s do this together in Halifax. Wolpin agreed. “‘Why not?’” he told Rasenberg. “‘But we need a really crazy feature attraction.’ And it's that statement that gave birth to our giant unicorn.”

“I have heard from many pensioners that they are stoked.”

The partners secured permission from the Sackville Arena to set up shop on the lake; designed the park; and commissioned all the equipment, including that giant unicorn, from an overseas manufacturer of large-scale water toys. They sent the deposit payment just as COVID-19 arrived. “Literally the same day the first case was announced in Canada,” Wolpin says. “We thought, ‘ah, let's ride it out.’ So the waterpark was manufactured. It was finished in late April 2020. And it has sat in a shipping container ever since.”

Now the container is on the way to Nova Scotia—the ship carrying it went through the Suez Canal without incident on Monday—and Rasenberg and Wolpin are getting ready to make Splashifax a reality. They need to hire more than 20 people, from lifeguards and general park staff to a marketing manager (hint: this place could really blow up on Instagram and TikTok), and the federal government’s Canada Summer Jobs program has already committed support. 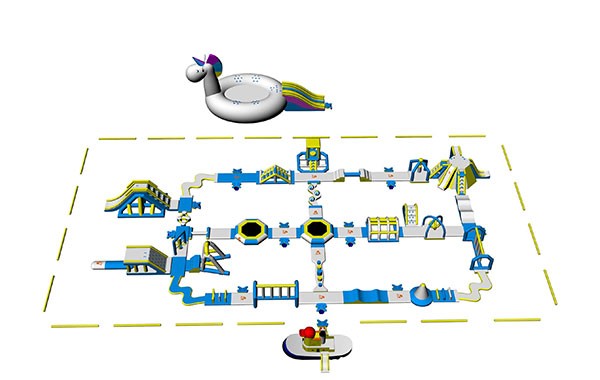 The state of COVID regulations will determine how the park operates. While they want to offer day passes for unrestrained hanging out, Rasenberg and Wolpin understand the rules may only allow small groups for limited times. “Even if we have reduced capacity, that’s fine,” Wolpin says. At this point, any public health rules looser than the province-wide one-household lockdown will feel like freedom.

The mid-June opening is aiming to coincide with the provincial vaccine rollout reaching people in the 16-to-19 age cohort. But the water park is intended to be safe, chill fun—life jackets will be provided, alcohol won't—for ages six and up.

“I'm 32, and my friends in my age group are absolutely ecstatic for this, and my 70-plus-year-old father is definitely gonna have fun,” says Wolpin. “I have heard from many pensioners that they are stoked.”