There's a reason they call it Sappy Fest 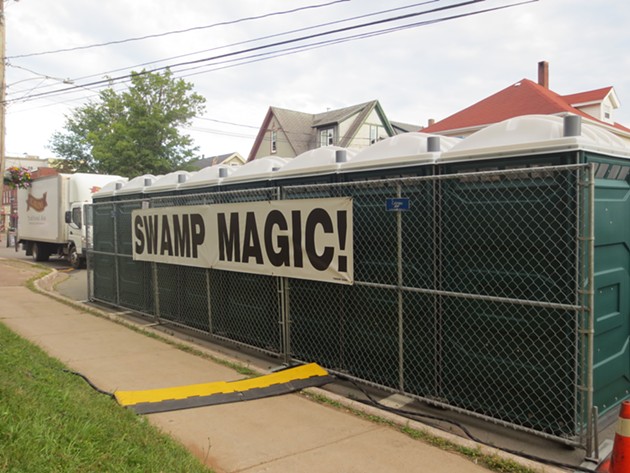 More than any other year, Sappy Fest 10 in Sackville, NB was one of the best weekends of my life. The moments swirl in my mind like a snow globe of the best people and musicians I’ve ever met. As always, the lineup featured some of the most diverse and dynamic artists in music, and as usual, the festival created a context for the life-affirming nature of artistic creation. There is meaning in Sackville.


For the most part, the creative direction under Lucas Hicks captured the festival’s spirit, but there were times when the programming was confusing. Super-hyped electronic acts opened for intimate folk headliners. The heaviest bands played daytimes and there were bluegrass jams at midnight. Like? Some acts were headliners but got shitty slots in small venues. Things like that. Basically, the schedule didn’t really flow; there were stops and starts and it lacked continuity and progression. Plus, PUP’s singer made a gross masturbation joke and Solids can go back to Warped Tour or whatever the fuck. Those things aside, everything else rocked so much. Here are a few highlights of the sweetest weekend of the year.

I arrived on Friday evening ready to party. I set up my tent at Jon McKiel’s Family Campground and hit the York Street main stage. Off the jump, there were serious sound issues; a volume surge violently and repeatedly interrupted Michael Feuerstack and Jennifer Castle. But thankfully the beer still worked. At 1:00am, I hit the Legion for Montreal/France’s Moss Lime, with Halifax’s Nathan Doucet on drums, and it was so sick and kooky and impressive. Just listen to this song to see what I mean.

Moss Lime
Hordes of hooligans walked to the old Enterprise Foundry at the end of Lorne Street for off-schedule shows that were almost more fun than the main stage (sorry?). The burning diesel from the generator, lo-fi mood-rock and ethereal vocals filled the air with Toronto’s Dorthea Paas, featuring our homeboy Graeme Stewart (ex-Monomyth). This warmed us up for Victoria’s Freak Heat Waves, five towering figures playing anti-capitalist panic-inducing, frantic drone-rock. One of the best Canadian bands of this century. Then Moon serenaded us under the blue moon with 8-bit lullabies. Don’t take rock for granite. 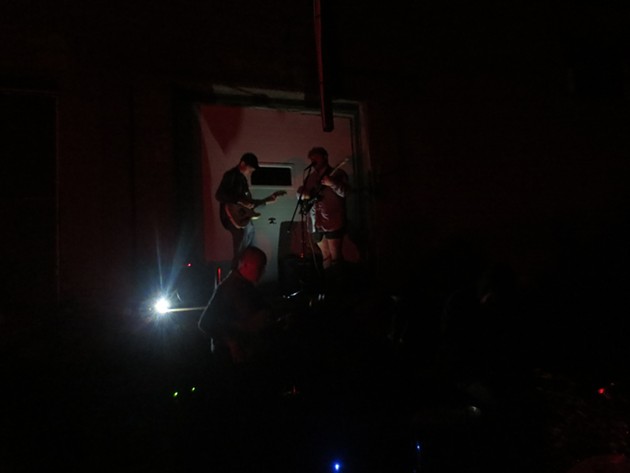 Moon by the light of a light 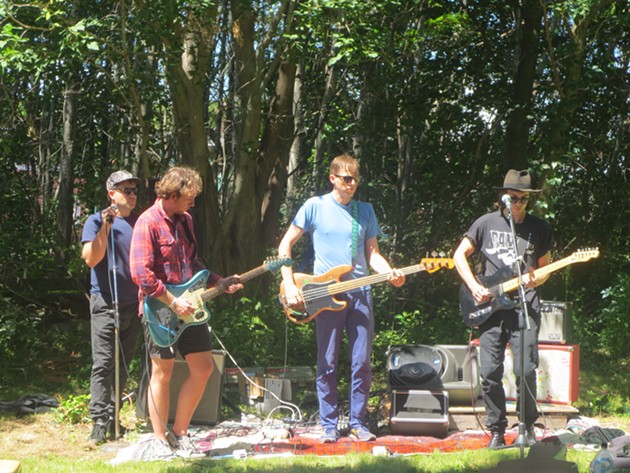 Museum Pieces
The next morning, McKiel hosted Museum Pieces (Tyler Messick) for a backyard show with Matt McQuaid (Holy Fuck), Ryan Allen and Virgil Muir. No drums, lots of hums, country and western revival and the best way to start the day. A few of us played whacky basketball close enough to hear Winnipeg’s hot new band Human Music, who are sweet as prairie apple pie. We hosed the sweat off to check out Halifax psych-rockers Walrus. They delivered a solid set but their energy seemed a bit depleted from partying hard the night before. It was a very hot day, but they were freaky and fun.

Walrus' Justin Murphy
I floated the streets and hung out at Tent City where my friends were camping and drank whatever. I ate some noodles. Then I turned myself up for Mozart’s Sister, the electronic project of Montreal’s Caila Thompson-Hannant and it was truly divine. Her vocal range is hypnotizing; her sample creativity and sense of composition made me feel super emo, and we danced really hard. The crowd was dying for an encore and she gave us one. Few bands received that reaction.

She was followed by DIANA and Angel Olsen, whose soft lilt struggled to be heard over hundreds of loud drunk people. Saturday’s main stage lineup was anti-climactic, so we went over to Struts Gallery to see Mitchell Wiebe’s new-wave/no-wave parody performance with artist Graeme Patterson and Ryan Allen. The gallery filled with smoke machines, beads and disco balls, which we smashed. 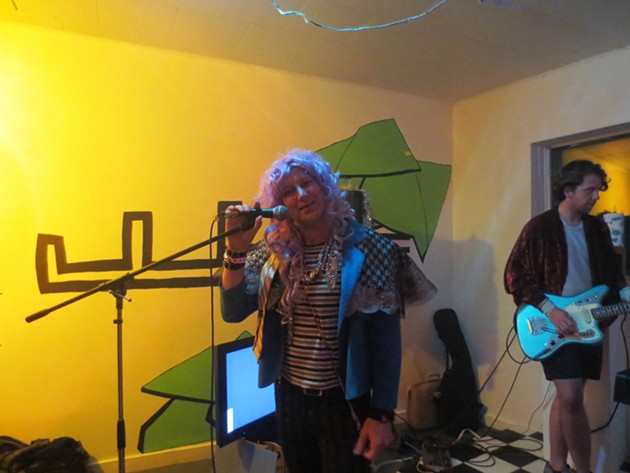 Mitchell Wiebe
Over at the Legion, Toronto’s New Fries continued to push the boring confines of rock and roll with singular force. That is, they are so tight, commanding, weird and interesting, compact and expansive. 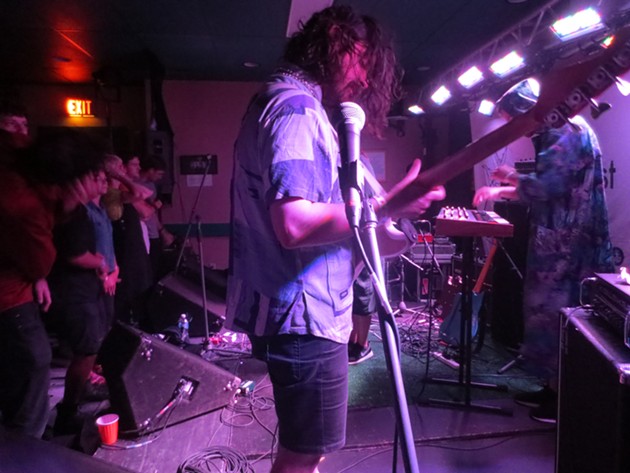 New Fries
The Foundry was once again bombarded by people who never sleep. Sleep when you’re dead. Old & Weird played a spooky set with songs from What I Saw, a challenging record that’s probably more challenging to play in the dark. Crousetown’s Joyfultalk got spookier with samples from Crocker’s custom-made sound machines and hypnotic rain-forest plunks and echoes. And then Parliament ripped our souls apart. The project of Jody Zinner and Steven Wiseman turned into an evil dance party. Swinging a flood light over her head, Zinner’s manipulated vocals sounded like Satan over Wiseman’s minimalist techno. It was as dark and dizzying as the black night. The creepiest sets of Sappy for sure.

Joyfultalk
Sunday afternoon, I wandered back into town to eat more noodles and drink water, and then I helped Brad Loughead (Each Other) carry his gear because he’s the best. Then we watched CROSSS. I’ve loved this band since day one but hadn’t seen the new members and synths. Andy March’s solos have escalated to a technical level. He’s high magic. Scarlett Rose’s basslines moved through her mystically and Kris Bowering created craters in his snare drum. Hard, slow, fast and heavy. CROSSS seeps into your brain like black acid. Again, this set would have been better at night, but the daylight made the environment disorienting, which was unintentionally cool. Later that night, Andy said, “Just use your mind, Adria.” Is Andy a Jedi? Is Andy a priest in the temple of Syrinx? Can’t wait for the new album. 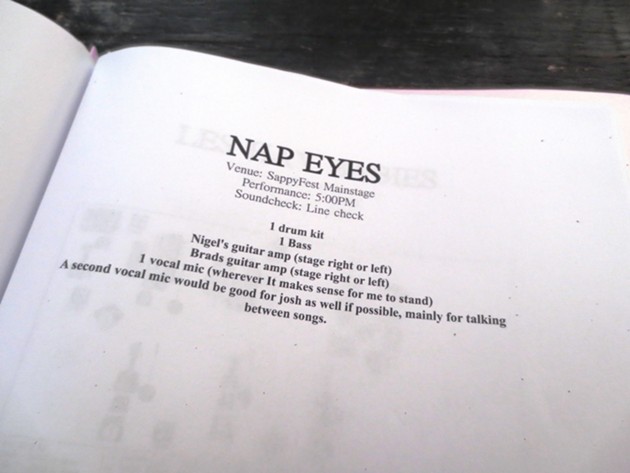 Nap Eyes' rider, which is the cutest thing I've seen


The most recent signees to You’ve Changed Records and Paradise of Bachelors played the sweetest set I’ve seen at Sappy in over five years. Nap Eyes is your new favourite band. They played from recently reissued Whine of the Mystic, and my favourite song, “Your Samples Our Obsession,” which is one of Josh Salter’s grooviest basslines. It makes me feel really good. Constantines’ Bry Webb was seen rocking out and Steve Lambke (You’ve Changed Records) watched adoringly from side-stage. Andrew Neville cried. I also got emotional. Singer/songwriter Nigel Chapman is one tremendously special human being. Soft-spoken, he transforms into an oracle of the human condition onstage. “Life is very haaaaard,” he sang (“No Fear of Hellfire”), so simple and true. Some people make more sense of life than others: Chapman is one of those people. We should always listen when someone of few words says something because it’s usually important. “This is fun,” he said. Plus, Brad Loughead’s guitar licks are so good they actually hurt. With Seamus Dalton on drums, Nap Eyes are some of the most talented individuals on this earth. I feel really very lucky to know them.

Then I got to meet Brad’s parents, who travel to his shows near and far. We had supper at the Legion and they told me how proud they are and I felt really proud, too. Lucky for you, Nap Eyes is playing with Human Music and The Everywheres tonight at Menz Bar! Hope to see you there. 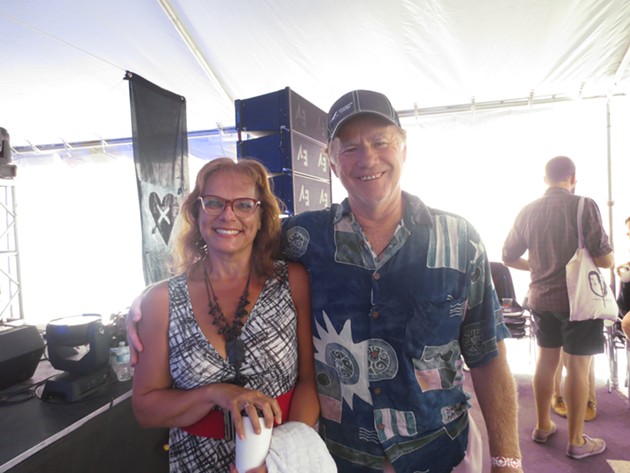 Things got quiet as the Vogue Theatre filled up in the evening and I found Old & Weird (minus Cheryl Hann) and Nigel running around the parking lot. And I mean, look how cute they are. 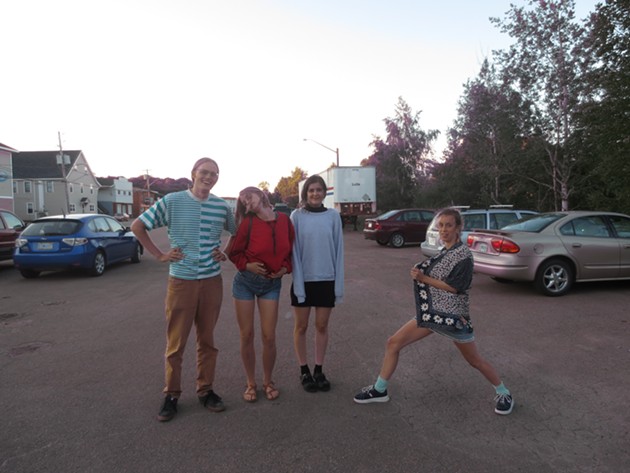 Old & Weird and Nigel Chapman
After dark, we went to the main stage for Montreal’s Doldrums, the electronic-loop project of Airick Woodhead with a live drummer and producer/synth-keyboardist. Again, this should have been later in the night, as the audience was going insane with extreme crowd-surfing. In one word, this set was “turnt.” 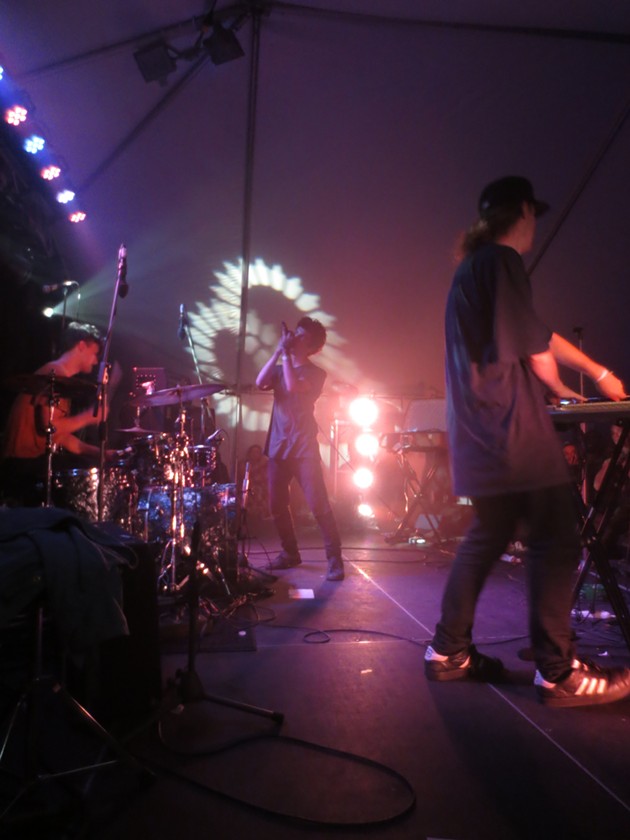 
I wandered off to hang out with sweet friends in a tent and we talked about how Radiohead sucks as the years go by. No one compares to Fetty Wap. “Thom Yorke is the British Fetty Wap,” said Ryan Allen. I emerged again specifically for Jon McKiel’s late-night set at the Legion, and I think it broke my brain.


Jon McKiel is way too underrated. He started his career as a solo dude and incorporated band members and instruments as needed, with variation over the last decade. But at this point, you can forget everything you know about Jon McKiel. This man should have been headlining, he has hit new heights. Between the strobe lights, the insane speed of Aaron Mangle’s drumming, the range of Jay Crocker’s solos and the organic but furious directions of each song, I think I had a stroke. “I need an ambulance,” I screamed. Jon played “Tropical Depression” and the crescendo was a hurricane of emotion. The whole room screamed, “Cause I’m dying all the time,” BECAUSE WE ARE. Jon hid his smile. It was a powerful moment: recognition that life is short, love is real, friendship is the most important thing and music connects us in weird intangible ways. Music makes life worth living.

Then Brad DJ’d at Klarka Weinwurm’s (thank you Klarky!) and he and Neville played non-stop bangers until sunrise. I can’t get over the extreme elation I felt all weekend. I fell in love a thousand times, enamoured by all the bands I saw, the wildflowers in the baseball field, the Filipino noodle guy, cute little kids, all the hugs, Jody Zinner’s puppy, the generosity, kindness and compassion of everyone. There’s a reason they call it Sappy Fest. You can find happiness at least three days a year.

Speaking of Sappyfest , The Scene