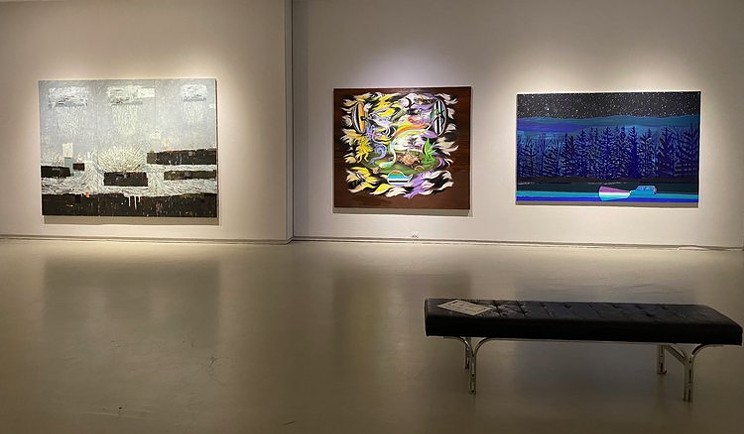 A partial look at the SMUAG show JIM, which features paintings by three lauded local artists.

When a trio of famous rock musicians combine forces, we call it a supergroup. But what about when three big-deal visual artists combine their catalogues and creative energy? Well, we don't really have a pop culture term for that—at least not yet. But, you can still see it in action by catching the show JIM at Saint Mary's University Art Gallery, which just announced it is being extended until December 11.

The Saint Mary’s University Art Gallery is not closing: Despite rumours in the visual arts community, SMU says its gallery is staying open.

The show features paintings by Jack Bishop (known for his landscapes of highways, byways and strip malls that are a modern answer to The Group of Seven's call), Ivan Murphy (whose canvases are a cacophony of textures so coveted, the Nova Scotia Art Bank has laid claim to a few) and Mitchell Wiebes (a multi-disciplinary artist who creates paintings  beloved by critics that sometimes call the Fauvist movement to mind). While all are very different in subject matter and approach, viewing them together is a three-course feast in some of the most exciting canvases being created locally. As the gallery puts it in a release, "These three artists are obviously individuals. They have distinct styles, but clearly possess one essential sameness: they are painters that love the physicality of paint."

The triumphant return of the Saint Mary’s University Art Gallery: Rumours of the SMUAG closing are squashed for good as it mounts an exhibit by Sobey Award shortlister Lou Sheppard.

The Saint Mary's University Art Gallery is open Tuesday to Sunday, 11am-5pm and closed on Mondays. It can be found on the first floor of the Loyola Academic Complex on the SMU Campus.