Sage against the machine

Savvy Simon is leading a revolution—online and off—to save the Mi'kmaq language. 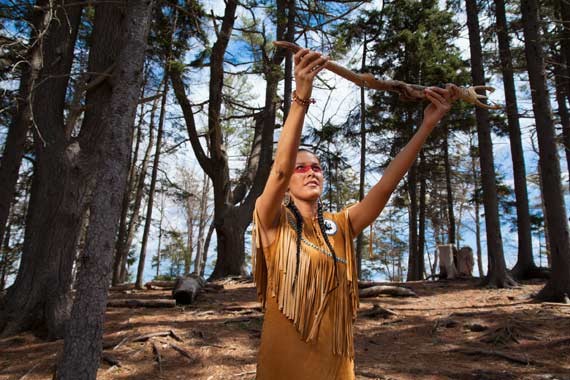 Sitting in a bustling cafe on Gottingen Street, Savannah "Savvy" Simon is impossible to miss. Her long braids hang over her shoulders, nearly to her waist, and her moccasin-clad feet are tucked beneath her long buffalo-and-rainbow-patterned skirt. Beneath her white blazer, her tank top bears the words "L'nuis'i! It's that easy!"

With a smile that's pure sunshine and a laugh that can be heard from the street, she's a delightful and colourful presence. At only 28, Simon has an impressive laundry list of accomplishments. She was named as one of Canadian Living's top 40 female change-makers, danced in the opening ceremonies of the Vancouver Olympics and acted as a prayer warrior at Elsipogtog during the 2013 blockades to prevent shale gas explorations. She's a college graduate and small-business owner who has prayed on a beach with Pope Francis. She's spearheaded sobriety initiatives for Aboriginal youth. Though Simon is based in Halifax, she's travelled the world to spread messages of love and peace.

If her name sounds familiar, though, you might recognize Simon as the founder of the #SpeakMikmaq campaign that's been exploding into the social media feeds of Canadians. Simon has undertaken the enormous task of advocating for and engaging indigenous youth in ways that are relatable and accessible.

"Our language is very precious. It carries our past and it's full of history and humour. Our language is dying, many youth are not growing up speaking our language," she says. "What we need is a Mi'kmaq language revolution. This revolution needs us to encourage our youth to speak our language, even if it's tidbits and sayings to start."

A native of the Elsipogtog First Nation, Simon grew up in a Mi'kmaq-speaking, single-parent home, educated in the language by her mother and grandmother. However, the history of the Mi'kmaq language in the Simon family is not an entirely linear one. Simon's grandmother (Migiju) Sarah Simon is a survivor of the Shubenacadie Indian Residential School in Shubenacadie. In a story that's all too common among residential school survivors, she was stripped of her language through tactics of shame, intimidation and violence that took place over six years. Sarah did not re-learn her language until she was a young adult, studying her mother tongue under the tutelage of her new husband.

"It was hate that took her language away, but love that brought it back," Simon says, beaming.

It's a piece of family history she's recounted many times, but it's evident that she doesn't tire of telling it. A long life of healing later and nearing 90, Sarah Simon is now part of a new and unexpected movement to keep the Mi'kmaq language thriving. She's making cameos in her granddaughter's YouTube series and on her Twitter feed.

Reconciling traditional ways of life with constantly changing technology is a concept as old as time, but the means of integration have become more and more creative.

Simon's efforts are simple, direct and, well, savvy. #SpeakMikmaq is tacked onto YouTube, Facebook, Instagram, Vine and Twitter posts where Simon shares a simple word or phrase in Mi'kmaq. A desire to learn preceded Simon's dream of helping others. "As a young woman, I am big on social media," she explains. "I love Twitter, I love Instagram, all that sort of stuff and so sometimes there would be words that I wish I knew. I wish that there was a hashtag for speaking Mi'kmaq. So I was like, I'll start it off. I'll create it. It's been a year and a half now."

With a following of roughly 16,000 people over five platforms, Simon's reach is enormous and it's easy to see why. The charm of the few-seconds-long video lessons come from Simon's larger-than-life personality—she radiates joy and makes a point of celebrating a positive and grateful lifestyle. Her charismatic and unabashedly spunky personality makes it easy to understand how she brings such an enormous rotating cast of characters into play. Whether she's convinced her brother into climbing through the window onto her grandmother's table to contextualize a scolding phrase, enlisted the help of a youth to sing the Backstreet Boys' "I Want it That Way (ki'l n'puktewm)" or is reciting silly "pow-wow pick-up lines" with a wink and a nod, Simon involves anyone who happens to be in her company—including her grandmother. The elder Simon, Sarah, is more than just a good sport—she steals the scene, sing-songing her way through the videos and Savvy's catchphrase "L'nuisi! It's that easy!" Simon teaches the language from wherever she happens to be—the supermarket, in the car, at church, in Brazil, in Hawaii, in Mexico, in Barbados.

Filmed using a smartphone, the instructionals are inexpensive to make and free to use, and their involvement of children, elders and non-indigenous people reinforces the unfortunately still radical notion of language accessibility for everyone. This lighthearted approach to culture and language that's catapulted her to social media stardom has begun to take her offline and to schools, reservations, conferences and pow-wows across North America. Simon's even expanded her casual curriculum of language instruction into workshops and motivational speeches about sobriety and healthy relationships.

The online campaign has also united Simon with entire communities of other indigenous language teachers and enthusiasts who have counselled and mentored her. With a few keystrokes she found herself in Indian Island, Maine, shadowing Penobscot and Passamaquoddy activists and in the Northwest Territories, working with Slavey and Chipewyan language teachers. Inspired by her work, #SpeakMaliseet, #SpeakPenobscot, #SpeakLakota and #SpeakCree campaigns have begun to take off.

It's important to note that these hashtag campaigns bear more weight than, say, #ManCrushMonday. The sharing of cultural capital online is a crucial tool of fellowship for indigenous youth. As Simon explains, youth outside of urban centres are prone to feeling isolated from their peers, while urban youth feel as though they're "losing out on culture and they're losing out on experiences" if they've never been or no longer are residents in primarily native communities.The exchange of language and experiences on social media is absolutely a factor in easing those feelings of disjunction in an immediate and organized way.

Word of Mouth
Want to #SpeakMikmaq? Get started with these phrases.

The idea of practicing one's culture anywhere is central to Simon's life. After dark, she practices her fancy shawl dancing in vacant studios at a GoodLife gym, listening to her Mi'kmaq songs on her iPhone.

Even Simon's wardrobe is an eclectic mix of traditional and contemporary, mixing moccasins, handmade skirts and beadwork jewellery with blazers and bright lipstick. Her manicures occasionally bear dreamcatchers and feathers. It's also a look you can emulate—she makes, wears and sells lines of clothing emblazoned with Mi'kmaq words, symbols and catchy quotes. The lines of casual pieces and activewear encourage indigenous people to embrace and communicate pride in their culture whether they're at work, at a pow-wow or just at the gym.

It's a brilliant business venture, but it's also an inventive way to reach youth. Giving young indigenous people the option to literally wear their native pride on their sleeves (or legs) with a pair of leggings or a hoodie is an ingenious way to promote camaraderie. It's subtle, but it works—the majority of #SpeakMikmaq Instagram posts from users other than Simon feature at least one of her designs.

Not everyone is a fan of Simon and her efforts, though. As is universal among people with large audiences, she has been the target of online harassment, but from unexpected sources. In what she calls an example of lateral violence (see sidebar, p10), Simon has been attacked online and made the subject of hurtful memes and video parodies made by speakers of other Mi'kmaq dialects—community members from Nova Scotia, Quebec and even other parts of New Brunswick.

Simon has made a commitment not to engage with her bullies online or otherwise, upholding her personal philosophy of "positive vibes only." When negativity creeps into her comment sections or into conversation, she ignores it. Simon's feathers remain largely unruffled in the face of criticism, but in a video manifesto titled Keeping Our Talk, she donned warpaint and regalia to finally put her critics on blast. The video was released following a string of incidents where leaders of a Cape Breton Mi'kmaq community bullied and snubbed her at pow wows and online for speaking with the dialect of her region.

These are harsh accusations and anyone else might have dropped the mic, but Simon doesn't let up. She goes on to say, "shame on you, but you will not take my talk. Mi'kmaq I am, and Mi'kmaq I'll die...in the Indian residential school system it was easy to pick out the oppressors, they wore white collars and habits. Now the oppressors are men and women in our communities."

While she doesn't face physical violence for speaking Mi'kmaq as her grandmother (and so many others) did, the pervasive tactics of shame and intimidation remain. Despite the vitriol that comes her way, her biggest concern is that criticism from other community members will prevent other people from taking the initiative to learn their native languages.

Instead of being discouraged, Simon considered the incident that lead to Keeping Our Talk to be a teachable moment, and released a video explaining dialectical variations.

Simon considers the biggest problem facing native youth today to be the multi-generational process of healing from residential schools and the '60s scoop. She believes that this generation of young native people are the ones who can stop the cycle of violence and addictions that these monstrous acts entrenched in the elders of Canada's native communities. Her fondness and respect for indigenous youth is apparent as she calls them the "generation of love" before adding that "love is what's going to heal us."

As committed as she is to helping her mother and grandmother heal, she's spent her own life rehabilitating from the after affects of these atrocities that made her formative years especially tumultuous. Though Simon's been sober her entire life (an accomplishment she takes great pride in) she's battled other demons—toxic relationships, depression, yearning for the father she never had a chance to know. Fortunately, her own hardships have made way for a profound vision to empower Mi'kmaq youth to immerse in their culture to be their best selves.

Savvy Simon isn't just healing, she's a healer. And she's on a mission.

By Uytae Lee
In this companion video to the "Sage against the machine" feature story, Savannah "Savvy" Simon talks about the Mi'kmaq language revolution.