Only 18 months after being hit by a truck and dragged 66 metres, Lauren Goodyear had made it her goal to run the Bluenose half-marathon. 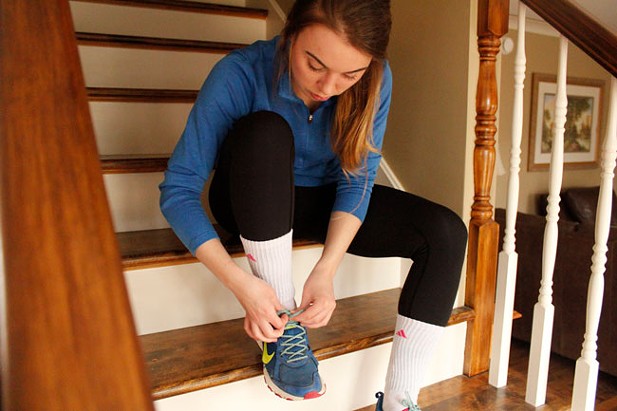 JESSICA BRIAND
Lauren Goodyear laces up her shoes for a run.

Lauren Goodyear left her house that night, back in 2016, for her usual run.

When the 21-year-old came to the intersection of Dartmouth Road and the Bedford Highway, she looked both ways, turned off her music, checked the street again and started to cross.

All she saw were headlights. The truck hit her, dragging her 66 feet.

“I remember just looking—as I was being dragged—looking and seeing someone sitting in the other lane in their car just staring at me, mouth wide open,” Goodyear says.

Eighteen months later, Goodyear will stand at the starting line of the Bluenose half-marathon this May to prove to herself that the traumatizing event can’t take away her love for running.

“I didn’t want my accident to change anything when it came to running,” she says.

It took Goodyear a month after her accident to be able to stand and start walking. Before that, she was relying heavily on the help of family, friends and a nurse to shuffle around the main level of her Bedford home. Her injuries included second-degree burns, multiple stitches, the loss of her front teeth, a concussion, a bruised tailbone, muscular injuries and post-traumatic stress.

Surprisingly, the truck hadn’t run her over, says Goodyear, referring to herself as “a little speed bump.” After the pickup stopped, passersby lifted the front wheel off her tailbone and pulled her out by her armpits.

She’s been slowly regaining her movement ever since. When she began to walk again, Goodyear started going to physiotherapy and occupational therapy three times a week. A few months later, with a clear concussion test, Goodyear wanted to try running again.

“It was really a big accomplishment to be back and just do a lap of the track, but at the same time it was very stressful,” she says. “I can remember times I’d be going for a run and I’d be crying really quickly during it. But I’d just wipe the tears away and keep  going.”

Running has been a huge part of Goodyear’s identity ever since she ran her first five-kilometre race at the age of four. But physical injuries weren’t the only thing standing in the way of her getting back to running. Her body was so focused on recovery that her mind didn’t do the same, leading to a diagnosis of delayed onset post-traumatic stress disorder.

At times it was hard for her to keep going.

“There would be weeks where I’d have three physio appointments; I’d have an OT appointment; I’d go to see the plastic surgeon, a psychology appointment and my day was packed,” she says. “I remember sitting in the VG waiting for my plastic surgery appointment, and I was so overwhelmed. I just wanted to cry.”

Sometimes she’d be running and it was like she was completely back to normal, Goodyear says—nothing had really changed. Other times she found herself tensing, in case a car went off the road and hit her again. She likens it to a rollercoaster—one kilometre she’d be on top of the world, and the next would be a sudden rush of nerves.

“I wasn’t as fast or as fit as I was before, but it was empowering. It was great. I was proud of myself that I was able to keep going regardless of what happened to me.”

In order to push herself to run again, she made a goal, and she made it a big one: The Bluenose half-marathon.

“For me when I do the Bluenose, it’s going to be more than just doing a half marathon. It’s kind of like this very scary thing happened to me, but I’m able to keep going anyway.”

Goodyear is currently on a 17-week training plan in advance of the marathon’s May 18 starting pistol. She runs with friends and family members for support; changing her routes to avoid busy streets.

“One of the things my psychologist was saying about PTSD is avoiding makes it worse, so I was like, ‘Let’s just get right back into it,’” she says.

Goodyear wasn’t a religious person before the accident, but when the truck stopped she caught herself praying; asking for help to get through the next five minutes, the next month, the next year.

“It changed my life for sure, but I wouldn’t change it happening to me, as crazy as that sounds,” she says. “I feel like if I can watch my life happening again and know the accident is coming and stop it, I probably would just close my eyes and brace for impact again.”