The boys of Goon hit the ice again, with Jay Baruchel at the helm. 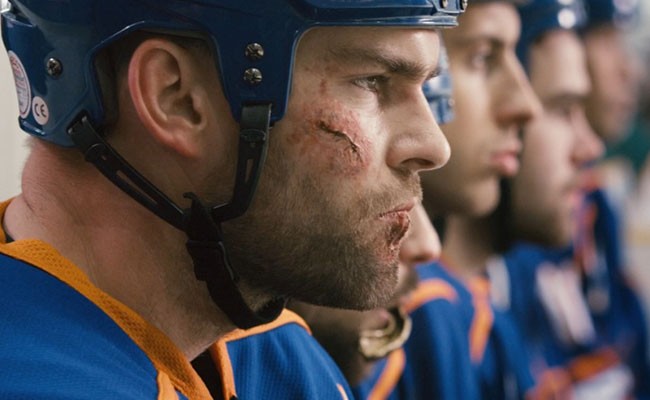 Seann William Scott is back as Doug Glatt in Goon: Last of the Enforcers.

The 2011 film Goon offered a new angle on hockey movies: Doug Glatt (Seann William Scott) was a formidable fighter—and a really nice guy. Charmingly dim and good-hearted, yet a terrifying opponent. Goon: Last of the Enforcers, out next week, catches up with Doug well into his career with the Halifax Highlanders (yep, this Halifax, though it was shot in the GTA). He's now married to Eva (Alison Pill), with a baby on the way, and has a new rival in Anders Cain (Wyatt Russell), who takes him out of commission and sets off all kinds of problems.

"The first one is 'boy meets girl and boy meets hockey.' So the answers to things are readily available, before the shine gets worn off," is how Jay Baruchel, who co-wrote and acted in both films and directs this one, describes it over the phone from Toronto. "And this is 'guy married to girl and guy married to hockey,' where it's a bit more of a grey area and the answers aren't as obvious as they used to be. And what does that look like? I thought that that was an important thing to show the world."

After writing the script with Jesse Chabot, Baruchel—who will attend a winners-only screening at The Oxford on March 9—stepped in to direct after original director Michael Dowse bowed out. "To use a hokey analogy, instead of signing a free agent we just brought me up from the farm team," he says.

He also employed a familiar name as his editor: "Oh buddy, Jason Eisener, holy fuck. He's my hero. He's the best," Baruchel enthuses. "I think he's an important an artist as this country has. I don't think people realize quite how talented he is. Jason took a year off his directing career to cut this movie. So I had one of Canada's great filmmakers in that process."

Last of the Enforcers is as gleefully foul-mouthed as the first, but contains a more sober heart and a conclusion that Baruchel happily describes as a "moral grey area" about hockey as a sport, and a lifestyle.

"It would be hypocritical of us as the people that made these movies to say that we're against fighting, but it would it would be disingenuous of us to prop it up without showing how the sausage is made to some degree," he says. "There was a moral imperative to show people what it looks like when the boys go back to the locker room, and when they go home."

Baruchel has had many successes in the States—he's part of the Apatow fraternity, starred in the FXX series Man Seeking Woman and is the voice of the How to Train Your Dragon franchise—but he disputes the idea that Canada is just a "parking lot" for your ambitions. (A Montrealer, he lives in Toronto.)

"I was raised with a real sense of patriotism and civic duty. So if I can create something that means something in my own country, that's a special thing," he says. "I said after the first Goon I could die a happy man because no matter what, we left this behind. There's a cultural tapestry that every generation of Canadians contributes to. And we're a baby country with a small population, so it's incredibly meaningful to me that Goon is already on that tapestry. It's rows down from Two Solitudes, but it's on there."