After four months of dishing up all-day breakfast, Robie Street Station works out the kinks. 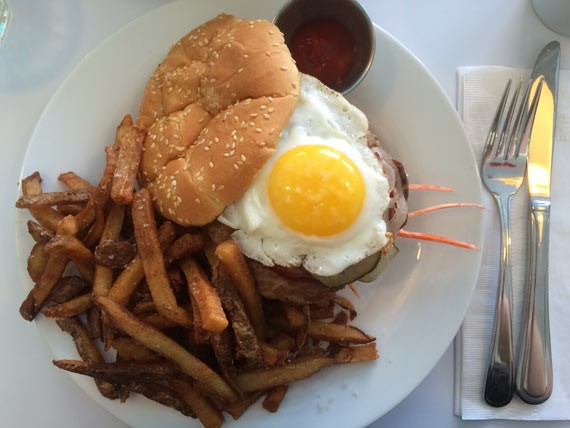 Robie Street’s plump bibimbap burger and its sweet slaw are a treat.

There's a reason I don't like to try a restaurant in the first few months it's open. It's the same reason I don't try to eat a fried egg two seconds after it's been dropped into a hot pan: it's not ready yet.

I had low expectations for Robie Street Station when I met Allison there last week. I made the mistake of going to the restaurant the first week it was open. There was an air of excitement back then, probably because the friendly ghost of that space's former resident, jane's on the common, divined the restaurant with goodwill and great memories. It was, admittedly, nice to ease back onto those solid wooden benches, the bright sunlight filtering through the tall windows.

Unfortunately, that first experience was a terrible one: confused, glassy-eyed service, botched orders, second-rate food. It's sometimes easier to shrug off a restaurant than it is a first impression, but I didn't. Instead I just waited, giving it some time and hoping that the kinks would work themselves out.

Four months later there are still kinks, but it's Muswell Hillbillies, not UK Jive, if you know what I mean. Things Are Getting Better. (Pause for a Citizen Kane slow clap from fans of The Kinks.)

After we're seated and order coffee, Allison gets her water glass filled. I don't—the server wanders off to another table. We are first given just a minute with the menu and when we ask for a few more are given an extra 10. A refill on our coffee isn't offered until we are almost done our meal. The service still feels scattered.

The food, however, is very good. The bibimbap burger ($12.50) makes a great first impression, the top of the toasted sesame seed bun glancing off the side of the fat burger, a beautifully fried egg perched on top, yolk ready to pop. The housemade patty is a plump, salty foil for a sweet slaw, tart pickled onion and cucumber and the pungent, fiery heat of Gochujang sauce. It's a very well-balanced burger, very approachable Korean-fusion. The French fries on the side are hand-cut, very crisp with huge flakes of sea salt.

A truly great banh mi hits every flavour and texture: The sandwich will have savoury, sweet, salty, sour, bitter, earthy and spicy notes in a soft, but crisp bun. The Station's banh mi ($9) baguette lacks the right crisp-and-fluffy texture; it's just a chewy bun. (The lack of pate is also a shame.) But while the combination of quick-pickled vegetables, jalapeno, cilantro and tender pork belly isn't incredibly exciting, it does taste good. It's the Lauren Conrad of sandwiches: nice, but not super memorable.

The real hook of this meal is the cilbir ($12). This Turkish-inspired comfort food is memorable. Thick Greek-style yogurt is spiked with garlic and dill, criss-crossed with colourful drizzles of bright green chimichurri and dripping orange Aleppo chili butter. Once you pop a yolk in one of the two beautiful soft poached eggs, the acidity and heat swirl into the fatty yolk and creamy yogurt, making for a perfect balance of flavours. I would probably enjoy a few slices of a thick, crusty sourdough more than the naan that's offered—the addition of a charred toasty flavour would put this over the top for me—but the flatbread is a thoughtful choice, appropriately scooping up the somewhat soupy mix. The French fries also work well here.

Four months ago I didn't expect to spend any more Saturday mornings on Robie Street. Now I have a new favourite brunch dish. As a certain band once sang, "no more looking back."

Write your own review of Robie Street Station here.