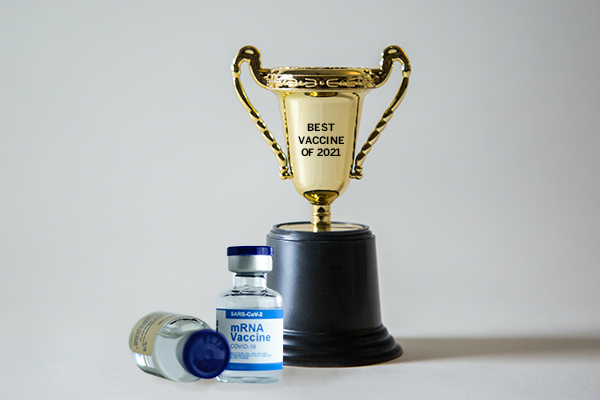 I t was all said in nearly the same thought.

On Tuesday, viewers from across the province tuned in to the daily COVID briefing to hear the province’s top doctor deliver the grim news that the pandemic that had already killed 67 Nova Scotians had unflinchingly claimed two more lives.

Barely missing a beat (and perhaps that was the problem), Nova Scotia’s chief medical officer of health, whose leadership around COVID-19 has largely been hailed as an exemplar to uphold across the country, uttered a sentence that will be living in my head rent-free until every Nova Scotian—and, for that matter, every Canadian—has received all doses of whichever vaccine they end up receiving.

“All our vaccines are good vaccines,” Strang said in response to a question over the recent controversy surrounding the National Advisory Committee on Immunization’s statement on mRNA vaccines’ alleged superior status.

“The mRNA vaccines are better.”

That word. Better. Better? But better for who, Strang?

What we (don’t) know about Nova Scotia’s two recent COVID deaths: Strang says many details are being kept quiet for privacy reasons, but those that have been released are concerning.

There are a few important points of context needed to bring this full quote to life, so spare me a moment while I break down why this seemingly off-the-cuff remark can—and maybe will—have lasting and even fatal consequences.

Canada’s vaccine rollout has had its problems. That’s been documented. But what’s also been documented is the efficacy of vaccines. And all the vaccines (AstraZeneca, Pfizer, Moderna and, soon, J&J) being jabbed into the arms of Nova Scotians are the same ones that have made it through the scrupulous process of getting approved by Health Canada.


Monday: Take the first vaccine you can!
Tuesday: Well, except for AZ, of course. Fuck that shit.
Wednesday: I mean, unless you're poor. Then, like, just do whatever, yeah?

We discussed last week here how irresponsible it is at the individual level to be cancelling appointments for the AstraZeneca vaccine, a move that could see pharmacies actually throwing away doses of a potentially life-saving solution. But it’s possibly more irresponsible when not just any public health official, but the public health official leading our province out of this darkest timeline, makes a comment that implies there is in fact a vaccine hierarchy. Not to mention, he has received the alleged gold standard.

Better inherently implies there’s a worse-off option. These relative terms of comparison do not and should not exist in our vocabulary when discussing vaccines that have been vetted to go into your arm and save your community from unnecessary death.

“We’re going to be throwing vaccines in the garbage and it could’ve been in somebody’s arm.”: People are spamming pharmacies’ non-existent waitlists for other vaccines while AstraZeneca shots expire.

This simply isn’t the time to be making comparisons between vaccines like they’re a brand-name shoe versus its knock-off cousin. We need vaccines in people’s arms, and the more people who kick that jab down the road, the harder and longer it will be 'til we contain this virus.

If you do find yourself in such a position to say you’re “shopping” between vaccines, you’re revealing a certain kind of privilege. It's not a pretty one.

You don’t even have to look too far within your own country, where people are quite literally lining up at dawn without guarantee that they’ll receive a dose of the life-saving formula, to imagine the look on their faces when they learn people are willfully delaying. Not to mention what folks peering across the ocean from countries where they have yet to receive a single jab would think.

Just last month, the chief of the World Health Organization discussed how some countries are well on their way to vaccinating the entire population, while others have given out zero shots. “The inequitable distribution of vaccines is not just a moral outrage, it’s also economically and epidemiologically self-defeating,” Tedros Adhanom Ghebreyesus, director-general of the WHO, said.

Today’s the day I get my second rate vaccine, offered to me along with other table scraps the boomers didn’t want. Shout out to Dr. Strang and NACI for making that clear.

While waiting for a different vaccine and not having access to one are not the same, the two share similar outcomes. And they’re bad.

In that same briefing, the WHO chief pointed out how variants—the very same that Strang says are circulating in the community right now—will only continue to mutate as transmissions rise. And in tow, vaccine efficacy will suffer.

The inequitable distribution of vaccines is not just a moral outrage, it’s also economically and epidemiologically self-defeating

This global (read: global) pandemic was not conceived in a vacuum; quite the contrary. It thrived and multiplied in our massively interconnected globalized society. And troubleshooting it with the individual in mind rather than seeing it as a public health problem that requires community engagement is only going to keep us chained to this hamster wheel-esque subpar existence, if not dead.

As discussed in The Coast’s earlier piece on AstraZeneca appointments getting canceled, the scrutiny that the vaccine has come under in recent weeks, over concerns around blood-clotting statistics, are not being considered within the wider picture. So let us zoom out.

Wednesday, New Brunswick did document its first case of a person dying from the resulting Thrombosis-thrombocytopenia syndrome (TTS). But, that province’s own chief medical officer of health stressed in the afternoon briefing, “the information that we have to this date is that the benefits outweigh the risks.”

As my colleague Victoria Walton so aptly framed it last week: birth control and air travel also cause blood clots. Ultimately, your chance of ending up severely ill and requiring hospitalization from COVID is significantly higher. About 1 in 782 if you’re over 60 and under 70. Meanwhile, the risk of something bad happening following a vaccination is 1 in 500,000 for that same age group.

And you can get Covid without being vaccinated. pic.twitter.com/o3KfQHc1Ib

What will almost guarantee that you won’t end up hospitalized if you contract COVID? A shot of that sweet AstraZeneca. A recent large study out of the United States, Chile and Peru found that the vaccine is 79 percent effective in preventing the illness entirely and, more importantly, 100 percent effective against severe symptoms and hospitalization.

But all this is just getting in the weeds and is ultimately detracting from the graver issue at hand: We have vaccines and we need to get them in arms as fast as possible. Part of public health’s role in this rollout is ensuring that the public is informed and educated about the vaccines, a point that Strang likes to reinforce nearly every presser. But figures like Nova Scotia’s COVID-daddy also wield soft power, so he must be all the more cognizant of the messages he's relaying in both action and word.

Tuesday’s presser wasn’t the first time Strang revealed a possible underlying preference for certain vaccines. Unlike the prime minister, the leader of the NDP and even the premier of Ontario, all of whom made the calculated decision to reassure the pandemonium surrounding AstraZeneca and opted to get the dose, Strang did not.

"If I had taken the AstraZeneca vaccine, that would have been a vaccine that somebody 55-to-64 who has no other choice," said Strang. "They wouldn’t have been able to use that vaccine."

If you went out and got the AstraZeneca vaccine, you are a hero.

It's a safe and effective vaccine, and you have taken an important step to protect yourself, your family, and your community.

At first blush, the thrust of Strang’s quote may appear to be a person who is engaging in a noble act. But Strang is a public health expert. So either he knew how receiving the Pfizer vaccine instead of AstraZeneca would be interpreted by the public, or he didn’t foresee the possible fallout such a choice would have on a community facing significant vaccine hesitancy.

For his sake, I hope he was thinking with the former in mind, but neither option instills an overly warm and fuzzy picture of the person overseeing Nova Scotia’s vaccine rollout.

How 40-to-54-year-olds can book an AstraZeneca vaccine appointment: Online booking for the 10,000 AZ doses Nova Scotia has available opened early this morning.

Tuesday, a woman in her 50s passed away. She was at home, and the full details around her death are still not known. We don’t know how or when she contracted the virus, but she was considerably younger than most of the other people who have died in Nova Scotia due to complications from the COVID-19 virus. And just last month in New Brunswick, there was a man in his 20s who died as a result of the virus. We can’t say whether or not those lives would’ve been saved had more people received a vaccine, as we don’t know when the pair contracted the virus or their personal health records. We do know, however, that vaccines save lives, but really only work if the whole community comes together and lifts their arms in a virtual syringe-filled “cheers.”

You know you’ve missed the mark in educating the masses about vaccines when you hear people treating getting a certain one like they’ve snagged the latest iPhone drop. It’s far worse, however, when you hear your own provincial doctor come out and confirm those ill-informed biases with the simple uttering of the word better.

Just do the right thing; keep it simple; JUST DO IT. I don’t care whatever cliched and well-worn phrase you need to tattoo on your forehead to do it. Just please, don’t cancel your appointment, and take whatever vaccine you can get. For everyone’s sake—for those who have died before we even had access to vaccines—think about how your one act is not only keeping you safe, but more importantly, your community.

There is ultimately nothing better than that.

Johanna Chisholm heads up The Coast’s audience and engagement team, assisting in all things digital and writing the daily newsletter, The Daily Drift. She previously worked as an international reporter in South Africa, Cambodia and Israel and has worked at places like the AFP, The Globe and Mail, and most recently...
More

COVID cases and news for Nova Scotia on Wednesday, Jan 12