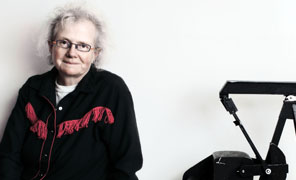 For some reason, the fact that Rita McKeough also won a 2009 Governor General’s Award in Visual and Media Arts, slipped past me. McKeough, who is an iconic presence in Atlantic Canadian visual art and a mentor to many artists, moved to Calgary a few years back, but her influence remains strong here, in artists like Eleanor King and Stephen Kelly.

McKeough's performances, often about memory, the body and human impact on the environment, reflect the artist's strong sense of humour and storytelling skills. In 1993, for McKeough's Take it to the Teeth installation, she chewed a gallery wall—taking bites, then spitting it back out again. According to her NSCAD faculty profile: "The digestive journey began with huge sets of teeth on both sides of what looked like a chaotic bedroom, taking viewers through a number of elements before culminating in packed suitcases carried through an anus door.

"'Humour is something that's always been there in my work, even if just very subtle,' Rita says."

McKeough is also a drummer, which she has incorporated into her performances, and was involved in several local bands, including The Confidence Band, with Matt Reid, Rebecca Young and Stephen Kelly.

My favourite performance of hers occurred at Keji National Park a couple of years ago, as part of Eyelevel Gallery's Wilderness Acts. She created a collection of tiny robotic turtles, and dressed as a parking attendant, herded them up. Real-life turtles, indigenous to that area, are often getting killed by cars. She is also the artist behind one of my favourite drawings hanging in my house. It's off a goose and a rabbit with a skateboard.