In May, Tony and Sam Rinaldo bring Italian American eats to Windsor Street. 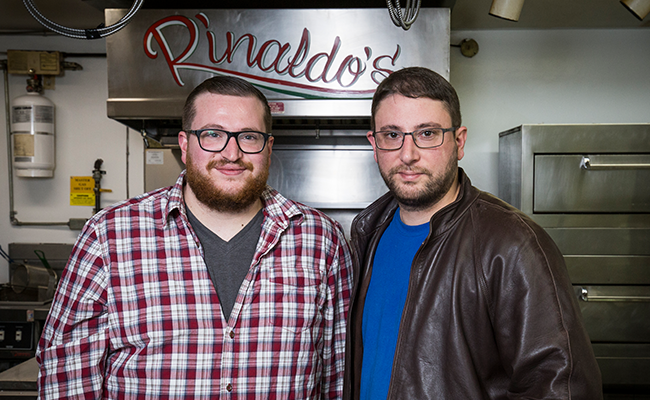 Salvatore Rinaldo didn’t exactly leave a trail of breadcrumbs for his sons, Tony and Sam, to follow. It’s more like a path that was coated in breadcrumbs, fried, and covered in marinara. Who wouldn’t follow that path?

He was, of course, the founder of the original Salvatore’s New York Pizza (now Salvatore’s Pizzaiolo Trattoria). Tony and Sam are just about to open Rinaldo’s (2186 Windsor Street), a brick and mortar restaurant and obvious next step for the brothers who, for the past few years, have been slinging hot dogs and heroes through T-Dogs and their sandwich company, Rinaldo’s Italian American Specialties, a regular feature at the Good Robot gastroturf.

The Rinaldo brothers have teamed up with Steven Haynes, an old family friend who owns winemaking supply store Noble Grape. “Steven was actually the first employee for Salvatore’s New York Pizza. He was my dad’s employee,” says Tony. “When I was away in Montreal I’d come back to visit and we’d hang out at family events and he always said he was interested in doing something with me and Sam, so when I finally moved back we decided it was the right time to do it.”

The restaurant is currently under construction in the old Good Food Emporium space on Windsor Street, with plans to open in May. While the Rinaldos will run the kitchen, Haynes is working on the wine portion of the bar program with another family friend, award-winning bartender Jenner Cormier, consulting on the cocktails. There will also be a half dozen taps from local craft breweries.

The main plan is for the Rinaldos to put their own spin on Italian American classics. “We definitely want people to feel really comfortable and at home here,” says Tony. “It’s food done the old school Italian way but using Italian American flavours, the essence of what was created in the New York area.” This means dishes like penne alla vodka, chicken parmesan and pizza. Pasta will all be made from scratch—cavatelli will be a house staple—and favourite sandwiches like the eggplant parm and meatball hero will also be on the menu.

“We have dishes that are inspired by recipes that have been passed down from my father, my grandmother and my great grandparents,” says Tony. “We have recipes from my grandfather, his sausage recipe, my great grandmother’s Sicilian olive salad. Not to say we’re going to put that on the menu, but we have a treasure trove of recipes that Sam and I are just kind of making our own.

“It’s nice to take those, take that history and make it our own,” he says. “We value where we came from.”