Review: The Lighthouse shines on

By turns, a Lovecraftian horror; a Shakespearean haunt; high visual art; and a drunken buddy comedy, the Nova Scotian-shot flick lives up to its hype. 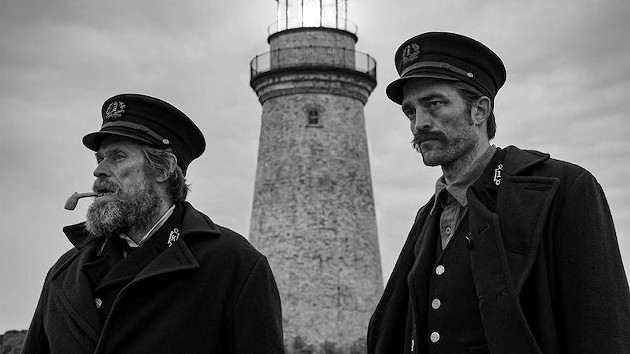 Film still via finfestival.com
Willem Dafoe and Robert Pattinson stare into the abyss in The Lighthouse.
Anyone who’s ever stood at the edge of the ocean shore and gazed over a roaring Atlantic at night can attest to its eerie nature. What lies beyond the rocks, where we can only catch glimpses of whitecaps, small changes in grey shades of darkness? Add a storm and the tension of survival sets in. Isolate yourself on an island and all bets are off. Bring another person along—with their own ghosts and profound regrets—and remove all sense of time, and the capacity for madness runneth over.

There’s little more to The Lighthouse, Robert Eggers’ follow-up to The VVitch, than this idea. There’s also so much more.

It is, by turns, a Lovecraftian horror; a Shakespearean haunt; high visual art; and a drunken buddy comedy. Willem Dafoe’s ancient lighthouse keeper gets an unexpected running gag that pays off dividends, and you also get to hear him say, “You’re fond of me lobster, ain’tcha?” during a tender domestic argument. The levity, in the crushing bleakness of springtime in Cape Forchu (1890s Maine in the film) provides welcome release but never lasts.

Beginning with a shocking event that changes the winds for worse, Eggers builds an atmosphere where anything can happen—mermaids, sea monsters, ghosts, sinister gulls—and Pattinson and Dafoe lean heavily into performances both grandiose and razor sharp.

Shot on black and white 35mm film at a 1.19:1 aspect ratio (nearly square), Eggers and cinematographer Jarin Blaschke leave no room for fat. Nearly every single shot, frozen out of context, would be a stunning photograph that tells its own story.

Eggers has been praised at length for his vision and his newest work luminously expands on the evidence for that. The Lighthouse taps into the strange power of the sea and the destruction that phantoms and isolation can wreak—it’s an unsettling triumph from a singular director.