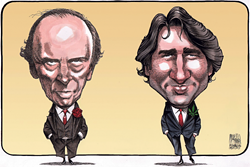 With only a swooping hairline needed to bring him to mind, there has perhaps never been a POTUS more easily caricatured than Donald Trump, and few Prime Ministers that have looked better in comparison than Justin Trudeau.

But it is Bruce MacKinnon’s job to knock Trudeau and other important Canadian figures down a few notches, as he has done for over 30 years as an editorial cartoonist for the Chronicle Herald. In Prime Suspects MacKinnon has turned his keen eye for caricature on Canada’s 23 Prime Ministers with cheeky, bobble-headed portraits of current and past PMs, from the somewhat whimsical painting of Sir Wilfred Laurier as Spock to cartoons of a bulbous-nosed Harper.
If you are not a history buff, never fear: a cheat sheet has been provided to explain any John J.C. Abbott jokes that may be missed. Other jokes, like Trudeau as a Bieber-esque popstar, will land easily.