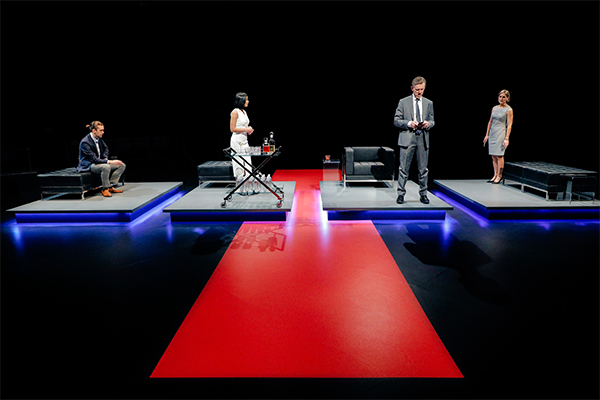 Lee fiddles with the buttons on his slim-cut suits. Lee drinks too much. Lee inflicts harm. Lee wears his hair in a greasy man-bun, a double-looped-at-the-nape physical manifestation of his personality. Lee doesn’t think he has a problem with women.

Post Democracy is available as a digital performance through Sunday, April 25. Tickets are $20 for an individual, $35 for a household and $10 for students from the Prairie Theatre Exchange box office.
Lee is wrong about that. Lee is wrong about a lot of things. Just ask anyone who’s watched Post-Democracy, the new play by Halifax’s most decorated playwright Hannah Moscovitch. It’s impossible for them to come out of it any other way than seeing the story’s antagonist as a square-shouldered stand-in for the worst things toxic masculinity has to offer, a Justin Timberlake without the middling musical talent.

If that feels like a lot off the top, get ready because Post-Democracy is heavy and demands that its audience lifts with their legs. The play—which clocks in two minutes-and-change short of an hour’s runtime—takes place in a quiet hotel lounge in a nameless foreign country, where three high-powered executives and their assistant discuss an impending business deal while a sexual misconduct scandal brews back at the office. As tensions mount and tempers flare, secrets are unearthed in what becomes a powder keg conversation of privilege and expectations. (Now might be a good moment to warn you, too, that the dialogue includes discussion of rape and child abuse.)

The quiet brilliance of Hannah Moscovitch: Halifax’s most decorated playwright continues to shine.

Moscovitch’s follow-up to Old Stock, the six-time Drama Desk Award-nominated, international smash musical about how to love after the horror of war, Post-Democracy is entirely within the playwright’s wheelhouse. Who else but her, the playwright of the Governor General's Award-winning What a Young Wife Ought to Know, could dive into the murky swamp where sex and power intersect? Subject matter that could feel forced in less-deft hands is rescued from an HR manual and brought to painful, vivid life. 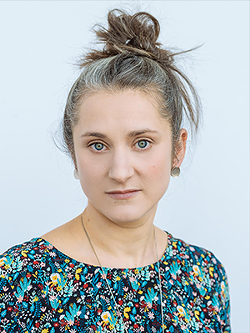 And while you might, if you’re lucky, be used to witnessing Moscovitch’s work live, this world premiere looks a little different, thanks to COVID-19. Rather than an in-person performance, you can watch Post-Democracy while you shelter in place by purchasing a ticket to the pre-recorded, digital performance. (Wondering what a digital performance is? It’s a live recording of an acted piece—sort of like watching a live concert DVD. Netflix’s Kerry Washington-starring American Son is an example of the emerging medium—but please believe me when I tell you that I’ve watched both, and Moscovitch’s piece is better.) One tiny scrap of silver lining in this whole pandemic is that it means you’ll get to see this show sans plane ticket, even though it’s being put on by Winnipeg’s Prairie Theatre Exchange.

The stage setup for Post-Democracy—four raised platforms dotted with sleek, modern living room furniture the characters collapse in and preen upon—was probably created to aid physical distancing of the cast. But, visually, it drives the story’s mood: Here are four people so far removed from one another, they might as well be waving from separate tectonic plates sliding by and crashing into each other. How, asks Moscovitch, as her characters hurl insults, can we talk about the ways power structures still exist between classes and genders when these valleys of understanding lie between us?

And if you’re worried watching four people talking over cold martinis and even colder glares will get boring? Well, the small cast and lack of set change is only a benefit, a reminder in the overstuffed-plot Netflix Originals age that really, when the themes—like sexism, fetishization in the workplace and rape culture—are big and the dialogue fleshed out, you’ll be so enrapt you won’t even think of picking up your phone. The pace is brisk enough you can’t half-watch it, but you also can’t look away, so it works.

Subject matter that could feel forced in less-deft hands is rescued from an HR manual and brought to painful, vivid life.

Lee (Kristian Jordan) isn’t the only character in this play you’ll hate. You’ll also hate Justine (played by Stephanie Sy in a show-stealing turn), who waxes poetic about her charity work in Africa the way Madonna talks about Malawi. You’ll hate Shannon (Alicia Johnston), the HR fixer/executive assistant smothering the flames of the sexual harassment complaints, for being internalized misogyny personified. But most of all, you’ll hate Bill (played by Arne MacPherson), the company’s CEO. He is Moscovitch’s symbolic stand-in for the white men of a certain age who guard the gates to systemic oppression. (The company the four travelled to see is even called Systemis, a neon-highlighted clue to who these people are, in case you’re not getting it.)

As it comes out that Lee could be moments away from his own #MeToo moment—and that Justine will fall victim to the gendered expectations of performance that exist in every office—the dialogue rings uncannily and uncomfortably true: Moscovitch knows this is exactly how people talk about a bad hookup or botched promotion, when those sorts of topics ever get dragged into the light.

The play asks a lot of questions: What price can you put on past harm? How do people cope when they survive the worst thing that will ever happen to them? How can the power players of the world hear our concerns and still make the choices they make? But most of all, Moscovitch wants us to wonder: What will it take for the Bills of the world not just to hear us, but to sit up in that leather lounge seat and listen?