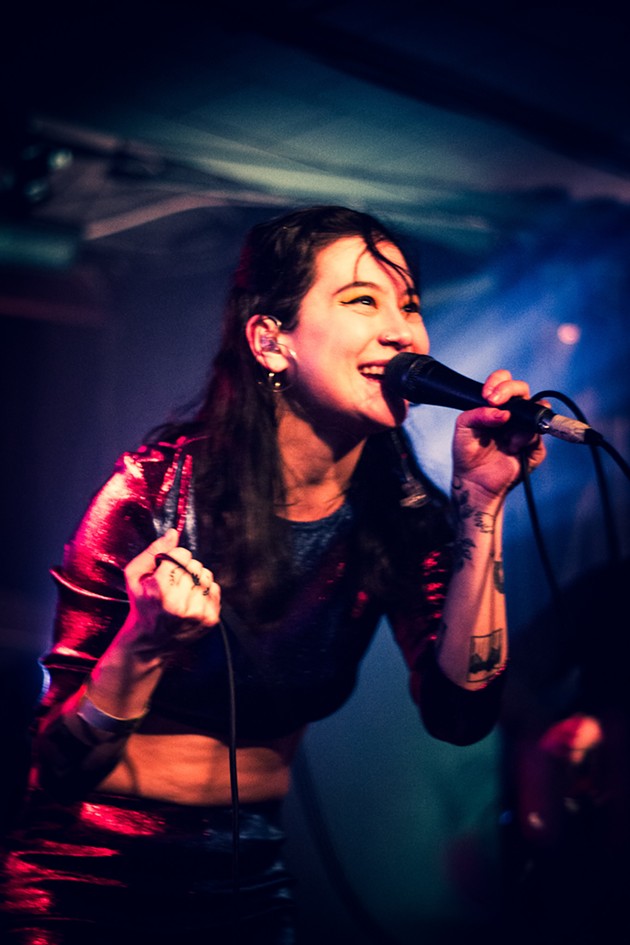 
As fans started to pour in, stash their coats and crack open a cold Olands, excited chatter about the anticipated bands could be heard around the bar. Toronto's Doomsquad got the night off to an electric start. The sibling trio comprised of  Allie, Jaclyn and Trevor Bluma are currently touring their newest album Let Yourself Be Seen. They got the Haligonian crowd dancing as they shredded their trancy, psych tunes.

As fans took a quick break to replenish their Olands and hack a sneaky dart outside, Halifax natives Beauts took to the stage. Beauts has a New Order-esque sound that makes it impossible not to sing along with its melodic choruses. The band has cultivated a passionate fan base over the years and those fans showed their love as they screamed out for more from the five piece band of (let's be real) absolute beauties.

Then, Montreal trio Caveboy came bursting onto the stage. The sheer amount of energy these girls have puts thats relentless Energizer Bunny to shame.
Synth player Isabelle Banos' love for performing and for the Halifax fans exploded out of her by means of her dance moves and proclamations to he crowd: She yelled out to the sweating, elated  fans “Gosh you guys are beautiful and I can't even see you, we love you Halifax!” After getting every single person dancing they ended their set with possibly the ultimate booty-shaking cover, “I want to Dance with somebody” and frankly, there is no better way to end your set than with a bit of Whitney Houston.

Michelle Zauner Next, Japanese Breakfast emerged from the fog. The last time Japanese Breakfast played at Halifax Pop Explosion, it was opening for Tegan and Sarah, so feeling much like a proud aunt, it was incredible to see Michelle Zauner's solo project headline this year. The set got off to a mind-bendingly good start with “Diving”, then dove into “Heaven”, “Woman” and of course, the absolute banger "Road Head”.  Zauner was funny and had sharp, quippy intros for her notoriously sombre-skewing songs.When the band started to play “Machinist”, she said: “This next song is about falling in love with a robot,” then jumped off the stage and danced around in the smitten crowd. Stopping only to take a sip of Miller Lite, she closed her set with “Ewtly”.

But, the fans were not letting them go without an encore: Screeches for Japanese Breakfast rang out deep into the attached restaurant The Local. Zauner gave the people what they wanted. Continuing on the theme of finishing with a cover , she played “Dreams” by the Cranberries.

Four bands from three provinces in one venue all added up to one spectacular night.