Review: It's A Wonderful Life 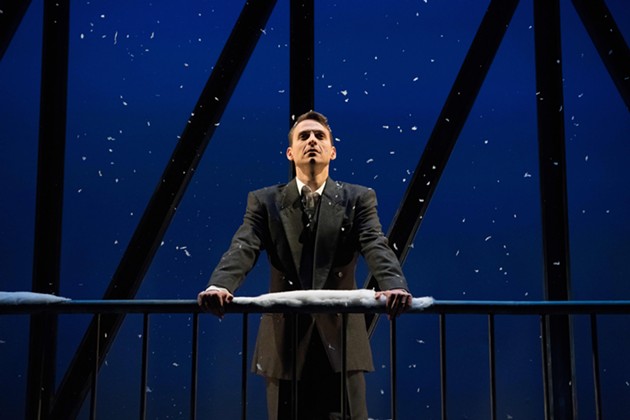 Photo by Allan Zilkowsky
Chris Zonneville as George Bailey.
Neptune Theatre’s It’s A Wonderful Life is a reimagining of the beloved 1946 Frank Capra film, adapted and directed by the theatre’s outgoing head honcho George Pothitos. The holiday staple tells the story of George Bailey (Chris Zonneville) a man generous to a fault until his trust in the world gets him into some hot water – or cold water, as it were – involving Mr. Potter (Steve Baker), a slimy banker. When George hits rock bottom, his guardian angel Clarence Oddbody (Randy Hughson) saves the day by showing George the impact his life has had on the people around him.

Zonneville plays George with a quiet charm and just enough of the familiar Jimmy Stewart lilt in his voice. Hughson as Clarence is hilarious and bombastic and brings a much-needed levity to the stage. A rotating cast of supporting characters, including some very talented kids, offers stellar performances all around. It is only Baker’s villain that misses the mark. Mr. Potter was ranked #6 in the American Film Institute’s list of the 50 greatest villains in American film history, but Baker’s performance feels rather lackluster, with none of the sinister energy that gives the character his edge.

All told, It’s A Wonderful Life is a heartwarming story with charming performances, and is sure to be a crowd pleaser for the nostalgic Christmas crowd. Pothitos’ adaptation hits every familiar beat of the movie, but feels sometimes like not much more than a highlight reel of the film.