Refugee support handed off from feds to province

One year after Syrian refugees landed in Canada, is Nova Scotia ready to step up? 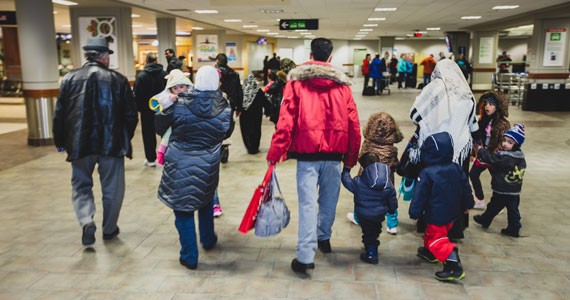 For Syrian refugees, the 365-day time period to obtain assistance from the federal government is coming to an end. But if refugees in Nova Scotia still need help there’s one more place they can turn—the provincial government.

During the two-month span, 838 Syrian refugees—or 75 percent of Nova Scotia’s total Syrian refugees in 2016—resettled in the province. According to data from Immigration, Refugees and Citizenship Canada, 653 of them were government-assisted.

With federal living allowances ending for many of the refugees in the next few weeks, these new Nova Scotians unable to support themselves and their families will instead be turning to financial assistance from the provincial government.

Fawaz Al-Ahmad is one of the lucky few who has been able to obtain employment in Canada. He started as an auto body worker, a job he had in Syria, at a garage in Dartmouth earlier this month to help support himself, his wife and their six children.

It’s impossible to predict how many refugees in Nova Scotia will have to apply for income assistance, but it’s likely to be many.

A recently released report from the Canadian Senate indicates that while nearly half of the privately sponsored refugees have found employment, only 12 percent of Syrian refugees assisted by the government have found work.

One of the biggest obstacles is language. Al-Ahmad is capable of speaking some words in English, but nearly a year after his arrival he only just began English classes in November.

According to Citizenship Canada, that’s a common story for many of the Syrian refugees. Refugees “outside Quebec report a need to improve their language skills as a barrier to employment,” Sonia Lesage, spokesperson for Citizenship Canada, writes in an emailed statement.

It’s something the Nova Scotia Department of Community Services is preparing to deal with. Heather Fairbairn, a spokesperson for the department, says they’re in the process of hiring an Arabic speaking caseworker to make the transition from federal to provincial governments a little easier.

“We are here and we will be ready for new Nova Scotians who may need our assistance,” she writes in an email.

For Al-Ahmad, who in the past year has seen his family’s fortunes change drastically, he hopes the future will allow them to integrate more into Canadian society.

“I am overwhelmed with gratitude,” Al-Ahmad says. “The generosity from the Canadian government is something I never expected.”

COVID cases and news for Nova Scotia on Thursday, Oct 14

COVID cases and news for Nova Scotia on Wednesday, Oct 13