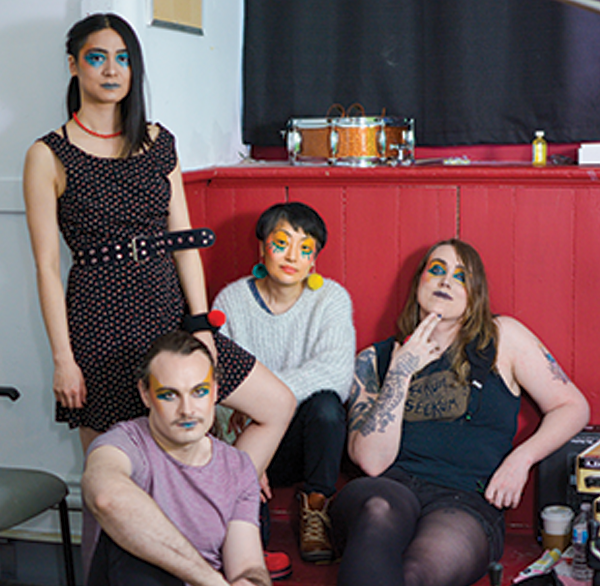 For its label debut, the Halifax four-piece is sharp and sunny.

In Century Egg’s world, fairy tales are a worldview, Tim Tam cookies are straws for milk and blending Mandarin pop with frayed-edge indie rock is a pairing so natural—so catchy—you’ll wonder why you haven’t heard it a million times before.

But the thing that’ll lodge into your mind with even more tenacity than a chorus from the Halifax four-piece is the fact that this sound is unlike anything else on your Spotify's heavy rotation. Where else can you hear a Cyndi Lauper affectation (“Ring a bell”) next to grimy, sloshing guitars (“I Will Make Up A Method”)?

The year the music lived: Despite everything—including the odds—some amazing music was made in 2020. Here, we look at some of the best.

On the band’s recently released Little Piece of Hair—its debut with the Forward Music record label—Century Egg feels its most settled and focused yet, dousing its sludgy punk instincts in glitter. The cleaner production makes the music more approachable, but longtime fans of the band don’t need to worry, because a disparate list of influences and comparisons still ring true: The new album flirts with the edges of hyperpop, is perfect for fans of CHAI and is bound to be a soundtrack for believers in #hopepunk.

“Do you want to dance?/Do you want to smile?/Let’s do this for a while/Every night” sings Shane Keyu Song, Century Egg’s vocalist, on the album opener “Do You Want To Dance.” It’s the same buoyant energy that made the band’s 2020 EP We Can Play feel as sweet as the early pandemic favourite Dalgona coffee—but this time, the caffeine jitters are tempered, the video game influences gone.

Century Egg’s new record is a sunny-side-up return: Halifax's Mandopop saviour drops a five-track EP to help you have a "fairyland kind of view" of life.

In its stead? A new, more robust rhythm section, thanks to Matty Grace on bass and Meg Yoshida on drums. It’s the perfect foil for the sugar rush of Song’s vocals, and helps both band and listener make good on the promise of dancing your worries away.

"I think we all want to do something that is nice, instead of cool,” Song told The Coast back in 2016. “At the beginning of this, the concept was not to try to be cool, because if everybody was trying to be nice, the world would be a better place." Five years and three Century Egg albums later, it’s a vision worth holding—and humming along—to.