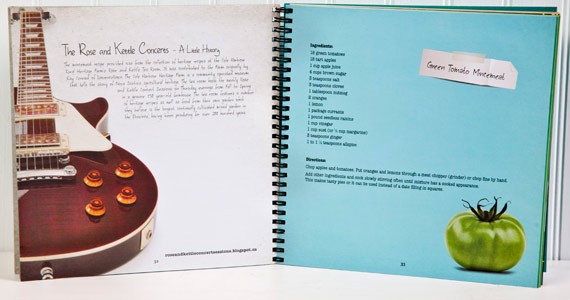 "I love to cook," says Lana Grant. "And I've always wanted to do a cookbook."

That simple sentence, a breezy thought that has run through many a mind, led to an involved year-long project for Grant, who is best known for her 20 year career as a singer-songwriter. With help from a wide range of local musicians—and her collaborators, Adriana Afford and Darren Hubley—she has just released her first cookbook, Musicians, Memories & Morsels.

The book is, at its heart, a community cookbook—an arts community cookbook, to be more specific. A coterie of artists from the vast east coast music community offers up tales from their kitchens and every day recipes that are near and dear to them. Grant took her influence from church and community cookbooks, with their simple design aesthetic and, perhaps most importantly, their coil bindings.

"All I had in my mind was community and church cookbooks: I love the coil binding, I love that you write 'This is a great recipe, four stars!' on the pages," says Grant. "I wanted it to give that same feeling: when you read a story and a recipe, that it's a part of that person."

"I think people were hungry—no pun intended—for something different," she says. "A way to express their love of east coast music in a very different way. And I think the thing that is really going to set this book apart is that it's not just a cookbook, it's really about the people: it's emotional stories and insights into the artists that they wouldn't normally share with you."

Artists like Melanie Doane, In-Flight Safety, Rich Aucoin and Jenn Grant give recipes for everything from tuna melts to seared scallops with blueberry bacon jam. Ever a wordsmith, Al Tuck offers a backwards look at some G-rated childhood bootlegging, with a wayward tale of homemade root beer distribution. Stories are cute, funny, nostalgic and sweet. Most of all, they are full of personality.

"These stories are the heart of cooking that people sometimes forget about," she says. "So many cookbooks just have the recipes—they don't have heart. In some of these stories you feel the moment where they're experiencing the food, or a personal memory. It's exciting."

Whether the memory comes from time with their families or time on the road, it's a personal connection to the food that is at the core of all of the artists' stories.

Folk singer Kev Corbett's decision to participate in the book was simple. "I already write songs about farmers' markets, about food as ritual and metaphor," he says. "I've known Lana since 1998 and I'll support anything she does, particularly when the fit is this obvious."

It was Corbett's chance encounter with a taco truck during a 2010 tour was the inspiration for his contribution, a fish taco recipe.

"I love their perfect sidewalkiness, simplicity, freshness, and lack of props," he says. "The ceviche taco is something I made up, like a song, as a backflip over my own idea of taconian perfection, and is no less of a hedonistic joy. It's like a love song to pleasure."

Grant would say the same thing about the book itself.

"It's a good-feeling project," she says. And she hopes to keep that feeling going. "I'm hoping that next year, if I can do it, I'd love to put together a Christmas CD featuring some of the artists from the cookbook and give it another life. Then," she says, "then I'd like to do a second book."