A recession is here. Can Halifax’s small businesses hold on? | News | Halifax, Nova Scotia | THE COAST

Photo: Martin Bauman / The Coast
Kate Pepler, owner of The Tare Shop, says she is seeing about 40% less traffic than before the COVID-19 pandemic.

A recession is here. Can Halifax’s small businesses hold on?

Kate Pepler doesn’t run from a challenge. As the founder and CEO of The Tare Shop, a package-free grocery store and cafe with locations in Halifax and Dartmouth, the north end-based entrepreneur opened her first brick-and-mortar store before the age of 25. For more than a year and a half, she limited her garbage output to a single, small glass container. She’s steered her business through two and a half years of a pandemic, transformed it to a Certified B Corporation—an international distinction reserved for transparent, socially-minded businesses—and managed to expand to a second location.

But if you catch her in a quiet spell at her Cornwallis Street store, she’ll concede that, at times, the fight is taking a toll.

“We saw our lowest sales months ever this past summer,” she tells The Coast on a cloudy Tuesday morning.

The Tare Shop fundraiser takes off: The zero-waste shop has raised $37,000 and counting to keep its doors open.

Three years ago, that would have been near-unthinkable for Pepler. Her business’ 2018 launch, which coincided with a G7 minister’s meeting in Halifax on plastic waste reduction, thrust the Toronto Island-raised conservationist into the national spotlight and brought more business in her first two years than she “ever anticipated.” Then, COVID-19 hit. Supply chain issues—from flour and oats to beans to the glass jars Pepler stocks her bulk goods in—hampered her ability to keep her stores’ shelves full. She crowdfunded more than $46,000 in May to keep the business afloat, but still, she says, making ends meet has been “really hard.” 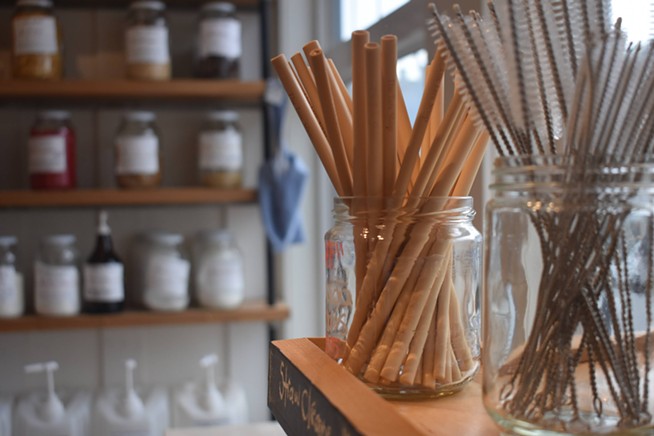 And now, in the face of a likely recession that could last into the fall of 2023, she’s hoping for help, wherever it may come from.

She’s not the only one.

Bank of Canada raises interest rate to 3.75%—highest level since 2008

Economists and linguists don’t always agree on what constitutes a recession, or whether it’s arrived: Oxford defines it as a time with “less trade and industrial activity than usual,” while the “Sahm rule” focuses on a country’s unemployment rate. Still others define it as at least two quarters of economic downturn. But if you’ve been living in Nova Scotia these last few months, it sure has felt like it’s already here.

Housing prices in the province have dropped by nearly $80,000 from their peak. Groceries in Canada have gone up by 11.4% in the last year. More than half of 1,515 Canadians polled in a recent survey said they plan to cut back on spending over the coming holidays.

Canada’s central bank skirted the word “recession” in its Wednesday update—at which time it upped its benchmark interest rate to 3.75%, a level not seen in 14 years—but noted that economic growth is “expected to stall” through the end of 2022 and the first half of next year. Spending by households and businesses is “softening,” the Bank of Canada noted in its release—which, like “negative profit,” is bank-speak for “things are, uh, not good.”

That’s cause for concern for small businesses in Halifax, but also for the Canadian economy. As of 2020, small businesses made up 98% of all Canadian employers, providing paycheques to nearly two-thirds of the country’s labour force, per Statistics Canada.

It’s never been easy to be a small business: More than a third of Canada’s new businesses fold after three years. But toss in a pandemic and global downturn, and the added financial uncertainties can sound like a death knell.

“Small businesses have just come out of two years of hell with COVID,” economist Laura Jones told CBC News. “And they came out of that to face supply chain challenges, inflation, interest rate hikes and labour shortages.”

‘I know how much I’ve put into this space’

Fantanesh Attomsa can attest to Pepler’s predicament. As a registered massage therapist and founder of Blue Nile Massage & Wellness, a clinic on the second floor of Spring Garden Place, Attomsa has fought to keep her seven-person practice going, all while neighbouring small businesses have shut their doors around her. She can list them off, one by one.

“It's just daunting,” she tells The Coast, “because I know how much I've put into this space… and how heartbreaking it would be to have to close and shut down.” After starting her home-based practice in 2018 and seeing her clientele grow “steadily” for three years, Attomsa opened her Spring Garden clinic in May. Some days are “great,” she says, but others? Well, those can be “a little bleak.” On a late Wednesday afternoon, the mall is pin-drop quiet—and so is her massage clinic’s waiting room. She opts to close early for the day.

Like Pepler, Attomsa isn’t immune to the stresses of entrepreneurship. She thinks about exit strategies more than she’d like to.

“All my savings are done, my RRSP… I’ve went into loans,” she says.

That’s why, when Pepler posted on Instagram about her recent business struggles, Attomsa chimed in. So did a half-dozen other Halifax small business owners and entrepreneurs, from The Vault jewellery store to fashion designers Ana + Zac. The Has Bin, a boutique north end consignment store, shared that it’s been “harder and harder” to predict sales. The Nook, a Gottingen Street espresso bar, shared that traffic is “about 60-70%” what it used to be pre-COVID, and around 20% what it used to be after 4pm.

“The struggle is real,” The Nook confessed.

Both Attomsa and Pepler made use of federal and provincial grants and loans in the early days of COVID-19. But they aren’t the financial safety nets they’d hoped for.

“There's definitely a lot of funding out there for Black entrepreneurs now, which has been great,” says Attomsa, who was born in Ethiopia and grew up in Halifax. But she laments the “invasive and stripping” application process, which can feel akin to “jumping through hoops”: credit checks, questions about life insurance policies and personal net worth.

“Just to get a small business loan, they ask you about everything… [and] when you think about your debt-to-income ratios and it's in your face, it’s like, ‘Oh my god, I'm not worth anything, actually.’”

That screening process can be especially prohibitive to small business owners who might have overcome bad credit or bankruptcy from years earlier, or endured other hardships—financial or otherwise—that don’t look as flattering when printed in black and white.

“It's like everything just chases you and follows you,” Attomsa says.

The grant process hasn’t been overly kind to Pepler either. She qualified for the Canada Emergency Business Account (CEBA) Program, but says she was ruled out of “a lot of COVID supports” because she’d opened a second Tare Shop location under the same business license. Despite her expenses more than doubling, her company’s combined sales figures made her bottom line look stronger than it was, she says. And the wage subsidies The Tare Shop qualified for didn’t help much with paying her staff through the pandemic.

Tasked with shielding Nova Scotia’s small businesses from the looming recession is Lunenburg MLA Susan Corkum-Greek. The province’s minister of economic development, elected to the House of Assembly in 2021, oversees a portfolio that includes Develop Nova Scotia, Invest Nova Scotia and Tourism Nova Scotia—and lists, as its public aim, to “drive economic growth and support businesses to grow and prosper.”

In the case of bracing for a recession, she adds, that may look like “helping them find new customers beyond their traditional markets,” or “helping to examine or adapt new business models” or “looking at new processes that can improve productivity.”

Nova Scotia’s approach to supporting small businesses hasn’t always been expedient. Premier Tim Houston floated a provincial loyalty program in July that he said would be “a buy local program like no other,” designed to drive spending within the province, but Nova Scotia Loyal—as it’s been branded—hasn’t come with a roll-out date.

“Largely, buy local programs in the past tended to have a big media buy-in, and they achieve a certain level of success, but they seem to have a fairly predictable ceiling,” she says.

That’s not what she wants to see happen with Nova Scotia Loyal, stressing the incentive program “will be something that will continue and carry on”—including at the government level.

“I don't think I can turn to Nova Scotians going out to do their weekly grocery shopping and be asking them to please choose local, and we as a government not commit to doing the same. So there are other initiatives tied to, you know, engaging local procurement for the purchases that government makes,” she tells The Coast.

Pepler knows she isn’t the only business owner feeling the pinch—and it isn’t her first hurdle as an entrepreneur. Most mornings, you’ll find her tending the counter at her Cornwallis Street store, chatting with regulars or one of the 60-odd local suppliers who are part of her business’s zero-waste “circular loop.”

“From an ego perspective, it’s really reassuring that it's not just my business struggling, that it's not that I've done something wrong or that I'm bad at business,” she tells The Coast. “But it's also really heartbreaking and devastating.”

She chalks the drop in walk-in traffic, in part, to burnout—“Collectively, we've been living with so much bad news and trauma since the start of COVID,” Pepler says—but also knows that it’s hard to ask customers to come in when they’re dealing with their own financial hardships.

Mostly, she misses the community. It was one of the reasons she wanted her store to have a cafe. Her Portland Street store in Dartmouth is screening Halloween movies Thursday night to bring people in the door.

Attomsa, too, craves the connection she first found through volunteering—whether at the North End Community Health Clinic or the Adsum House for Women and Children. She envisions a day when Blue Nile has multiple branches, “really serving the community” and making “health options accessible” in places where they aren’t always within reach.

But first, there are more immediate matters on her mind.

“I'd love all my staff to be fully booked,” she says. “That would be the best, best case scenario.”