He proposed on bended knee. 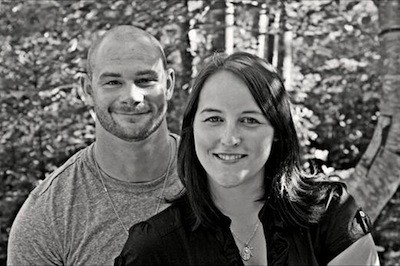 Wednesday, July 6th 2011 seemed like a regular Wednesday to me. I was planning to have dinner with some of the girls and we decided to invite the guys to come along. Complete unaware he had gone out and bought me and engagement ring.

We have been together since 2002 (high school sweet hearts I suppose) I’d been teasing about how it would be so neat to get married on the date he had asked me out, as September 22, 2012 would be our 10 year anniversary as a couple. So I was sitting outside on the front deck waiting for the crew to head out for supper. He was acting really strange, he kept suggesting we go down in the backyard where it was cooler (realistically it was not) I kept telling him to just sit down we’d be leaving for supper in a minute... when finally I gave in and followed him down to the backyard.

I was completely oblivious to the fact that he had pulled something out of his front pocket (because I was texting haha) when I finally looked up he was down on bended knee with the open ring box in his hand. He asked me to marry him and in a complete state of shock I managed to squeak out “BUT OF COURSE!!"

It was the greatest day of my life. I immediately started calling and texting everyone... before he could even say “let's surprise them all at dinner” haha.

My mother passed away in March so it was a very emotional occasion after the fact, knowing that one day this would happen and she would not be here to celebrate and help with all the planning... however she has blessed me with 6 amazing aunts who have been there for the “motherly things” I also have some very amazing friends who have been making this truly special.

Our wedding date is September 22nd, 2012 in Lower Sackville.

*As told by Rachel Slaunwhite, with edits.