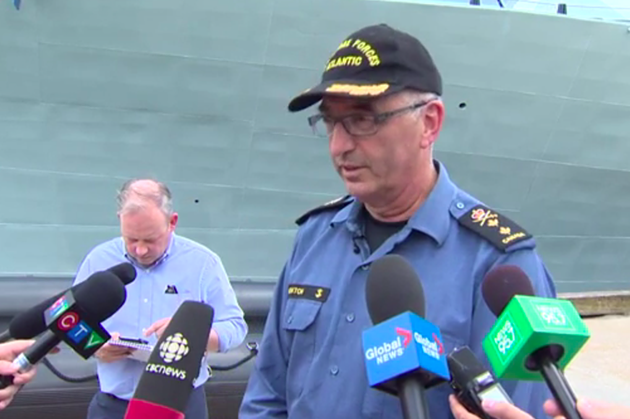 At a press conference Tuesday afternoon, rear admiral John Newton  for the behaviour of Armed Forces members who disrupted an Indigenous protest on Canada Day.

“I’ll stand here in front of you and to the Aboriginal community, to anybody, the entire public community,” Newton said. “We can do better as a system.”

Four of the men are members of the Royal Canadian Navy. One is a member of the Army. All of the men are now facing administrative and military police disciplinary action because of this past weekend’s incident.

The self-described “Proud Boys” showed up to Cornwallis Park on Canada Day, Red Ensign flag in hand, to disrupt an Indigenous ceremony that was being held to commemorate the genocide of First Nations peoples.

Newton says he was made aware of the incident by those who contacted him directly over social media, as well as from the outcry of his Indigenous friends and fellow Armed Forces members.

The head of the Navy on the east coast says he had a “one-way conversation” with the men, during which he told them the Armed Forces was taking the matter very seriously.

“I looked each and every one of them in the eye...and I told them what would happen to them.”

Although Newton says the men have a right to their beliefs, those ideologies have to get “parked” when you join a bigger like the military.

“I just told the young people that they had crossed a line, where their personal beliefs...got into the public domain,” he said. “For that, they will have to face the consequences.”

The Armed Forces members could be looking at a military police investigation to determine if their affiliation with the far-right extremist group poses a security risk to operations.

“Their attempts at humour and freshmen understanding of intellectual history are childish and boring and they’re more of an annoyance than truly offensive...[but] the danger lies in formations like the Proud Boys using irony to right-wing street politics, using irony to cover truly dangerous political positions and recruiting teenage jokesters into a fascist milieu where more extreme and less cowardly are waiting.”

Whatever the Proud Boys represent, Newton says their values run counter to those of the Canadian Armed Forces.

“We all should not be in our thinking,” the rear admiral said while praising the military's emphasis on inclusion and diversity.

Tuesday marks the second apology Newton has had to make in recent weeks due to Navy members disrespecting First Nations peoples. In late May, Newton  during a graduation ceremony for participants in the Canadian Armed Forces Aboriginal program on the HMCS Fredericton for a sailor who two weeks earlier had made a “war cry.”

Newton says he hasn’t spoken directly with local Indigenous leaders about the Proud and isn’t sure if they’ll be consulted for any disciplinary matters. He remains hopeful the men involved can learn from their mistakes and, given time, sincerely to the public themselves.

National Defence  Harjit Sajjan has also issued a statement about the Proud Boys on Facebook.

“To members of Halifax’s Mi’kmaq community and to Chief Grizzly Mamma, I am sorry for the pain this incident has caused,” Sajjan writes. “These disrespectful actions do not represent the Canadian Armed Forces members I serve as Minister of National Defence.” 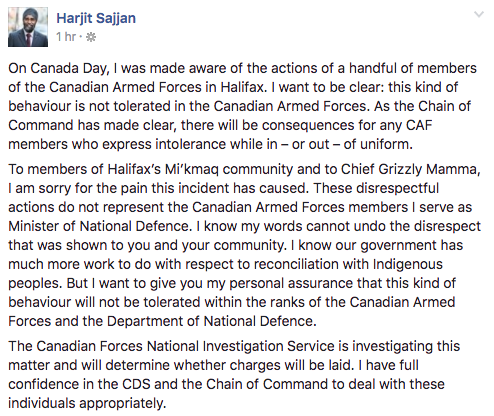