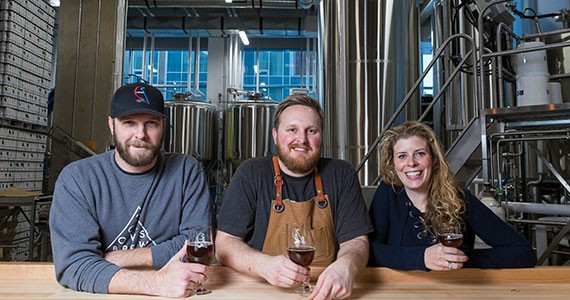 "One crow sorrow, two crows joy," begins the nursery rhyme that inspired the name of Mark Huizink, Kelly Huizink and Jeremy Taylor's new taproom. "The way we kind of think about it is you're always looking for that second crow," says Kelly. "Looking for the bright side of things."

2 Crows Brewing Company's location at 1932 Brunswick Street certainly puts the grander face of craft beer on display. High ceilings house tall rows of shining fermenters along with a bar where you can enjoy a pint and watch the brewing process at work. On the opposite side is the main bar, above which lies a colourful geometric mural that makes the industrial chic complete.

"We want it to not just feel like a bar, but that you're in a brewery drinking right out of the tanks," says Kelly.

In their search for the bright side, the three landed on Halifax as a place to make their vision a reality. "We all wanted to be in business for ourselves," says Mark. "And we're all individually passionate about beer in different ways." They're using that variety to bring 2 Crows starting lineup from fermenter to glass: Kelly will work the bar come opening, Mark (her husband) is the business side and Taylor is their brewer, with a distilling degree from Scotland under his belt. He says they're aiming to create beers that are modern and on-trend, but that also combine styles and push the envelope, such as their semi-bitter Table Beer, an oaty pilsner, and a hazy, juicy Wild IPA.

The crew will open 2 Crows officially on Saturday, January 28, and you might see their cans in your local NSLC soon.