The 13-hour hunt for the gunman ended with a lucky stop for gas. 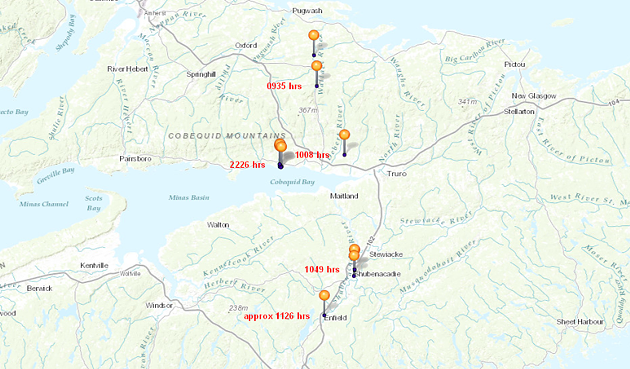 RCMP NS
A map of the communities affected in Nova Scotia
Friday morning, after days of media outlets publishing unconfirmed details, Nova Scotia RCMP finally gave an updated timeline of the events of April 18 and 19. The update came from Supt. Darren Campbell, officer in charge of support services for Nova Scotia RCMP.

He began by reiterating how small of a community Portapique is, saying it has no sidewalks or traffic lights. He said this was important to the details that would follow.

“This is a quiet and peaceful community,” Campbell said during the press conference, which had minimal in-person attendance due to COVID-19 social distancing measures.

The second cluster of events consists of those in Wentworth, Glenholme and Debert, beginning at 9:35am Sunday. The third and final cluster of crimes is in Shubenacadie, Milford and Enfield, beginning at 10:49am and ending with the suspect being taken down at 11:26am.

In total, RCMP say 22 people have lost their lives and three others were injured in the event.

RCMP NS
A map of the first cluster of crime scenes, in Portapique
The police were first contacted Saturday night, after an altercation between the suspect and a victim they later clarified to be his girlfriend. “On April 18 the first 911 call was received," said Campbell. "There was an assault between the gunman and a person known to him.”

Police say after the domestic violence incident, the woman was forced to hide in the woods overnight. She would later become a key witness, informing police of the suspect’s access to weapons and mock police vehicles.

“That was the same individual that had key information for us, that was necessary for us to understand more about [the gunman] and what he was currently in possession of at that time,” Campbell said.

The suspect then started driving down Portapique Beach Road. On the way, police say he drove past another car, shooting and injuring the driver. This man survived, and police located him when they arrived in the area at 10:26pm.

“He did describe this vehicle that looked like a police vehicle," said Campbell. "He also indicated to the responding officers that that vehicle was driving towards the beach, and that there was one way in and out of the community.”

But Campbell reminded people watching the press conference webcast that at this point Saturday evening, RCMP officers on the scene still had no idea what they were dealing with. The cops "did not have the benefit of the knowledge I’m about to share with you. The initial complaint was a shooting.”

Police continued down Portapique Beach Road, where they located victims who had been shot. “In total there were over seven locations where people were found deceased. Many of the deceased were discovered while responding members were checking homes for victims and/or suspects,” said Campbell.

At this point, police established perimeters and brought in police dogs, a helicopter and the Critical Incident program. They cleared residents from homes in the Portapique area and at that point began to narrow down the suspect as Gabriel Wortman, 51.

“The possible suspect's home and garages, I can confirm, were fully engulfed in flames as well. Two police-packaged Ford vehicles, as well as a third vehicle, were also burning on that potential suspects' property,” Campbell said.

At daybreak Sunday morning, around 6:30am, the female victim emerged from hiding in the woods. She was able to confirm several details about the murderer with police.

At this time, police issued a BOLO—Be On the LookOut—bulletin about the suspect to all police agencies in Nova Scotia. The total number of people killed in the first cluster of events is 13.

RCMP NS
A map of the second cluster of crime scenes, in Wentworth
Twelve hours after the first incidents, at 9:35am Sunday, police began receiving a second series of 911 calls from 60 kilometres away.

“Our investigation has revealed that the gunman attended a residence on Hunter Road,” said Campbell. (RCMP originally said this road is in Glenholme, but later Tweeted a correction that Hunter Road is in Wentworth.)

Police determined there were three victims at that location, at least two of whom knew the gunman. The building was set ablaze as the gunman left, heading to yet another home.

“He knocked on the door and awoke the residents. He was known to the occupants. They identified him to 911 call takers and said he was driving a police vehicle and carrying a long gun. They didn't answer the door and he left,” Campbell said.

The gunman headed through Wentworth toward Debert, shooting three more people over a 44-kilometre span.

“On the way, he encountered a woman who was out walking and he shot the woman at the roadside,” Campbell said.

Continuing along the highway, the suspect pulled over two other drivers in his mock police vehicle. The first 911 call from the Debert area came at 10:08am.

“A witness described that the suspect had pulled over one of the vehicles and then shot one of the drivers,” said Campbell.

RCMP NS
A map of the third cluster of crime scenes, in Enfield.
On the morning of April 19, constables Heidi Stevenson and Chad Morrison were working out of the Enfield RCMP detachment. Aware of the ongoing situation, the officers planned to meet where the provincial Highway 102 intersects with the more rural Highway 224.

“What appeared to be a marked RCMP vehicle approached Cst. Morrison. As they had prearranged to meet at that location, Cst. Morrison thought that the vehicle was Cst. Stevenson,” said Campbell.

But it was the gunman, in the mock police car. He opened fire on Morrison. The officer fled the scene and went to hospital with several gunshot wounds.

Morrison sent out a warning to officers that the suspect was driving south along Highway 102. Stevenson, heading to the meeting spot, was travelling north.

“At that point, both vehicles collided head-on,” said Campbell.

After an altercation with the suspect, Stevenson was shot and killed. He proceeded to steal her weapon and ammunition.

“A passerby had stopped and was fatally shot by the gunman. The gunman set both Cst. Stevenson's vehicle and the replica police vehicle on fire,” said Campbell. The gunman left the scene on Highway 224, in the passerby’s silver SUV.

He drove the stolen car to the home of a woman he knew, and shot and killed her. “The gunman then removed the police clothing he was wearing at the time, and transferred his weapons to the female victim's vehicle,” said Campbell.

Now in a red Mazda 3, the gunman drove south on Highway 224 towards Enfield. He stopped at the Irving station in Enfield, to fuel up the Mazda.

“While he was at the gas pumps, one of our tactical resources came to the gas station to refuel their vehicle,” said Campbell. The suspect was shot and killed there, at 11:26am, ending the 100-kilometre, 13-hour chase.