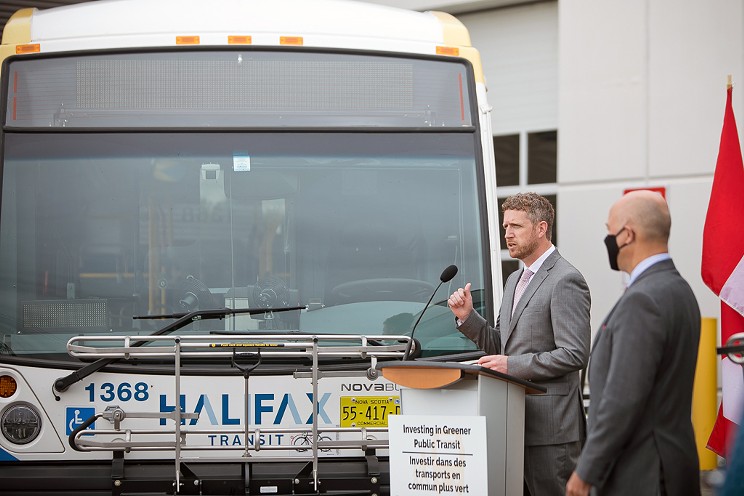 Communications Nova Scotia
Electric buses arrived Thursday, and a provincial election call is sure to follow.

On Friday, which is rumoured to be the day before the election call, Rankin's list of announcements has continued to grow. Since this article was first written Thursday afternoon, the Liberal government in Nova Scotia has announced no less than eight different funding initiatives:

As Rankin tries to please each interest group in the province before the writ drops, the 41st provincial general election seems right around the corner. With an election call rapidly approaching, premier Iain Rankin‘s pre-campaign path has touched on child care, hospital upgrades and now public transit. An agreement between three levels of government will see Halifax Transit get a fleet of 60 electric buses by 2024.

"Expanding Halifax Transit's fleet to include new electric buses will not only improve the capacity of public transit, but it will help us achieve our ambitious climate change goal of reaching carbon neutrality by 2050,” Rankin said in a statement Thursday. The province has promised to cut greenhouse gas emissions to 53 percent below 2005 levels by 2030, then hit carbon neutrality by 2050.

The electric fleet is the first of its kind in development in Atlantic Canada. Once in service, it’s expected to reduce greenhouse gas emissions by 3,800 tonnes a year by 2030.

But this was not the Rankin government’s only announcement Thursday. In the morning the province announced changes to the Alert Ready System which will allow police direct access to sending emergency messages to Nova Scotians. This change follows heavy criticism against the RCMP for its failure to issue an emergency alert during the mass shooting that began in Portapique last year. Prior to this change the provincial emergency management office staff were needed to issue an alert.

NS also announced Thursday morning that public consultation has begun for the Coastal Protection Act (which was passed March 2019). Nova Scotians with concerns about coastal development are invited to share their thoughts on the province’s drafted rules between now and September 17.

In the afternoon the province announced $7.6 million on hospital upgrades—which includes $2.3 million for a new CT scanner and $2.1 million to replace post-anesthesia monitors at the QEII Health Sciences Centre.

All of these announcements follow two massive funding ones from the past week: The $905 million plan to cut daycare costs to $10 a day by 2026, which Rankin unveiled alongside Justin Trudeau Tuesday, and the $96.5 million project to add 124 new long-term care beds by 2027, which was announced July 9.

Rankin acknowledged the spending frenzy briefly during the July 13 announcement for childcare. “I’ve been making a lot of recent (funding) announcements, as many in the media remind me, but it’s hard to beat this one,” he said.

It’s hard to believe the writ hasn’t dropped if you look at Rankin’s Twitter. Wednesday night the premier celebrated his official nomination to run as a candidate in the Timberlea-Prospect riding, where he’s been MLA since 2013.

Politics is about serving your community—and for me, home is Timberlea-Prospect.

Since 2013, I’ve worked hard to make my constituents proud and earn their trust as MLA. That’s the record I’ll be running on as the (now-official!) @LiberalPartyNS candidate in Timberlea-Prospect.

Ahead of the election call Elections Nova Scotia has been issuing daily releases since July 9, when it announced a “pre-election technical briefing” for the media to learn about COVID-safe voting for the 41st provincial general election. In the days since, the non-partisan agency has shared details on early voter registration and how to vote by mail.

“Nova Scotia is the only province in Canada without a fixed election date,” Elections NS pointed out recently, explaining that it has to be ready for an election call any time up to May 2022 (i.e. the legal maximum of five years from the last election). But we’ll be shocked if Rankin doesn’t make the call before August arrives.