Raised by Swans with First Aid Kit, Pink Moth and The Sorrys

Ethereal-sounding indie rock band Raised by Swans brings it to Halifax on its first cross-Canada tour. 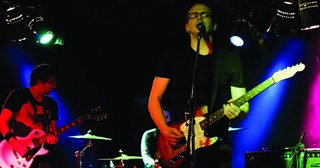 Raised by Swans has been compared to Radiohead, Broken Social Scene, Stars and Stills in the press recently, but the London, Ontario, band’s frontman, Eric Howden, has one thing to say to it all: “We sound most like a plum being dropped onto a gym mat in an empty room.” Plop. The ethereal-sounding indie rock band just released its second and newest album, No Ghostless Place, from which director Atom Egoyan picked two songs for his film Chloe. Asked about his song-writing inspiration, Howden emails with shaky fingers---he’s about to leave for the band’s first cross-Canada show and can’t contain his excitement---“When a melody hits me it’s as random and abrupt as being stung by a bee (which just happened to me the other day, in a Kinko’s of all places).” Get high on Howden’s bee venom with bandmates Alex Wright, Andy Magoffin and Brady Parr at Gus’ Friday.