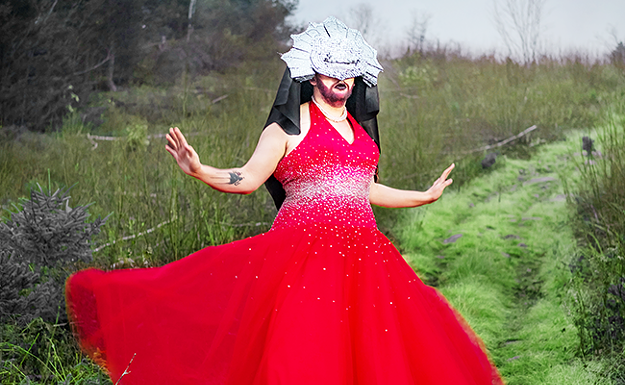 “As a 2-Spirit person, I’ve never really identified as male or female, masculine or feminine roles,” says Brad Jones, “in or out of drag.”

The only 2-Spirit drag performer in Nova Scotia, Jones grew up on-reserve in Garden River First Nation, outside of Sault Ste. Marie, Ontario.

The 28-year-old, who is Anishinaabe, has their creative outlet based on influences as diverse as pre-colonial Indigenous art and Japanese video games.

As a student at the Nova Scotia College of Art and Design, Jones takes the opportunity to use their drag costume creations to delve into Indigenous history, culture and what it means to be 2-Spirit.

“It’s only within the last five years before leaving [Garden River] that I started really becoming proud of my language and working towards that.”

Jones’ initial exploration of art through performance and costume began with 10 years in community theatre, but they continued to struggle with fitting into any . Moving to Halifax over three years ago was the first time they experienced drag.

Six months later, they debuted Jennifer , who has since performed at numerous events including last year’s Halifax Pride Parade.

“I just saw these people who were unapologetically queer walk out and give the middle finger to society and carve out their own space to exist, and I thought that was exactly what I needed—to carve out that space.”

The move to Halifax was a cultural shock, and not just because Jones was no longer surrounded by the Ojibwe language.

“I have received levels of support I never knew existed—not only as a queer person but as an Indigenous person.”

Jones describes physical and online violence they have experienced within their community to those identified as queer, those banned from participating in pow wows and what the non-Indigenous say about Indigenous people.

“If people don’t see the tattoo that I have, they generally assume that I am [non-Indigenous] and they’re free to spout all these racist ideals. I get to hear a lot of what people say behind my back if they don’t know who I am.”

It’s why they’re so appreciative of their parents, who have always been accepting of Jones’ identity, even if they didn’t quite understand. The sudden death of Jones’ father right before moving to Halifax—along with the subsequent anxiety and depression—has also had a profound impact shaping their path and helping the artist come out of their shell.

“It’s sort of instilled in me that understanding that time is limited,” Jones says.

Genderfuck Halifax began four years ago, and was created to many of the expectations in the drag world to present as either hyper-masculine or hyper-feminine, says co-producer Bobby Sparkles.

The work of fellow Anishinaabe 2-Spirit artists such as Grassy Narrows First Nation’s Waawaate Fobister and Halifax’s Raven Davis has also been an inspiration for Jones. Costume making and drag shows allow a creative outlet, just as their experience growing up speaking fluent Ojibwe Anishinaabemowin, lacking any pre-colonial teachings of gender fluidity, has shaped the way Jones introduces their 2-Spirit identity within drag.

“I don’t want to boil it down to the romantic notion that everyone has a male and female spirit because the world is much more complicated than that,” Jones says. “That’s where drag came in.”

The term 2-Spirit was introduced into the LGBTQ+ acronym in 1990 as an Indigenous umbrella term.

It’s not a new idea, but has seen a resurgence in cultures lost to colonization and the legacy of residential schools, says John R. Sylliboy, Mi’kmaq health consultant and co-founder of the Wabanaki 2-Spirit Alliance.

“It’s not linear,” he says. “We look at the world in a very circular fashion, in a continuum like the medicine wheel, that symbolic representation that life moves in that cyclic motion.”

“There are a lot of traditionalists who have integrated a lot of patriarchal beliefs, more than likely from a Euro-centric worldview, around certain expected gendered roles,” he says.

Being 2-Spirit has always been a process towards self-acceptance, says Jones. It’s why people from other Indigenous nations are often so appreciative of Jennifer DaFuque’s performances.

“They are just grateful to be represented on stage, in these queer spaces, because so often we get pushed to the outskirts.”

Jones says the costume making and shows reflect what they are feeling at the time. For a show in early April, Jones wore a mask and silk-screened, blood-splattered dress alongside video projections and music from Tanya Tagaq and A Tribe Called Red. The dress included Jones’ status card number.

“Examining those identity markers is very much based in genetics and histories inherited that we have no control over,” Jones says.

One of the most noticeable aspects of their drag costumes is the unique creation of masks. Jones says the masks offer the ability to assume different identities and increase the suspension of disbelief.

“A lot of drag is focused on this idea of transformation, but I wanted to have a beard and a bald head and not wear a wig.”

The creativity has not gone unrecognized, with Jones earning the pageant title Genderfuck Supreme last fall.

Jones “is 100 unapologetically political and powerful in their performances,” says Sparkles. “Each and every time they perform it’s about something real and  meaningful.”

Jones will again be participating in Halifax Pride this year, including the Genderfuck show on July 22 and the Gottingen Street Block Party on July 28.

Those performances, like past drag shows, allow Jones to find their voice and carve out space for other queer Indigenous lives in a world that’s not always welcoming.

The struggle to adapt to that world has instilled what Jones calls a “radical softness.”

“To be gentle, to be kind, to be aware of people’s histories,” they say. “But to be radical and unapologetic on how you are presenting. I found out it gives other people permission to do the same.”


Karli Zschogner is a University of King’s College journalism grad with family in Nova Scotia.