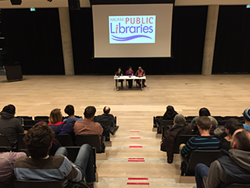 The Radical Imagination Project has screened films and hosted discussions about radical ideas that emerge from social change and movements at the Halifax Central Library for the past four-and-a-half years.

But it won't be returning this fall, according to Alex Khasnabish, director of the project and professor of sociology and anthropology at Mount Saint Vincent University.

"I had three films scheduled for September and October, two of which were about police violence, alternatives to policing, the militarization of policing and racial profiling," he says. "They give me the available dates and the rooms. I provide them with the titles of the films, a brief synopsis and we're off to the races."

The Radical Imagination Project has held events at the library since July 2015 on everything from the climate crisis to Indigenous resistance to women organizing against sexual violence. "It encourages people to have difficult discussions about important issues," says Khasnabish. "Get people thinking and discussing together as a way to move forward on some of these issues."

In the past, the library has sponsored the events, which means it provides the space, a staff member and promotion free of charge. On June 23, after the fall details had already been firmed up, the Radical Imagination Project received an email from the library.

"It was from the programming manager," says Khasnabish. "Stating that if it was going to continue, I would have to consent to having a representative of the Halifax police department as a featured speaker at both of the film screenings."

The films in question are Profiled, which focuses on police brutality and racial profiling in New York City, and episode 18 of the Trouble series by subMedia, called ACAB—all cops are bastards—which examines alternatives to policing. The third film, Golden Dawn: A Personal Affair, about a far-right political party in Greece, wasn't mentioned.

On June 27, the library released a statement confirming it recommended a representative of HRP or the municipality be "invited to join the conversation as part of the presentation."

"The Library and The Radical Imagination Project were unable to reach a mutual agreement, as this recommendation was not included in the finalized program outline," the statement reads.

Khasnabish feels having a police officer at the event would make some attendees uncomfortable. "There's a lot of fear of the police, especially from marginalized communities," he says. "There's a significant portion of my audience who would not show up if they knew that there was going to be a uniformed police officer in the room as a featured speaker."

Khasnabish says this is the first time the library has had an issue with his programming.

"Nobody suggested I have lobbyists from the fossil fuel industry when I showed This Changes Everything, about the climate emergency," says Khasnabish. "Nobody said I should have a men's rights activist group in when I showed a film about women organizing against male violence."

He thinks one of the reasons these films are an issue is because policing is a hot topic in Halifax right now. In March, the Nova Scotia Human Rights Commission and Scot Wortley released their highly anticipated report on street checks, which found that Black people in Halifax were six times more likely to be stopped by police.

"They're aware of the bad press around the street checks issue, the armoured vehicle purchase," he says. "I understand that powerful institutions are concerned about that and they aught to be. But I'm not giving them a platform."

The Radical Imagination Project is no longer in talks with the library, but in the past week, Khasnabish has had plenty of suggestions of where to take the series next. "Right now my fingers are crossed for the Khyber," he says. "It's not as big as some rooms in the library, but it would be an amazing space to hold the series in.

"This is not the end. If I have to hold it in my basement, the series will keep going."