“We’re trying to cater to the people that just want to have their own little spot.”

Growing up in the United Kingdom, Poole Thomas (better known as Tommy) remembers always being surrounded by pubs. England and Wales were—and still are—dotted with taverns on nearly every street corner, even in residential districts. That aspect of Tommy’s homeland is something he adores, and it’s a facet he’s actively trying to bring to Halifax.

He’s the owner of Quinn’s Arms, a brand-new British-style gastropub in the old Phil’s Seafood location on Quinpool Road. It’s a cozy place: the walls are covered in dark wood panelling and plum-coloured wallpaper, there are only 60 seats and the lighting is sparse. But that’s exactly the style Tommy wanted to achieve.

“You create an atmosphere,” he says. “You get 10, 15 people and you already kind of have an atmosphere. It’s just what I’m used to growing up.” 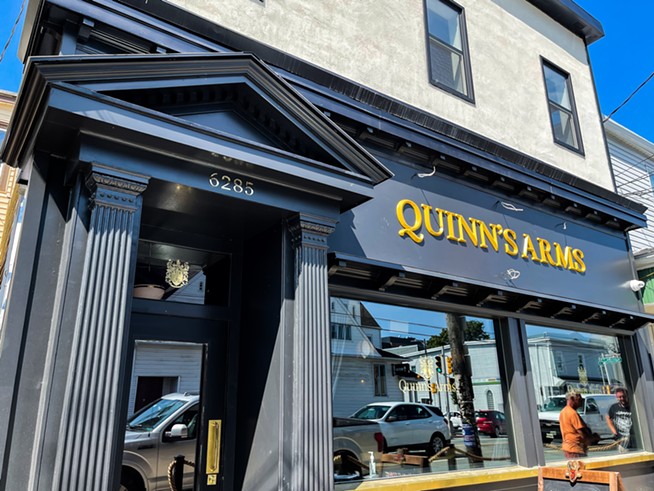 Tommy has been in Halifax for roughly 10 years. He’s one of the partners at The Brown Hound Public House, which has an Agricola Street location and a newly opened spot behind The Alexander building in downtown Halifax. With Quinn’s Arms he’s deliberately avoiding the heart of the city’s bar scene.

“Not everyone wants to go into the city downtown,” he says. “We’re trying to cater to the people that just want to have their own little spot outside of the main hub.”

It’s also his goal to bring something new to Halifax. For one, he decided to avoid the brunch train and offer a weekly traditional Sunday roast with offerings such as prime rib, potatoes, vegetables, Yorkshire pudding and the option to add pork or duck.

There’s a focus on classic dishes at Quinn’s Arms, but Tommy and head chef James Millar aim to elevate each one. While the menu offers classic British dishes such as fish and chips, hot beef sandwiches and clam chowder, there’s also an influence of Indian cuisine with a spicy lamb vindaloo curry and another curry featuring pulled butter chicken.

“Quintessentially, it’s always going to be a pub,” Tommy says. “With the food, we’re just trying a bit of a new thing with the British classics of just keeping it a little bit more modern.”

Quinn’s Arms has been open for nearly two weeks. There have been some steady evenings, but the pub still has to straighten out a few kinks. The pub currently closes on Mondays and Tuesdays, but Tommy would like to see it open seven days a week.

First look at Propeller Brewing's Quinpool Road tap room: Six months ago the west end was a craft-beer desert, but now it's getting its second brewery.

Moreover, the menu heavily focuses on meat-based dishes with only two salad options for non-meat eaters. Tommy says he’s going to work on improving the menu and aim to add more plant-based options to cater to all customers. The public’s feedback is something he appreciates as a restaurateur.

Like many business owners, change is something that Tommy embraces. For years, Quinpool Road has lacked a proper pub and a variety of lounge-style businesses. But that’s something Tommy hopes will change in the near future.

“This road is just going to be changing rapidly,” he says. “With what’s going on with the construction and the new condos and apartments going in, we’re really looking to try, and hope that this will be a good spot.”