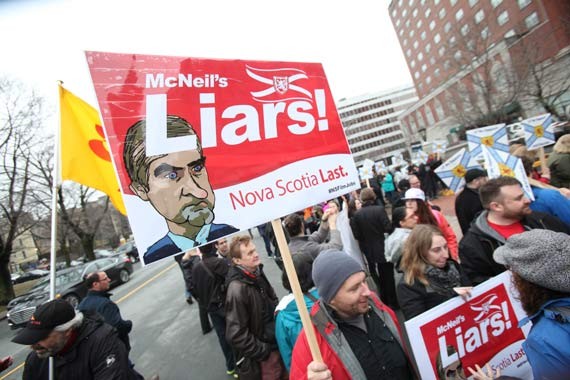 Mark Furey speaks with conviction about the bright future of movie-making in Nova Scotia. "The film and television incentive fund is here to stay," says the provincial business minister. And you've gotta believe he believes it.

Last April, after the Liberal budget killed the film funding program that had been luring major productions to the province for years, Furey joined premier Stephen McNeil as the faces of the #NSFilmJobs disaster. Backed by its army of skilled workers, an entire media industry waged a public relations campaign against the Liberals, successfully casting McNeil and Furey and villain and stooge, shortsighted outsiders who don't understand Hollywood financing. A massive demonstration was held; a flurry of media articles, press releases and educational videos were created; an exhaustive study was commissioned.

A year later, the storm of outrage has mostly passed. Rather than protest at home, many film-industry workers have left the province for work. And Furey is touting a new funding program—an incentive fund capped at $10 million—to replace the old tax credit system which, in Liberal spin, was an untenable $24 million cost that McNeil responsibly vanquished.

With no sign of egg remaining on his face, today Furey is a film industry booster. "Thirteen productions have been approved through the fund since July 1," he says, "a strong indicator that it is working."

"The incentive fund is working, but not well," says Marc Almon of Screen Nova Scotia. He says the fund's relatively small $10 million capacity, along with a lack of confidence in the province's ability to administer it, does not encourage foreign productions to come to the province.

The 13 productions Furey points to are using less than $3 million of the fund. That's an average of around $225,000 per project, with the latest Trailer Park Boys joint the biggest production, using just over $810,000. Gone are the days of big-budget films and TV shows like Lizzie Borden, Moby Dick and Tom Selleck's many Jesse Stone movies choosing Nova Scotia over other film centres.

A quick look at the "What's Shooting" section of the ACTRA Maritimes website is a good indication of the current climate: This Hour Has 22 Minutes is the sole item on the list, and it wrapped at the end of March.

Still, the Liberals are convinced, insofar as they keep repeating themselves, that they've made reasonable accommodations and compromises for the movie business.

"There have been some good steps taken by industry and government," says Furey.

But the simple reality is that Nova Scotia is no longer a viable place to make films.

The public perception of the province's industry, along with very real fact of having lost much of the local workforce, has been a deterrent to big productions that can easily film elsewhere. In the end, it's only Nova Scotians who are willing to make the sacrifices that come with staying to work in the province.

The previous tax credit was put in place in 1995, and grew steadily alongside Nova Scotia's film industry. By 2010, the credit guaranteed productions a return of 50 to 65 percent of labour costs for hiring Nova Scotians. Before any other funding was in place, producers could use this guaranteed return as a bargaining tool to secure outside funding. They could literally take it to the bank.

The new Film and Television Production Incentive Fund has no such guarantee. While funding is now available for more than just labour costs, productions must have an application approved by Nova Scotia Business Inc. before they can approach investors to leverage any provincial funding promise. The previous tax credit was unlimited insofar as whatever a production spent on local labour would be eligible for the rebate, while competing for part of the new $10 million fund has much less appeal for big investors.

Being new, the fund lacks useful precedents for what applications get approval, and early applicants reported that it took 13 weeks of delays to receive a verdict from NSBI—two factors that undermined confidence in the fund and made it easier for investors to look elsewhere. Although eight months in, minister Furey is sure the kinks have been worked out at NSBI's end.

“If we want the film industry to thrive in Nova Scotia we have to think positive within government and within industry.” —business minister Mark Furey

"The average time from point of complete application to approval is two to three weeks," he says. "That is an acceptable period of time."

Alberta has a successful incentive fund in place for productions in its province, quite similar to Nova Scotia's new model. The Liberals refer to Alberta's success when doubts are cast over the ability for a similar structure to work here.

But Alberta isn't trying to start from scratch. Its film industry thrives, in no small part, because of the government's past success in administering their incentive fund, a history marked by flexibility and a willingness to break through the funding cap.

"In Alberta, they have been using it for a long time and have built up credibility," says Almon. "When necessary they can turn the applications around quickly, and they are able to say they have never turned away an eligible project. In the past they've requested more money from the treasury board and that has resulted in a booming film industry. It will be difficult to establish the same thing in Nova Scotia with what happened.

"The key thing for us is to be able to ensure that projects that want to shoot here and are eligible can feel confident that they can be supported by the incentive fund. That is up in the air right now because there is a limited amount of money in the fund. We want to make sure there is money available if the industry is booming. We want to know it can expand."

Raising the cap from $10 million, the way Alberta does, isn't talked about in Nova Scotia, and there's certainly no process in place for a production to request an increase.

As the Liberals see it, the previous tax credit was scarily open-ended, based on demand and growth of the industry. To them, a bigger credit isn't a sign of more money coming into the province, it's a growing cost we can no longer afford.

How government film rebates translate to new provincial income is a matter of debate, as is the decline in Nova Scotia's film industry. The Directors Guild of Canada says business is down fully 50 percent under the new incentive regime, according to the amount of work its local members are getting.

This Hour Has 22 Minutes is the sole item on the ACTRA Maritimes “What’s Shooting” list, and it wrapped at the end of March.

To be fair, that drop can't all be blamed on the Liberals. For instance, the Chester-based show Haven was cancelled by the SyFy network, without intervention from McNeil and Furey.

But they are doubtless responsible for a huge part of the slump.

"This reduction in days worked and gross salaries paid to our members reflects how ineffective the new production incentive fund has been in attracting productions to Nova Scotia," says DGC Atlantic chair Jennifer Stewart. "Local producers are having great difficulty securing investment funding. Meanwhile, every other jurisdiction in Canada is experiencing record production levels."

But the Nova Scotia Liberals are standing on the virtue of living within your means, not trying to keep up with flashy spending in other provinces. "In government budget processes," explains Furey, "for every service that the budget provides, there is a limit to how much is allotted to any service or sector."

In response, Almon points to that exhaustive study Screen Nova Scotia commissioned from Price Waterhouse Cooper. Although the study hasn't been made public yet, Almon claims it indicates "for every dollar the government invests, six dollars are invested in the province." Meaning that cutting the film tax credit isn't a major savings for Nova Scotia, but the dismantling of a $144 million industry that only cost us $24 million.

Still, the government shows no indication of reconsidering its position. Especially when, for all the noise the industry made a year ago, there hasn't been enough film activity to put a dent in the new fund.

"The former tax credit," says Furey, "the government could not afford. And I would have a hard time explaining to Nova Scotians that we've created a new budget line when there is still money that remains."

Recently Furey made a public plea for the industry to use the incentive fund, suggesting that the $7 million remaining balance is an indication that no changes need to be made except by the industry. More media articles and industry press releases followed, attempting to make clear the nuances of the situation.

Last week, the Department of Business released a statement that "an important point of clarification" would be announced. Reporters gathered with microphones and cameras.

"There is no announcement," Furey said, confounding gathered journalists. "I've said that before, nothing has changed."

A year after the Liberal budget announcement, it still seems like government and the film industry are having two very separate conversations. And if the success of the new funding model is based on investors' confidence in its ability to be viable, the Liberal government has done a bad job of appearing to know what they're doing.

The way forward is still uncertain. Both Furey and Screen Nova Scotia are hopeful that a resurgence in film and television production in the province is possible. The important difference is that the government refuses to acknowledge the level of success the industry achieved before the previous tax credit was eliminated.

In essence, the Liberal government broke the province's film industry, now they demand the trust of Nova Scotians as they attempt to repair what was lost.

“There is no announcement,” business minister Mark Furey told the journalists. “I’ve said that before, nothing has changed.”

"I believe we will see a resurgence of film productions in Nova Scotia," says Furey. "Probably the most important piece is around restoring confidence in the film industry in Nova Scotia. It's important to change the discussion and be optimistic instead of pessimistic. There are those in the industry that are trying hard, but some are opposed to this approach. If we want the film industry to thrive in Nova Scotia we have to think positive within government and within industry."

Positive thinking, however, is not enough to keep industry workers from leaving the province to find jobs.

"We need enough money coming in to support a significant work base," says Almon. "Nova Scotia had 52 nominations for the Canadian Screen Awards this year, and the projects that we've produced are seen by hundreds of millions of people around the world. But we need to have a robust crew and cast network to keep that going."

"There is an enormous possibility for huge productions in Nova Scotia," says Furey. But since the new incentive fund was put in place, those productions have gone elsewhere.

Governments and politicians have never been good at admitting mistakes, and the Nova Scotia Liberals are no exception. The leaders of our province will continue to insist on our blind optimism as they turn off the lights.

Michael Lake is a writer living in Musquodoboit Harbour.