James Cowan has some explaining to do, say residents and former Environment minister. 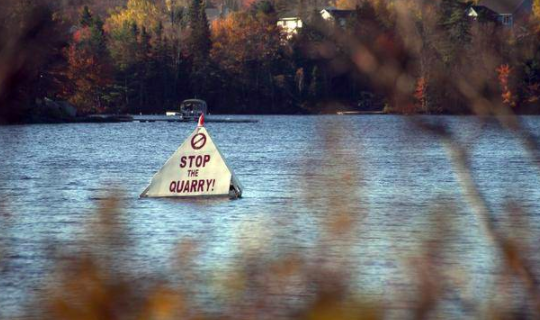 FROM STOP THE FALL RIVER QUARRY
Opponents of the Fall River quarry are wondering why the Halifax International Airport Authority (HIAA) withdrew its appeal of the contentious project, and what role a former senator made that decision.

James Cowan served Nova Scotia in the senate from 2005 until his retirement this year. He also has an association with HIAA. As stated on the HIAA website, “Upon his appointment to the Senate in March of 2005, Jim resigned from the Airport Authority Board but continues as Secretary, a position that he has held since 1995.”

He’s also part of an advisory board for Scotian Materials, the proponent behind the proposed four-hectare quarry in Fall River, just a few kilometres from the airport.

Stacey Rudderham, who lives near the proposed quarry site, says she and her neighbours were left confused when the HIAA initially opposed the quarry, then withdrew their appeal of the project last spring.

“They were one of five parties to appeal,” she says, “because they were concerned about the risks [to air traffic] of fly-rock, which can fly several kilometres, and dust, which forms blooms 500 to 700 feet above .”

But the HIAA says it withdrew the appeal because it was assured that air traffic safety would not be compromised. According to spokesperson Ashley Gallant, “An operational agreement was reached last summer between the proposed quarry operator and NAV Canada, the agency that owns and operates Canada’s civil air navigation service. The agreement provides assurances to HIAA that the quarry operations will not in any way affect the operations of Halifax Stanfield and provides for the safe operation of the quarry relative to Halifax Stanfield operations.”

The quarry project was initially approved by Nova Scotia Environment staff in September and subsequently rejected by MLA Andrew Younger—who was of Environment at the time. Its future is currently in limbo.

“The real concern is of transparency,” says Younger. “Maybe it makes sense to have an airport person advising you a project close to the airport, but [Cowan’s appointment to Scotian Materials advisory board] has not been proactively disclosed. Did the airport authority approve this? Were they aware of it?”

He adds that the three parties—HIAA, Scotian Materials and NAV Canada—could be more forthcoming about their agreement and assessment of the risks to air traffic.

“We don’t know why they withdrew their appeal. They seemed quite concerned. HIAA didn’t say what was in the agreement or why they were satisfied.”

Gallant says any questions about Cowan’s conflict of interest should be directed to the former senator, who did not comment.

Meanwhile, the reason Younger overturned his environment staff’s approval of the project—insufficient public consultation by the proponent—hasn’t been resolved. Residents and Younger originally learned about the proposal’s approval from the media.

“Nobody knew it was approved except the proponent,” says Younger. “There were appeals from Indigenous communities. There were other grounds that could have been considered for rejecting the proposal, but they became moot once it was clear there wasn’t proper public consultation.”

Company president Robert MacPherson says Scotian Materials has addressed this concern with an “unprecedented public consultation program [that] included extending an opportunity for local residents to join a community liaison committee, newspaper advertisements, responding to written submissions from the public, a dedicated website with information on the project at scotianmaterials.info, ongoing responses to other public enquiries, a two-day open house in January 2016 with project information and company representatives available for questions and opportunity for written submissions.”

But Rudderham says the community has been left in the dark and its safety and environmental concerns have not been addressed. “We’re in limbo,” she says, that the company has considered the project’s impact on community and environment. Of the latter, she notes that the proposed quarry site is 160 metres away from a high-pressure gas pipeline.

“Every time they choose to blast we’ll have to watch from a distance and see if [our homes] blow up.”

The company says there is no such risk.

“We have been in contact with Maritimes and Northeast Pipeline officials and have provided them with all our proposed blasting information. They have reviewed and advised that our operation does not propose any risk to the pipeline,” says MacPherson.