Gabe "Squalor" David is making a permanent mark on the lives of queer folk in Halifax. 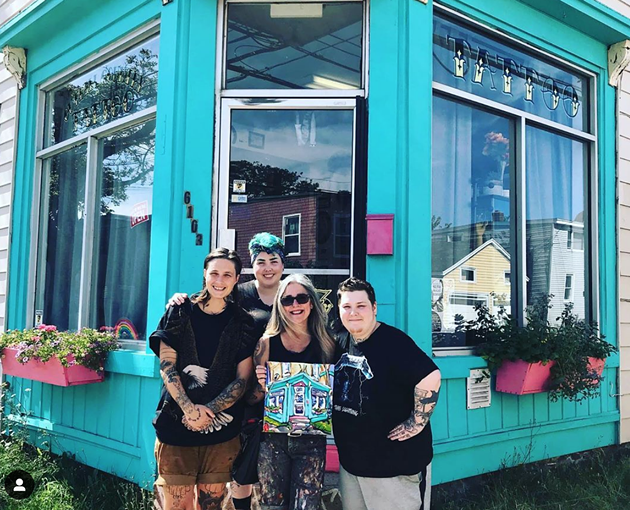 instagram
Outlaw Tatttoo adds a pop of colour to North Street with its bright teal shopfront.
Whether it was drawing, writing, or playing an instrument, Gabe “Squalor” David has been expressing herself creatively for a long time.

With a passion for art spanning more than a decade, David and her art finally found a permanent place—literally—to call home at Outlaw Country Tattoo Co. in October 2018.

Despite being open for less than two years, David has been responsible for needling her precise line work and bold designs onto the skin of hundreds of Haligonians.

But for David, who also plays guitar in local indie rock band Holy Crow, it’s not about fame.

In her six years of working for other people, David says there were many times she was told by a tattoo shop to pack up her stuff and leave without reason.

"I knew there wasn’t really any queer safe spaces in tattooing, and so I knew that I would only last so long jumping shop to shop and trying to make it work,” she says. “So every little extra bit of money I was saving up just in case I couldn’t find the next shop to be at.”

Eventually, David grew tired of shop-hopping and decided to open her own shop at 6103 North Street.

“Fortunately, we had people care enough about what we were doing to just give us just a tiny bit of money. A lot of shops and businesses open with something like thirty grand but we did it with like ten grand. I happened to save up a lot of money myself, from working at other places,” says David.

David and her longtime friend and roommate Tucker Bottomley run the shop together, with the goal of creating a workspace that’s more than just a job. Outlaw hires other 2SLGBTQ+ artists who may not fit in elsewhere and takes on apprentices who are just starting out. 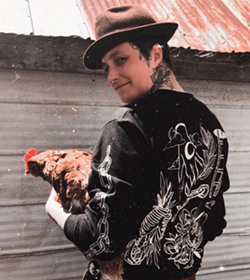 instagram
Gabe David, co-founder of Outlaw Tatttoo, also spends her days playing banjo and caring for her chickens.
“We’re creating a space together and operating it together,” says David. “Everybody has needs. I definitely wanted to create a space for a long time and I definitely wanted to do this and teach other queer people,” she adds.

Going from a self-described “crust punk” to an established business owner (who’s still punk as heck) is no easy feat, and David says she’s still learning every day.

“As much as I wanted to be the cool boss, I realized once I started off in the studio...the cool boss is a problematic figure,” says David. “It’s been a tricky journey learning how to balance wanting to be everybody’s friend but understanding I can’t always be,” she adds.

In terms of the future, David says Outlaw plans to stay open as long as they’re able. “It would be one thing if this was just a fun adventure but it’s our livelihood,” she says.

For now, the shop is doing well even during COVID, and David has high hopes for the next few years. “I had seen a lot of queer tattoo shops pop up in major cities and I don’t think our town is too small for that,” says David.

The tattoo artist sees herself as an example of what happens when you turn your passion into a job. Above also else, David has made a permanent mark on the lives of so many queer folk and otherwise.

“I do get a lot of love and appreciation from the community,” she says. “Which I’m so friggin’ grateful for.”