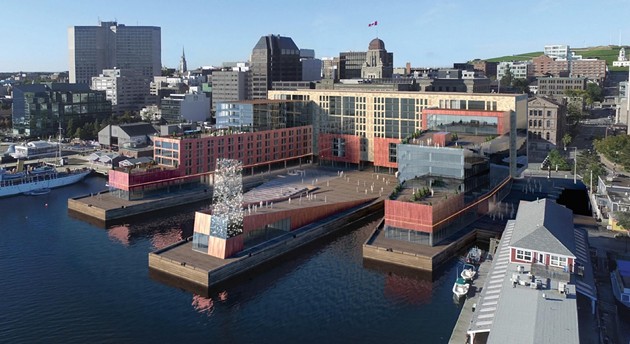 “I have to resist the urge to gush,” said DRC member Anna Sampson John Crace about the preliminary designs.

The $200-million, five-acre project is a mix of four residential and commercial buildings to be constructed in what’s currently a parking lot between Prince Street and George Street.

The right “pier” will be commercial, while the left will be a boutique hotel. The mid-rise sandstone building joining them will be a mix of commercial space and apartments (not condos, McCrea said). Retail space will make up the lower levels, with corridors running through the “piers” to allow easy access to the public square between the buildings. 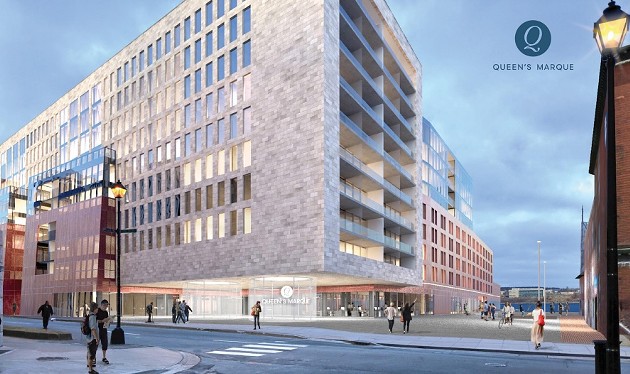 Capping off the design is a sloped commercial space/public ramp dubbed “Rise Again” (after either The Rankins or Stan Rogers, depending on your preference) and a set of granite steps leading down into the harbour. McCrea said the stairway into the ocean will be reminiscent of the rocks of Peggy's Cove, but without all the danger.

According to McCrea, the shapes and building materials are all meant to evoke the waterfront’s merchant marine past through subconscious coding. The development's psycho-geography will apparently use sandstone, copper and granite to sublimate a dreadful pride into Halifax’s wistful soul.

“This is not a building,” said designer Brian MacKay-Lyons, of MacKay-Lyons Sweetapple Architects. “This is a piece of a city.”

All the materials, tenants, art, furnishings and designers are being sourced locally, said MacKay-Lyons, as an example of what he calls “locavore architecture.”

“We hear the word ‘iconic’ all the time. We actually think, in the Maritimes, modesty is important,” the architect said about the $200-million, five acre development. “It’s monumentally modest.”

While design committee member Crace praised Armour’s proposal, he also felt the development could better evoke the waterfront’s burly past.

“I think there’s opportunities to kind of rough and tumble it, without taking anything away from this amazing and visionary piece.” 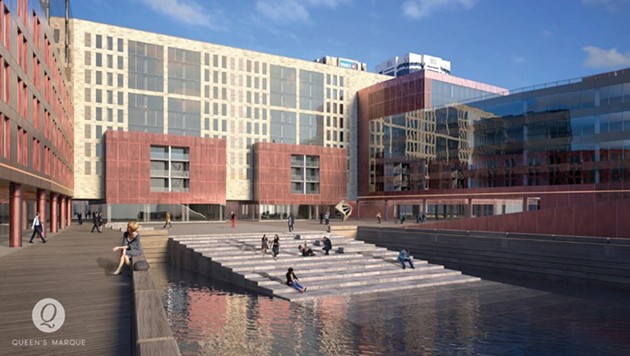 One element that remains to be conceptualized is the “Harbour Light” public art piece at the end of the “Rise Again” wharf. McCrea said his team is still working to determine what that structure will look like, but that it will be “a true art piece...that might be a future postcard of Nova Scotia.” He compared it conceptually to Cloud Gate in Chicago, or the inside of the MIT chapel. What it won't be, he says, is some “kitschy lighthouse.”

Below ground, the development will house up to 300 parking spots contained in a copper “bathtub” under the water. Anywhere from 100 to 200 of those spaces will be public, McCrea said. There are 160 public parking spots on the site now. Also, because there’s no “backdoor” to the building, dumpsters for the buildings will be housed, cooled and compressed underground.

Above ground, McCrea said Armour’s been using data from the Bedford Institute of Oceanography to predict how high sea levels will rise in the next 100 years to plan the complex’s elevation. Right now, the design of Queen’s Marque will be two feet higher at its base than neighbouring properties (achieved through a gradual boardwalk elevation), but McCrea said it may yet have to go higher.

If given the go ahead by the design committee and HRM Regional Council, McCrea estimates Armour could begin construction on Queen’s Marque in October, to be completed in 2019. 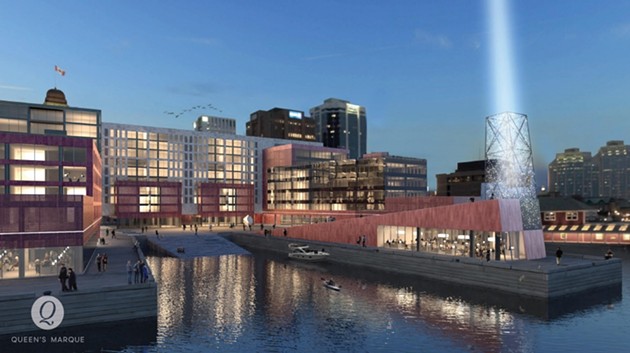