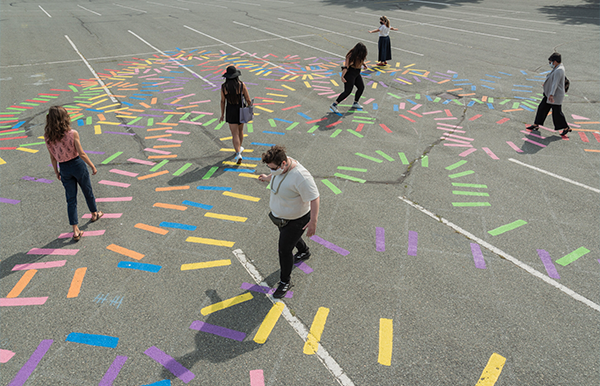 “I’m finding myself still very interested in making stuff outside of exhibition spaces.”

Lou Sheppard is the sort of artist whose works break open the binaries in your brain. Mixing installation, audio and performance art, they remove the rubric you see the world through. Instead, taking in a Sheppard work is an exercise in working through what their artist's statement describes as "acts of queer attention."

"I feel like I'm tired of this idea that art—I mean it's an old conversation—but like, just the idea that art is not for everybody or that it can't be something that everybody can engage with," Sheppard tells The Coast one morning recently, speaking from their front porch on IGTV. "I don’t think my work has to be opaque or difficult to enter into."

Clearly they're onto something. Not only has Sheppard shown works in locales as far-flung as Paris and Moscow, but as of last week's announcement of the Sobey Art Award longlist, they’ve been nominated for the prestigious award three years in a row. (For those unfamiliar, the Sobey is the biggest visual art prize in Canada.)

Here, we catch up with the artist on creativity in the time of COVID, how it feels to be in the running for the Oscars of Canadian art and more. (Bonus points: You can watch the interview on our Instagram, too.)

The Coast: How does it feel to be Sobey longlisted again?
Tell us a little bit about the work you're nominated for.

Lou Sheppard SAMSON PHOTOGRAPHY
Lou Sheppard: Yeah, it's such an honour to be on the list. It's interesting, when you're saying that it's like the Oscars of Canadian artists, like, it's true. And then also, it's like, awards are so funny: What does it mean to be in competition with people that also are your colleagues and your friends and your peers?

But for me, especially, this is my third time making the list, and it really just is a call to keep working and to keep doing what I'm doing and an affirmation that what I'm doing is resonating with people. And that feels so good. I think there has been some really interesting conversations about what the award means. Last year, I was really lucky to be one of the 25 artists that was given $25,000 as part of the list—because instead of having this intense, year-long awards thing that they do, where they do like a show with the National Gallery residencies and they do all kinds of stuff, they just gave everybody $25,000. Which is a really amazing move. And really forward thinking in terms of the Sobey family, so that felt like a real shift in the award, in terms of like what they're actually trying to do with it.

I think a lot of us are struggling with this idea of what does it mean to be an essential worker and recognizing that, for me, I'm not out in the grocery store, I'm not in the hospital. And I used to work in education and seeing my classmates, and colleagues working through schools: It's so intense to watch what people are having to do. And what does it mean then to be an artist in this time? So I think, for me, there's also just the sense of urgency, or like, recognizing that what I need to do is quite urgent, in terms of how I use my practice and how I share my work. It’s a heavy time.

I work full time as an artist, which is a pretty rare privilege. So I basically live kind of grant to grant or residency to residency. And so, I was in a residency at the time when the pandemic started and it was supposed to be a residency working with the public, community members. And I was really ready to get into a community and be working with people, and that of course has been shifted. We had to shift all of the programming online, and figure out how to activate and research and reach out to communities in ways that weren't about public space.

So, I did a piece that was dance notation that was painted in a parking lot in Richmond, BC, which is where I was. And it took people through a dance that was about social distancing. So basically, seven people could follow these social distancing notations and they would never bump into each other, but they'd always be held just outside of two meters of each other. So things like that. And I did this piece where I was looking at lost waterways through the city and creating a series of walking trails that people could follow on their own based on the lost waterways. So projects like that, then people could access them outdoors, and kind of chip away at this idea that art has to be seen in a gallery or a museum or that it has to kind of have this padding around it.

And so that really changed the way I thought about work. And it changed the kind of accessibility that I thought about in my work. And it definitely made me want to [make work that’s] more immediate to fall into. So, those are things that I'm still wrapping my head around and like kind of getting through. But now things are changing back and there's like opportunities to have stuff indoors again, which is interesting.

And actually, I'm finding myself still very interested in making stuff outside of exhibition spaces and museums. That's where my brain is going, and so we'll see how it continues.

I love that. I love the idea of someone showing up to this parking lot and not expecting to find your artwork there and then engaging with it.

Yeah, I feel like I'm tired of this idea that art—I mean it's an old conversation—but like, just the idea that art is not for everybody or that it can't be something that everybody can engage with. I don’t think my work has to be opaque or difficult to enter into.

I really want it to be something that can be accessible for whomever wants to approach it.

Recently I wrote a piece about how Halifax needs more public art and I named five local artists—including you—who should get an installation. What kind of public art would you like to see in Halifax?

There's a lot of public art in Halifax that I don't think speaks to our communities anymore, or I don't see necessarily how it is related in the same way. I think a lot about this idea of monuments and everything that's celebrating the history that's maybe not a history that we want to celebrate anymore in Halifax. And so when I saw that list from you, everyone in it—including myself [laughs]: Speaking from experiences deep from these communities would be so incredible. So, I would love that. If we all got to make work, that would be amazing!

This interview has been edited for length and clarity.