Q&A with Jake "The Snake" Roberts

Roberts slithers into the city on his comedy tour this Thursday 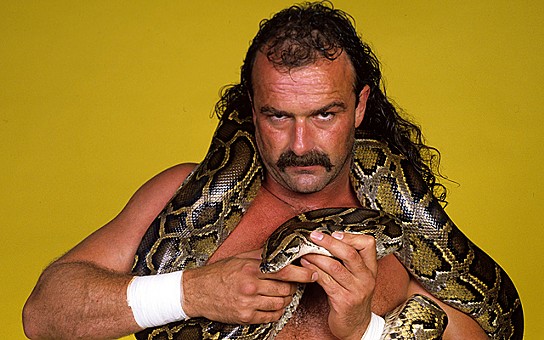 
In the history of professional wrestling, no man inspired more fear in his opponents than Jake “The Snake” Roberts. At 6-feet 6-inches tall, Roberts wreaked havoc on Andre the Giant, Macho Man Randy Savage, Ultimate Warrior and every wrestler in his path with his chilling laugh and deadly python, Damien. After almost 30 years in the ring, Roberts entered semi-retirement and turned his focus to healthy living, documentary films and more recently, his own stage-show, UnSpokenWord. The WWE Hall of Famer will perform his comedic stage set on Thursday at The Toothy Moose.

Tell me about UnSpoken Word. I heard it’s a mix of road stories, wrestling tales, strippers and everything in between.

What else is there to tell? You hit it on the head. It’s stuff from the road. A whole lot of (Jim the Hacksaw) Duggan, some Andre (the Giant), Macho Man. Stuff you haven’t heard about.

Wrestling is such a performance. Did that prepare you for live comedy?

Of course. The great thing about wrestling is there’s only one take. No rewind. You have one run. It helps if something funny happened to you, too.

How much of your stage show is improvised?

I have my standards that I go to, but a lot of it is off the cuff, kind of seeing what the fans want, trying to quench their thirst.

You were in Halifax this summer to talk to the students at Wildman Wrestling Academy. Do you have any tips for beginner wrestlers?

Jake THE SNAKE wrestling tip: FIND A GREAT TEACHER. There are a lot of schools that are NOT qualified.

This year your autobiographical doc, The Resurrection of Jake the Snake Roberts, premiered at Slamdance. Do you expect a wide release?

It just finished the Portland Film Festival and it’s starting to premiere in select cities, then world-wide. Check out my twitter @JakeSnakeDDT or @JakeSnakeMovie for more information.

What was your favourite wrestling moment?

A book (one of three), the movie, UnSpokenWord, and a HUGE announcement in November that will shock the wrestling world.