Q&A: How one independent Halifax theatre company took its show on the road—and had the best summer ever.

The outdoor, musical show Hippoposthumous returns to HRM this weekend after a month touring Nova Scotia.

Not to be that person who quotes themselves, but when I saw the spectacularly strange play Hippoposthumous at the 2021 Fringe Festival, here’s how I explained the one-actor show unfolding before me in a hidden pond at Point Pleasant Park: “There are maybe a handful of times in your whole life when Pablo Escobar and God get to share a sentence, placeholders of equal weight in their respective creation myths—and the Halifax Fringe Show Hippoposthumous is one of them. A play examining the meaning of belonging through the lens of invasive species—particularly, the hippos now inhabiting the Magdalena river valley of Colombia, a non-native species Escobar unwittingly introduced to the ecosystem when he brought two to his estate—it’s a one-hippo show looking for home.”

In the role of the aforementioned hippo, actor Katherine Norris is tasked with not only regaling the crowd, but with building a world—without props or costume, while standing knee-deep in water. The physical environment is her only supporting actor. The show became such a smash it was one of five shows at last year’s fest to win the Fringe Hit award.

This summer, Norris (who grew up in Dartmouth) has re-donned her hip waders to reprise the role as the play toured the mainland of the province, making pit stops for performances in the Valley and on the south shore—before returning to HRM for two shows at Shubie Park at 7:30pm on August 19 and 20, along with an encore showing in Chester on September 9. Show writer and director Login Robins “emailed and called anybody with a park, anybody with a theatre that would be willing to have us. And we created this really fun tour over this past month. I've gotten to go more places this summer than I have ever been any summer,” Norris tells The Coast, speaking by phone. “I was kind of scared to start the tour because you never know: Like, we're not backed by any big theatre company. Sometimes nobody will show up. But we've always made the best of it. And we've performed in front of six people. We've performed in front of 90 people. I've never regretted a single performance.”

Here, we asked the actor about the play’s reprise, taking theatre on the road and more.

The Coast: How has the show changed since Fringe last year?

Katherine Norris: We kind of know or believe more about the show: Because, yes, it’s about a hippo who never felt like they belong. They're an invasive species. But then, I don’t know if you’ve felt like this too, but, humans have felt a bit like invasive species, as well. And we’re trying to touch on colonization a little bit more.

So the show has become not just about symbols, but, like: Being in that spot where you know that you are the problem, but you don't know what to do about it. I don't find that Hippoposthumous is shoving it down anyone's throat, saying ‘you are the problem’ or anything like that. But it's just kind of saying: ‘Hey, so this is happening—even to me as a hippo. And I have realized that I need to do better, so maybe we can all do it together.’

Stoo Metz
Norris in character at a Point Pleasant Park performance of the play last year.

What was the best part of taking this play on the road this summer?

I feel like for me, personally, the best part was feeling like I was really doing something for summer. I feel like so many times we feel like the summer just flies by and you didn't do anything. And I look back and I feel so, so lucky.

The show is outdoors and really uses the environment as a character of the play itself—but riskily, it travels to a host of different locations. How did you adapt to performing in a different pond or field every night?

We show up something like an hour or two before and we’ll map out a very wooden box of a show, where it’s like “this needs to happen here, on top of this hill.” It’s kind of another aspect of playing with the environment.

There’s a whole point in the play where I find my book—and it’s hidden in a new spot for every single location. It’s been really interesting because the pond itself was difficult to walk through. And then all of a sudden, I'm able to move: Performing on the grass? There's no issue there. I can walk around.

It can be nerve wracking, but we kind of find some little hidden gems throughout the show. 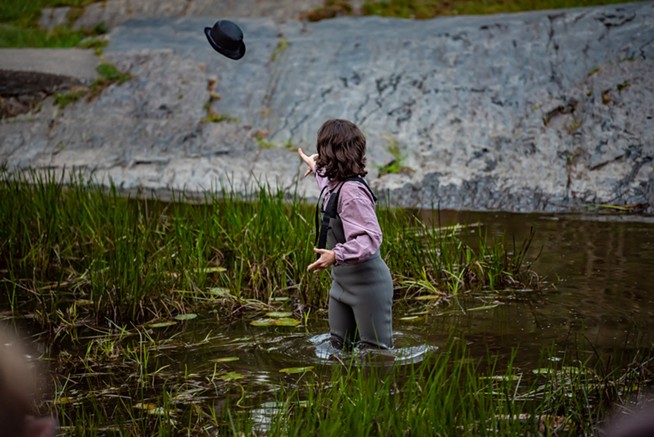 Stoo Metz
“It's nice that the show can move and change wherever we go.”

When I first saw that The Unnatural Disaster Theatre Company was taking this show on the road, I thought it was such a great idea. How did that come about?

[Show writer and director Logan Robins] really wanted to do the show again, and we set it up with some festivals. Then, Kat McCormack of Eastern Front Theatre said “No, not right now. It's not gonna work for here. This deserves to be outdoors.” And apparently, she suggested, “Hey, why don't you take it around to different parks by a pond.”

And so, Logan looked into it and he emailed and called anybody with a park, anybody with a theatre that would be willing to have us. And we created this really fun tour over this past month. I've gotten to go more places this summer than I have ever been any summer. And it's just been a really cool experience and it's really changed our show: It's nice that the show can move and change wherever we go.

Do you think this could be the start of more theatre from Halifax travelling the province?

I would hope so. I think there is good theatre out there that a lot of people don't have a chance to see, because of their kids, because they can't come into the city, because it's only on at certain times. And I think smaller productions like this, with a really great meaning to it, bringing it around the province (or anywhere you can) could be made possible—and really cool and really fun.

I would hope that if anyone else went on tour, they'd also have the lovely experience I do. And like, we stayed in some motels and things. It wasn't a glamorous lifestyle at all, but honestly, it was so much fun. And it was really great to do the show in a different way, because I got to be a lot closer to the audiences. When you perform in a theatre, you know, the lights are in your eyes and you can't really connect with anyone. But with these shows, I really feel like I can connect with [the audience] and look them directly in the eyes. It's kind of weird, because some people aren't used to that.

But I think it's really cool and I think a lot of people would enjoy the show—or shows like this—more than they think. But I would really love to see some shows that are probably being performed in places in Nova Scotia that I've never heard of or people would bring more shows here. People enjoy it. They'd love to go see theatre.