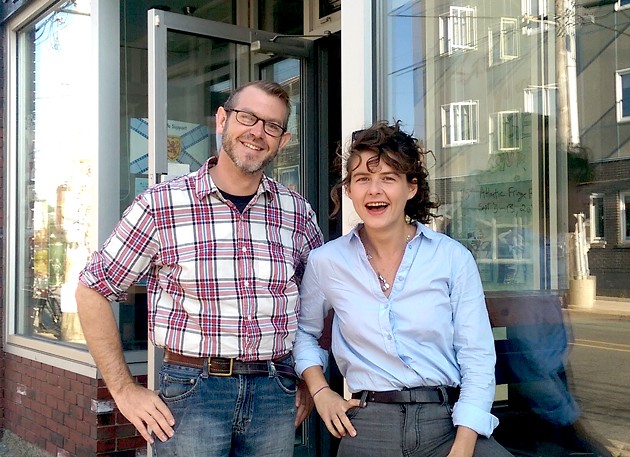 The Bus Stop Theatre
New executive director Jeremy Banks & outgoing director Clare Waque
Last month, The Bus Stop Theatre announced the hiring of its new executive director, Jeremy Banks. After incorporating as a non-profit co-operative in 2013 and establishing a Board of Directors, Waque's vision to transfer leadership was accomplished with Banks, a west-coast arts and culture administrator who moved to Halifax two years ago. We caught up with Banks for a Q & A about his new position, the value of the theatre, and what the future holds.

Can you tell me a bit about your background? You're new to Halifax?

New to Halifax? Suppose so. This is year two in Halifax, but I've been here long enough to attend Dalhousie, join Deepwater Church, volunteer on the board of Eastern Front Theatre, work to make democracy better with Springtide Collective, put pianos in public with #PlayMeHfx and join ArtsHalifax, HRM's arts advisory committee. I'm also working with artist Eryn Foster on a project with the Dalhousie Art Gallery and Dalhousie Urban Garden Society - so there's that too. My background is in arts on the west coast, where I founded a festival, managed small theatre and ran marketing for big theatre. From there I found a passion for places where arts and culture meet Urban Design. You quickly discover arts and culture create economic growth - it's one of the ways Ontario created jobs and supported growth during the '08 recession, and it still works to create growth today in the communities that invest in it.

How did you hear about the Bus Stop and when did you get involved?

How can you not hear about the Bus Stop? It's the place for independent, innovative and alternative live events: theatre, festivals, music, performance art, art shows, and I'm totally into that! I attended the Bus Stop first as an audience member, then later started making plans with friends to host shows. Now I'm an Executive Director. Who knew?

Why was this position appealing to you? Why did you take it on?

I took on this role with the Bus Stop because it's a place where urban change meets arts and culture - it's a community hub, a platform for sharing your message and a place that locals have come to know and love - situated in one of the most diverse neighbourhoods in Halifax. With that in mind, it's a role doing exactly what I love - bringing together communities, supporting economic growth, and doing it in a way that supports as many people, organizations and performers as possible. In fact, it's the only place of it's kind in the Atlantic Region's largest metropolitan area - a gem found nowhere else in the maritimes than on Gottingen Street.

What do you hope to develop in your time as Executive Director?

I hope to support the legacy and community that Clare has fostered over the years - there's a great community of people who love and support the Bus Stop Theatre Cooperative through their membership and contributions on our board - especially Colleen MacIsaac, our Board Chair, who has worked with Clare since the first murmurs of creating a cooperative. So really - I hope to keep doing what Clare and the Bus Stop Theatre Cooperative have been doing: giving artists, community members and locals a place to perform, incubate and create in Halifax.

Christian Aires
What do you think is special about the Bus Stop as a venue and a space?

Clare asked this at a meeting the other day - I think she was fishing for a compliment because ever since coming to Halifax, I've known that the Bus Stop is the place to see unique, sometimes odd, and often groundbreaking performances - its the only place of it's kind in Halifax and Atlantic Canada, and because of that it's often a place where professional artists present new works before taking them nationally and internationally. It showcases not just regional artists, but international ones - a platform to present, connect and grow in a way that just can't be done elsewhere.

What are your favourite kinds of events? Theatre? Music? Etc?

That's a hard question. The best of anything is always a favourite. But THE favourite kind of event for me? The ones that brings everything together. A theatre show that involves a live band and incredible visual art, or an art show that has a great live performance and music, or a concert that's really well-directed - and the best part is when it's not from a professional - like when your friend does a great mixed-media performance over a well-designed mixtape style-musical score that involves eye-dropping visuals and it sells out. That's the type of show you just won't see anywhere else. It's why I love the Bus Stop!

Click here to become a member of the Co-op or for more info on programs and events.