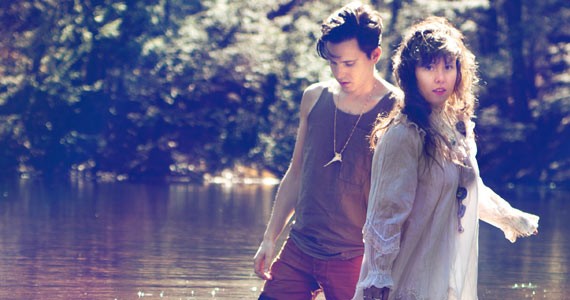 We don’t mean to alarm you, but there’s a bit of water on the stage.

Megan James' long, curly hair is freshly cut in preparation for Purity Ring's Halifax gig. The singer's mane had four months of tour growth, and her bangs were driving her crazy. The 24-year-old wanted to look like a prairie girl, and she does.

We meet at Java Blend, but James asks to leave in favour of Mary's Place. "I know too many people here." Friends stop her as we leave. They've been listening to her album on the car stereo. She brushes off the compliment.

Purity Ring has changed Halifax for James. Strangers approach her in the streets, singing her praises. "I'm excited for your show next Thursday," they tell her. "Thanks! What's your name?" she replies.

And asking her to chronicle the band's success is a tall order. "It happened so fast it almost feels like it happened all at once," she says.

Exactly two years ago, James packed up her things and drove from Edmonton to Halifax with her mom. She arrived during the Halifax Pop Explosion. Around the same time, Corin Roddick, the 21-year-old who would become Purity Ring's other half, moved from Edmonton to Montreal.

The two had admired each other's music when they both lived in Edmonton. Now apart, in different cities, Roddick emailed her a melody. James recorded herself singing over the tune in her bedroom, and sent it back to him. They flew home to Edmonton for Christmas and recorded the song "Ungirthed"---an immediately catchy electro-pop track.

A week later came their first inkling of success. Roddick had posted the song online, hoping friends would listen. "It went up and spider-webbed out onto so many blogs," James says. Suddenly the track was on Pitchfork. The duo knew it would be a missed opportunity if they didn't keep at it.

Two more singles, "Belispeak" last fall and "Obedear" this spring, kept the band's growing fanbase in suspense. James' eerie lullabies and Roddick's choppy hip-hop-infused beats were a breath of fresh air for Canada's music industry. The entire album took a year- and-a-half to record. They managed it in small bursts, on week-long trips, one or two songs at a time.

"We released the song [Ungirthed] in January, and in October we were in Paris, playing," James says. "It was really weird."

In the lead-up to the album release, Purity Ring toured through Canada, the US and Europe. When Shrines dropped in July, it blew up, prompting glowing reviews from friends, strangers and international media.

All that touring honed the duo's live show. Purity Ring's set sounds just like its album, with one difference. Live, Roddick likes to mess around with James' voice. He runs it through a mixer so he can manipulate it in real time.

The atmosphere of Purity Ring's show is equally important. It must be as ethereal as James' voice and as alien as Roddick's beats. Cocoon-like light pods follow them to club shows. "We spend a lot of time and thought on lights," James says. Roddick built touch-sensitive lanterns that are programmed to light up when he hits them. Like a synth, they play the melody of each song.

In fact, atmosphere is so important that James unintentionally upped her indie cred when she refused to play The Palace. She's never been there, but a friend told her it wouldn't mesh with the duo's set. "Don't play there," he said. When the Marquee came up as an option, Purity Ring pounced.

"Our shows are far better when it's a beautiful setting," James says. "I was pretty particular about our show here, just because it's been such a long time. And I'm sort of nervous about it because I do know a lot of people here.

"I think a lot of people don't even know I live here."

On a recent three-hour flight from Philadelphia to Halifax, James' plane had to turn around. "The clouds are too low," she remembers the pilot announcing. It reminded the singer of a line in one of her songs: "Obedear, the sky is low." She wrote that line about Nova Scotia. "The sky is often so low here."

Her journal, which features Halifax among other places, inspired the lyrics on Shrines. "I've always felt drawn to Halifax for one reason or another," she says.

Halifax is so small, she says, with international success so rare for its musicians. Toronto and Montreal are more central, and hence easier to tour from, with more potential to rub elbows with music industry big cheeses.

Purity Ring has shows scheduled through next spring in the US and Europe, leaving little time to write and record a Shrines follow up---for now. Lesser successes have tempted others away. But James doesn't want to leave.

"It's far, but it's pretty easy to go to Montreal if I need to," she says. "I love being able to drive to beautiful beaches in 20 minutes, and hanging out at people's houses and having amazing food at the market. It's really easy for me to live here."